Game On! … in Ruth’s battle with depression 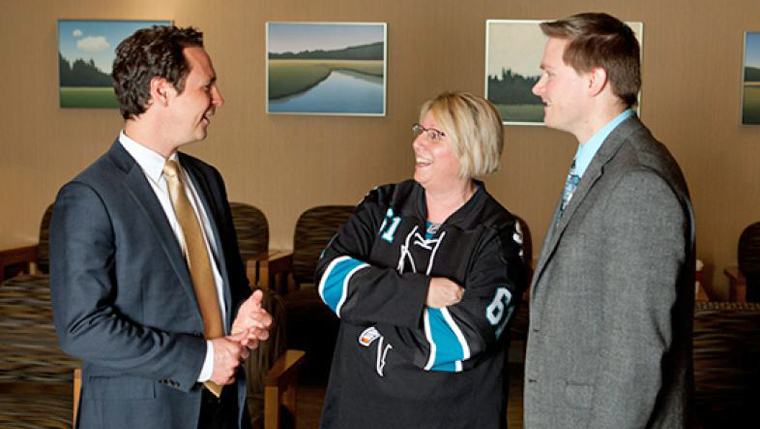 Ruth Tibesar with the physicians she calls her "two knights" who she says inspired her and helped her in her battle with depression.

For many years, those lucky enough to share a work space with Ruth Tibesar, a lab technician at Mayo Clinic in Rochester, had come to expect to hear at least one thing when they came to work every day: Laughter. Because that's just the kind of person Ruth Tibesar is -- she enjoys making those around her smile. But a little more than two years ago, that laughter disappeared soon after Ruth's mother passed away. Soon after that, Ruth suffered a mild stroke while at work, and it was while she was in the hospital recovering that she says she began to feel herself change into a person she and those around her no longer knew.

"I was angry," Ruth says. "I wasn't talking to anyone. Something had changed. But then I just went on like nothing was wrong."

Once she left the hospital, however, Ruth began to realize something was, in fact, very wrong. "I started to withdraw from things and stopped talking altogether, which is odd for me," she says. "I began to isolate myself. That was a real trigger that something wasn't right." As were the sleepless nights. "Insomnia was another huge trigger for me," she says. "It gave me too much time to think."

Still, she didn't feel like she needed help. Instead, Ruth says she went on living this way until she reached a point where she eventually just "went numb" inside. "I got to a point where I felt nothing," she says. "I had no emotions. I just stopped caring. I felt like a piece of mud -- like nothing. There was no spunk. No drive for the next day."

And that's when she says the suicidal thoughts began. "I remember calling my brothers one night when I thought I wasn't going to make it and I said to them, 'Just listen to me. Would you miss me if I was gone?'" It was a question that took her brothers by surprise, but one she needed an answer to nonetheless. "I told them, 'I have to know. I need to actually hear you say it,'" Ruth says. And so they did, just as her husband and co-workers had, as well. It was then that Ruth and those around her decided she needed help.

Prior to that point, Ruth says she had tried a variety of antidepressant medications under the guidance of her family medicine physician at Mayo Clinic, but none of them seemed to help. "No matter what they tried, nothing was changing," she says. "They couldn't get my numbers on the PSQ-9 patient health questionnaire for depression down."

Her family medicine physician then asked if she would consider being admitted to Mayo's Mood Disorders Unit at the Saint Marys campus of Mayo Clinic Hospital – Rochester for further treatment of her depression. "I just said, 'Whatever,'" Ruth says. "I didn't care what happened to me at that point. I wanted to be gone, personally."

After being admitted, Ruth underwent a combination of behavioral and Electroconvulsive therapy (ECT), a form of treatment in which, according to MayoClinic.com, "electric currents are passed through the brain, intentionally triggering a brief seizure." It's a form of treatment that can sometimes "cause changes in brain chemistry that can quickly reverse symptoms of certain mental illnesses" and one that "often works when other treatments are unsuccessful."

It's also one that Ruth says is hard to go through. "It's anesthesia every time," she says. But, it was also something that showed signs of helping. "The bad thoughts and memories did go away for a while," Ruth says.

After her initial round of ECT, Ruth was placed in to the care of Kyle Cedermark, M.D., a fourth-year fellow who now works in Mayo's child and adolescent psychiatry program. After meeting Ruth and assessing her condition, Dr. Cedermark began working closely with her on therapy and medication changes in an attempt to find that magic combination that would return her to the happy, spirited frame of mind she once knew. It was a combination they would try to find over five hospitalizations, a journey Ruth says was also sometimes hard to endure. "Therapy, change of drugs, ECT, hospitalization … it was all coming at me," she says. "I could have just quit. That would have been the easiest thing to do. But Dr. Cedermark made me realize that there was something about me -- that he wasn't going to quit on me. And so he made me not quit on me, either." 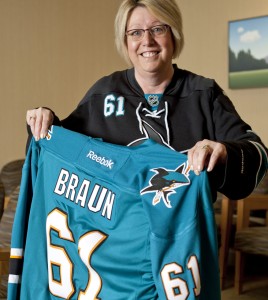 Ruth Tibesar found inspiration in watching her nephew play hockey, and looking at her treatment like one big game, with her physician as her coach.

Ruth would also find another source of inspiration when her nephew Justin Braun began playing professional hockey for the San Jose Sharks. From that point on, she says she began to look at her therapy and treatment plan like one big hockey game, with Dr. Cedermark as her coach. "I decided I needed to start acting like a hockey player," she says. "I needed to listen to my coach. I needed to make every practice and every game. That meant not missing appointments, not missing therapy, taking my medications, not missing ECT treatments or even hospitalizations if need be."

Besides wanting to be around to watch her nephew play hockey, Ruth says another reason she decided not to give up on overcoming her depression was because she didn't want that to reflect poorly on her coach, Dr. Cedermark. "I once said to Dr. Cedermark, 'I don't want to commit suicide because I don't want the clinic to look down on you if you lose one of your patients,'" she says. "And he said, 'What?!' But I was serious -- that's just how I was thinking at the time. And he said, 'No, no. That's not how this works.'"

From that point on, and with that new understanding, Ruth says she began to do "very well for a while" but then took "a big step back" when it came time for Dr. Cedermark to move on to another clinical area with the end of the academic year. "That was really hard from a mental standpoint because we had been trying everything and I'd come to rely on him," she says. Before he left, however, Dr. Cedermark had taken the time to find a replacement who he thought would be able to step right in and pick up where he and Ruth had left off: A resident by the name of Robert Morgan III, M.D., who Ruth says she warned right away that he'd have his work cut out for him. "I told Dr. Morgan that, too. I said, 'This isn't going to be an easy transition for me,'" she says.

And it wasn't. But by working together, and by sticking to her credo of never missing an appointment, therapy session, treatment, or medication, things slowly begin to move in the right direction again. "In the fall of 2013, I started to notice a difference," Ruth says. "We had finally figured out the medications, and I started to do more things. I started being more social. At work, you could actually hear me laugh again."

And she says along with her husband, her nephew, and the rest of her family, it was her work, and her colleagues, that served as another big source of inspiration for her to get better. "I wanted to get back to work," she says. "That was my strength."

Now that she has done that, she says she wants to give that same strength to others who might be going through the same thing, as well as shine a new light on depression by making it something that's no longer "taboo" to talk about. "There were times when I said I just wish this was cancer because people understand that so much better," Ruth says. "When you have depression, people sometimes think it's made up."

Dr. Cedermark notes that some patients resist getting the help and treatment they need because of the personal nature of depression. "It's a very personal problem, and something that's often very difficult to share with others," he says. "But depression is becoming more widely recognized and more widely screened for, so most internal medical programs now offer screening exams for depression when they have a clinical suspicion."

And that's why both Drs. Morgan and Cedermark say it's important for everyone involved to start thinking of depression in the same way as other chronic illnesses like hypertension or diabetes, and then to get the help and treatment needed to manage the symptoms. "I think the biggest question to ask is: 'Is it interfering with your life on an everyday basis?'" Dr. Morgan says. "And if it seems like your mood has been lower than normal and really interfering with the things you would normally like to do and your ability to love, your ability to work, your ability to play, then it's time to get some help. Depression is a treatable illness and certainly nothing to be ashamed of."

It's also something you can come back from. Just ask Ruth Tibesar. "It feels so good to be back," she says. "To be able to sit down and talk to people again like I always used to do. I'll never again walk down the street again without saying 'Hi' … to somebody."

What a powerful experience to share with others! There is not much I can say about your form of treatment, since I know very little about strokes, where it affected your brain or how much it contributed to your depression. What I can say is that you have a lot of inner strength and a will to survive and many times, life does feel like a game where we want to go across the finish line or make that goal. My hope for you and others experiencing mental illness, is that you live your life authentically and not to please others all the time. We have a wonderful world with many places to visit, new experiences to cherish and just the simple things that we take for granted, like being with our loved ones or seeing a new show. My hope for you and others that have gone through this difficulty journey is that you never limit yourself and never give up on all the possibilities. Thank you for sharing your experience, strength and hope.