Twin Sisters Share Many Things in Life, Including New Lungs 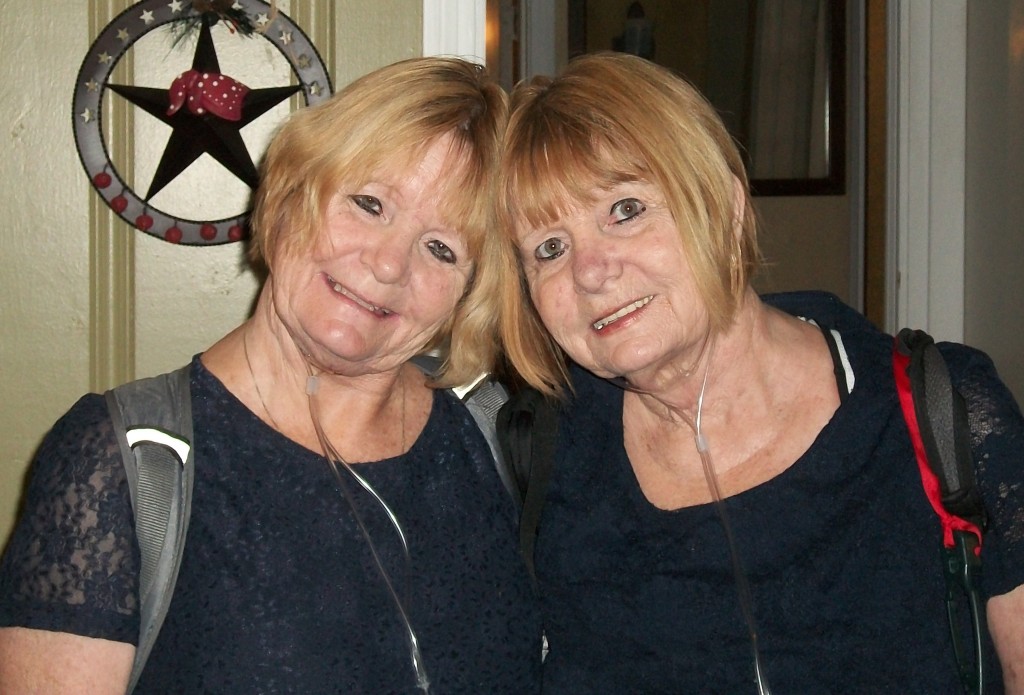 It’s often said that twins share similar traits and have unique bonds that other siblings simply don’t have. Sometimes those traits are things one would rather not share with their twin, especially when it comes to a potentially life-threatening medical condition.

Linda Foster and Brenda Santinelli, 60-year-old twin sisters from Pensacola, Fla., are active women with a love of the outdoors. Hiking, camping, fishing, hunting and other activities were well-suited to both their lifestyles. Both sisters are in long-term marriages. Both have young grandchildren. They even both have 20-plus-year careers at Walmart in their hometown. Both were former smokers who quit several years ago.

So it was more than a coincidence that during separate hiking trips in 2011 both women found themselves experiencing shortness of breath and feeling more tired than usual. To their surprise, they were about to experience another commonality that neither ever imagined – both sisters were diagnosed with idiopathic pulmonary fibrosis (IPF), a potentially fatal lung disease that necessitated they receive lung transplants (or in Linda’s case, a double-lung transplant).

“This came as a complete surprise to both of us, as neither of us had really experienced obvious symptoms of this disease in the past,” says Linda. “But I guess we should have understood the possibility of an IPF diagnosis, since our mother died of the disease and our uncle succumbed to it as well.”

At the recommendation of their local doctors in Pensacola, Linda and Brenda initially sought an evaluation and diagnosis at the University of Alabama-Birmingham, since it was convenient to their home in the western Florida Panhandle. But because their employer-provided health insurance specified Mayo Clinic as their preferred provider for transplant cases, the sisters came to Mayo Clinic’s Florida campus for a full pulmonary evaluation. Both sisters’ conditions were deteriorating, although Linda’s seemed to be progressing more quickly, and they were both listed for lung transplants -- Brenda in December 2012 and Linda in January 2013.

Linda was listed for a double-lung transplant as her condition worsened, requiring she receive continuous supplemental oxygen. Brenda was listed for a single lung, which she eventually received on Oct. 29, 2013. Linda received a double-lung transplant on Feb. 12, 2014. Another coincidence -- both sisters’ new healthy lungs came from women in their 50s.

Linda and Brenda had virtually the same transplant team at Mayo Clinic in Florida managing their care. The team was led by Cesar Keller, M.D., and supported by Francisco Alvarez, M.D., David Erasmus, M.D., Jorge Mallea, M.D. and John O’Dell, M.D., as well as many of the same nurses, medical techs, transplant coordinators and even the social workers handling their cases.

“Our cases were almost identical, from when we first realized something was wrong through our diagnosis and care, up to and including our transplants,” says Linda. “Our team at Mayo Clinic was wonderful, and thanks to their care, we are both slowly getting back to normal.”

“I’m feeling great, walking an hour a day, shopping, exercising and stretching … living my life again,” says Brenda. “My sister and I are both grateful for this second opportunity at life thanks to the generous gift of our donors.”

Both sisters also say that their faith has played an important role in their recovery. “We’ve had quite a few prayers answered and have received support from all our church friends and people we don't even know,” said Linda. “We’ve been truly blessed throughout this entire experience.”

Editor's note: For those interested in raising awareness for the importance of organ donation, the 10th Annual Katie Ride for Life will be taking place on April 12, 2014 in Amelia Island, FL. Funds raised, help to promote organ and tissue donation and deliver important educational programs to high school freshman and sophomores. Mayo Clinic is the presenting sponsor for this event and has close to 200 riders and walkers that participate each year on Team Mayo Clinic, and would love for you to join the ride.