Joyous Victory: Lung Cancer Survivor Finds Her Niche, Gives Back to Help Others 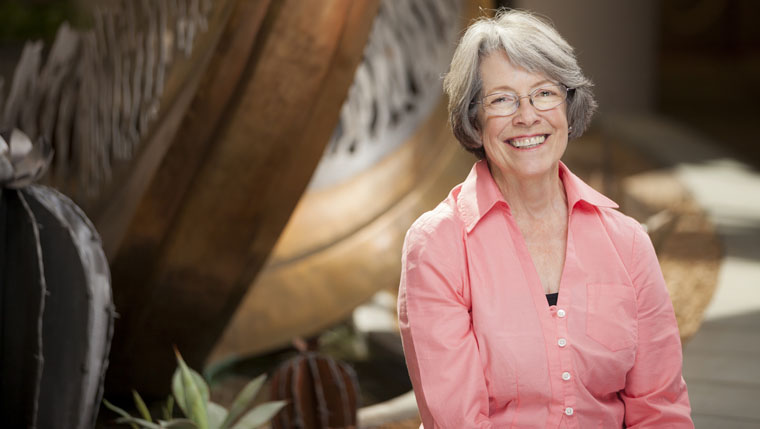 My journey started innocently enough as a neck strain I received while playing with my daughter’s golden retriever in October 2010. As the year ended, the discomfort had increased, and I sought out my physician in January 2011. He set up appointments for MRI and MRA exams. Once done, I quickly ended up at a level I Trauma Center, where I was diagnosed with a tumor on my C3 spine. The full diagnosis was stage IV non-small cell lung cancer with spine and lymph node metastases. The lung tumor was inoperable due to its proximity to the pulmonary aorta. Within 48 hours, the lymph node was removed, and I began radiation on the spine tumor, which lasted 3 weeks.

During that period, a cousin in Southern California suggested I contact Mayo Clinic in Arizona for a second opinion and gave me the name of Dr. Helen Ross.  I had my consultation with Dr. Ross on Feb. 7.

From our first meeting with Dr. Ross, both my husband and I developed a trust and respect for her that continues to this day. Dr. Ross presents a forthright, open and considered respect for me not only as a patient but also an individual. She does not sugarcoat her evaluations. She always questions what has been done in the past and then takes it one step further.

Dr. Ross had the tumor samples re-tested, and it was determined that my cancer was not squamous cell but adeno carcinoma. This change in diagnosis allowed her and her oncology team to prescribe the correct drugs for my particular chemotherapy regimen. I underwent five chemo sessions at three-week intervals. I also suffered a pulmonary embolism and was successfully treated at Mayo Clinic Hospital.

At the end of the chemo treatment, the tumor size had shrunk, so Dr. Ross along with Dr. Steven Schild then prescribed SBRT (stereotactic body radiation therapy) over four consecutive days to target what was left of the tumor in my lung.

One month later, in August 2011, I began participation in a Stage III trial of Lucanix, a vaccine, at the suggestion of Dr. Ross. The trial involved a monthly injection in the arm for an 18-month period and ended in February 2013, when the FDA and the drug manufacturer suspended the trial. I still have no idea if I received the vaccine or a placebo but am grateful to have been part of the trial.

Three years out my tumor has not returned, and I am participating in all of the activities I was involved in before the diagnosis. They include travel, golf, gardening, and spending time with family. To this list you have to add smiling and laughter, an enhanced appreciation and respect for life (and I don’t just mean my own).

As a child I was curious about my name because it was so unusual. It is Greek in origin and means good victory or joyous victory. It ended up being a core belief that I had in myself as a youngster and still do.

It is my belief that my fortuitous involvement with Mayo Clinic in Arizona has been instrumental in my recovery and my life these past few years. We have participated in several cancer and lung cancer survivor meetings at Mayo. They have been very helpful.

As a former personnel manager, I like to ask technicians and clinicians, "How long have you been at Mayo?” or “How did you come to be employed at Mayo?”  The overwhelming percentage have worked at the clinic for several years and are happy with the choice they made. Those are the type of people I want to be treating me. I like to think they found their niche, and I have found mine.

For me and my husband, the thing to do in the future is assist Mayo Clinic and the Bonnie Addario Lung Cancer Foundation in their ability to fund and run clinical trials to diagnose lung cancer at an early stage. We need to find better and better treatment protocols for this very difficult disease.