A Kidney Between Friends 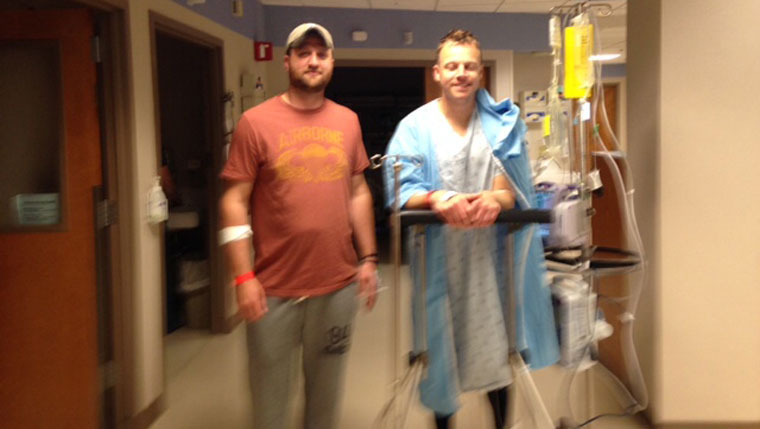 Todd Goldrick was living the dream. Good job. Loving wife. Two young, healthy kids. Weekends spent playing golf, softball, kayaking, hiking, running or just hanging around home with the family. But that changed suddenly in 2010, when he and his wife simply tried to buy some life insurance. He was just 28.

"Mine came back straight out denied," Todd says. "They told me the reasons. There was a whole long list -- high cholesterol, high blood pressure, and a few other things that I don't remember exactly."

Before that day, Todd says he'd been to see his doctor in the Minneapolis–Saint Paul area "maybe every two years," so the policy denial came of left field. In fact, he says it scared him into doing nothing about it, at least initially. "I was kind of naïve and a little scared to go back to the doctor," he says. "So I didn't do anything."

Six months later, he got a sinus infection that wouldn't go away, and eventually he went to urgent care, where some flags were raised unrelated to his sinuses. "They took my blood pressure, and it was 200 over 120," he says. "At that point, they told me I needed to go to the ER."

When got to the nearest emergency room, the news got worse. After a series of tests, doctors informed Todd the reason his blood pressure was so high was that his kidneys were failing. "My kidney function was 40 percent," he says. "So they set up a meeting with a nephrologist and put me on blood pressure medicine immediately."

The nephrologist took a biopsy of Todd's kidney that would confirm that he had Alport syndrome, a genetic disorder that damages the blood vessels in the kidneys. "The biopsy did confirm that I had Alport syndrome," he says. "My doctors then told me I was looking at having a transplant within the next six months, because I was declining so quickly."

After his diagnosis, Todd was referred to Mayo Clinic in Rochester, Minnesota. His health continued to decline. "During the next three months, my kidney function went from 40 percent to 20 percent," he says. And as his physical health deteriorated, so too did his mental health. "Mentally, I struggled," he says. "I didn't work out. I stopped living my active lifestyle. I just kind of thought, 'What's the point?'"

"I remember them telling me, 'You might have to have two transplants in your lifetime because of your age, so the best thing you can do now is to see if you can prolong that a little bit by buying yourself some more time.'" - Todd Goldrick

The point, it turns out, would become evident a short time later when he finally decided to do something about his medical situation. "I started to get more educated," Todd says. "I started listening to my doctors more, and I also became involved with the Alport Syndrome Foundation, and that helped a lot." That involvement would also lead to new friendships. "One of my good friends now actually had an Alport's golf tournament and has had two kidney transplants himself," he says. "I really connected with him. He started telling me his story, and I started to realize that maybe I can do something about this."

That's what his doctors at Mayo had told him, too. "They really encouraged me," Todd says. "I remember them telling me, 'You might have to have two transplants in your lifetime because of your age, so the best thing you can do now is to see if you can prolong that a little bit by buying yourself some more time.'"

Todd says he also changed his diet, with some help from his wife. "They told me to stay on a strict low-potassium, low-phosphorus, and low-sodium diet, and my wife was a big help in that," he says. "We just changed my whole lifestyle, and I really started feeling better."

Instantly, in fact. And the response from his kidneys, he says, was just as impressive. "What happened by me doing all of this was that my kidney function actually plateaued at 20 percent for the next 3.5 years," Todd says. "I maintained that 20 percent function for that long. And in doing so, I just kept pushing out my transplant, even though in the back of my mind I kept wondering, 'Okay, when is this going to happen?'"

Even though they didn't know when the time for a transplant might come, Todd's family and friends wanted him to be ready. So shortly after the transplant talk began, they sent out emails to everyone they could think of to let them know what was going on. "I had a lot of people come forward," Todd says."There were probably 10 people who offered to be donors."

One of those 10 was an old childhood friend, Marty Yeager, who Todd says he hadn't seen or talked to much since college. "When he got tested, I just knew he was going to be the one," Todd says. "And I didn't know it at the time, but he had the same feeling as well. We both just had that hunch." They were right. "He was my match," Todd says. "He's my age, and it just worked out perfectly."

While the testing may have worked out perfectly, Marty says there were some bumps in the road that he needed to smooth out on his end before going through with the transplant. "A lot of people close to me had an issue with me being Todd's donor," he says. "I heard so many 'What if?' scenarios that I was starting to get frustrated. But I didn't care if people didn't agree with me. The simple fact was that my friend needed a kidney, and I was his match. That was it."

Marty says he and Todd decided to hold off on the transplant until it was clear the time was right. "In the meantime we were able to go on several fishing trips together and really reconnect our friendship and our families," Marty says. Then, about a year later, Todd's health began to worsen. "I started feeling bad again," Todd says. "I couldn't keep up with my kids, and that's what really hurt. I also couldn't help my wife around the house like I wanted to. I was talking to Marty about all of that and at that point, he just said, 'Okay, let's go. Let's do this.'"

"One thing I did notice about my doctors is that I never felt like I couldn't ask a question. Their bedside manner is just unbelievable, and that definitely helped me, as well." - Todd Goldrick

So Marty and his family drove to Rochester from their home in Indiana. The morning after they arrived, Todd says both he and Marty were prepped for a transplant operation he describes as "seamless" from beginning to end, thanks in large part to both his care team and the friend he had by his side. "I thought I was going to be a nervous wreck," he says, "but having Marty there really helped keep me calm."

Martysays he kept it together before the surgery, but when his wife, Erin, came into his room after the surgery to tell him everything had gone smoothly and that Todd was doing well, "I lost it," he says. "I cried like a baby. I didn't care how I was doing. My eyes were open and I was coherent. I knew I was okay."

Aside from a little routine post-surgery pain and discomfort, Todd says both he and Marty soon impressed their care team with their quick recoveries. "We both had some pain after the surgery, of course, but by that night Marty was up walking around and encouraging me to do the same," Todd says. "By the next morning we were both up and walking around."

It wasn't long, Todd says, before they were doing more than just walking. "There was a nurse's station three doors down from us … and we were challenging each other to see how many laps we could do around the station," he says. "That really helped us, because we kept pushing each other. Marty was rebounding very quickly, and I think that's what also helped me. It really was amazing." 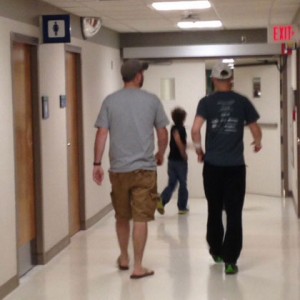 So, too, was the short amount of time both men spent in the hospital after the surgery, though Todd says credit for that extends beyond him and Marty. "I think a lot of that had to do with us listening to our doctors and nurses, understanding our medications, and then after the transplant, just trying to be as active again as possible."

One way they did that, Todd says, was to buy activity tracking devices that allow them to see each other's progress all the way from Minnesota to Indiana. "That's been the biggest motivation for me," Todd says. "The doctors wanted me to walk at least 2,000 steps a day, and I've been averaging around 10,000. Marty's been doing about the same. Getting active again has definitely helped our recovery time."

As did his care team at Mayo, he says. "One thing I did notice about my doctors is that I never felt like I couldn't ask a question," Todd says. "Their bedside manner is just unbelievable, and that definitely helped me, as well. And while I don't know what the future holds, I do know that if I can keep up with my active lifestyle and continue to make good choices when it comes to my health and continue to listen to my doctors, I'm hoping this new kidney will be with me for a long time."

It better stay with him a while, Marty says, because now that they've reunited, the two friends are making plenty of plans for the future. "We text nearly every day now and talk about all the stuff we want to do," he says. "This whole thing has been a great experience and I'm so grateful to have been a part of it."

Awesome! Love your story I was a Kidney donor for my Father in 1984 at Rochester Mn the staff and Nurses are the Best ! What A great and selfless gift your friend has given you. Love and prayers!!!