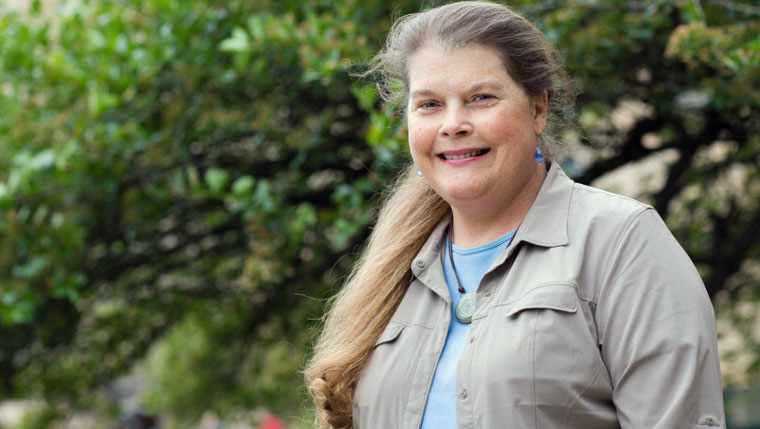 You never know how an experience – even a negative experience – can shape the rest of your life. Decades ago, when Jane Applen-Anderson came to Mayo Clinic Hospital, Methodist Campus, in Rochester with her leg swollen to three times its usual size, she wasn’t thinking about what good could come out of it.

She would come to learn she’d been bitten by a poisonous brown recluse spider. Mayo Clinic doctors treated her infection, removed the dead tissue, and worked to repair the damage done. They saved her leg, and they saved her life. That was just the first time.

While in the hospital, Jane was informed that tests showed her type 1 diabetes needed to be regulated more closely. Otherwise, she could lose her kidney function and her vision within the next year. Refusing to let the condition bring her down, Jane carefully followed her diabetes self-care plan. “You have to be a responsible patient, and do your part to follow your care plan,” she says.

It worked. For 25 years, her kidney function remained stayed stable, thanks to better diabetes control, diet and exercise. Along the way, Jane also went through numerous laser eye treatments to save her eyesight from diabetic retinopathy, as well as cataract and retina surgeries on both eyes, all due to diabetic eye complications. “Mayo Clinic saved my eyesight repeatedly,” Jane says.

“Prior to transplant, I had some reservations,” she says, noting that the rigors of living with diabetes had taken a toll and she was tired of having to be strong. “I was concerned about whether I would receive a transplant in time, as well as fear of the unknown.”

A pep talk from her husband changed all that.

“Steve looked straight into my eyes and said, ‘you can’t stop being strong now. You’ve been training all your life for this, and now this is the big show. You can do it, we can do it, so be strong and be tough,’” she recalls. “Steve has always supported me, helped me deal with illness and been such a rock. He is amazing.” Steve is the scientific glassblower in Mayo Clinic’s Division of Engineering.

While on the transplant list, Jane took regular blood tests and closely monitored her diet. For almost three years, Jane opted not to leave Rochester, because she did not want to be out of cell phone range for the “transplant phone call.”

“You have to play your part if you are serious about receiving a transplant, and be available if and when you receive your call,” she says. While the diet was “very complex,” Jane was adamant about following her transplant team’s orders. “Patients have a responsibility to follow doctors’ orders … because the doctors are dedicated to your care, you need to be too.”

After over two years of waiting, Jane’s patience paid off. She received a call saying there was an organ donor match. The transplant team was set to do her transplant on Oct. 11, 2011.

“The first thought that went through my mind was that someone had died and that their family was sad somewhere,” she says. “The second thought was that I had a chance to live because of the donor’s grace and that I would do my best to honor this precious gift of life.”

Jane’s recovery was relatively short; she returned to work in three months. Thanks to her doctor’s suggestion to replace her pancreas as well as the kidneys, she no longer suffers from type 1 diabetes. She still monitors her health closely, however, partly in honor of her generous donor.

“I am thankful to be alive every day. I owe my life and my vision to Mayo Clinic at least three times,” she says.

Jane remains optimistic about the experiences, thankful for the care she receives at Mayo Clinic, and grateful to all of her doctors and transplant teams, for the donor’s gift, for the support from her husband, family, co-workers and friends, and even for the serendipitous brown recluse spider that may have saved her life.