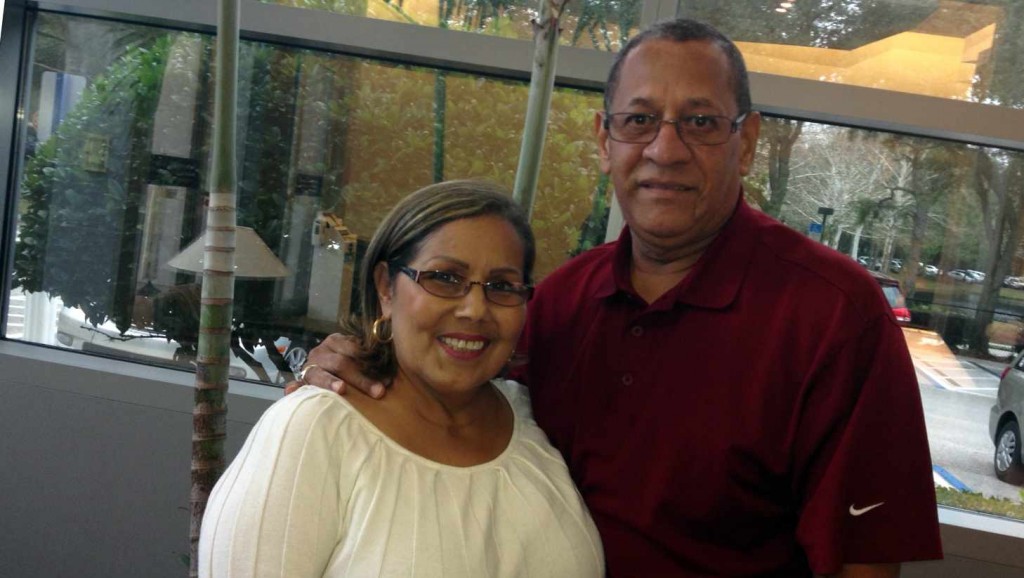 For most organ transplant recipients, receiving the “gift of life” is a one-time experience. But for Nellie Betancourt, battling the hepatitis C virus that had been in hiding in her body for years required another “second chance at life,” thanks to a second generous donor and a new generation of anti-viral drugs.

Betancourt, a 56-year-old mother of two and grandmother of seven from Puerto Rico, was first diagnosed with elevated liver enzymes during a routine exam in 1995. Further testing revealed a positive result for the hepatitis C virus, which resulted in several rounds of standard anti-viral drug treatments over the next several years, none of which were successful in effectively managing her disease. This began a 20-year battle with hepatitis C that was to eventually include two liver transplants performed at Mayo Clinic’s Florida campus.

“By 2002, I was told that my liver enzymes were rapidly increasing, and that I’d eventually need a liver transplant or face liver failure,” says Betancourt. “I was only 42 years old at the time.”

Looking for answers, Betancourt then went to the Clinic of Americas in Puerto Rico where she had her first exposure to Mayo Clinic. Mayo participated in a program where they periodically sent transplant physicians to Puerto Rico to evaluate potential transplant patient candidates. Betancourt was evaluated by a Mayo physician visiting Puerto Rico, who determined she was a good candidate for a liver transplant. She decided to go to Florida to be listed for a liver transplant and have the surgery once a match was found.

Betancourt received a new liver in October 2004 and appeared to be doing well after surgery. But the good news about her recovery didn’t last long, as the hepatitis virus returned about two months after her transplant. Treatment with medications began immediately, and Betancourt went back to Puerto Rico to resume her life. The treatments seemed to work at first, and her virus was almost undetectable. But in 2007 during a scheduled exam, it was clear that her liver enzymes were again on the rise. The persistent hepatitis C was damaging her new liver.

Another regimen of anti-viral drug treatments was ordered, but eventually a second liver transplant was necessary. That surgery occurred in January 2011 at Mayo Clinic. However, her battle with hepatitis C still wasn’t over. Betancourt experienced a relapse several months after the second transplant. Even though she was placed on traditional hepatitis C treatments after her transplant, they were again ineffective in clearing the resistant virus.

This time, her hepatologist, Barry Rosser, M.D., decided to be very aggressive in her treatment to control her relapse and save the second liver. He put his patient on a newly approved anti-viral drug, which she received for 12 weeks. Betancourt was one of the early patients to be put on this new drug at Mayo Clinic. The treatment seemed to work, and her hepatitis C was virtually undetectable after only four weeks on the medication. With close monitoring and follow-up care, Betancourt’s disease finally seems to be under control.

Betancourt and her husband, Marcelo Castro, now split their time between Puerto Rico and Jacksonville so she can remain close to Mayo Clinic as part of her post-transplant monitoring.

“Today I’m doing well, trying to lead a normal life, remaining emotionally stable, physically active and staying optimistic,” says Betancourt. “I want to thank my donors who have saved my life more than once. Organ donation truly does save lives.”

Betancourt also acknowledges all of her Mayo Clinic caregivers, from physicians and nurses to transplant coordinators and even her translators, for the exceptional treatment that she received.

“Mayo Clinic has given me my life back, thanks to the caring and professional people I have interacted with over the years here,” she says. “They’ve helped make this difficult journey a just little bit easier.”