An Extension of the Heart 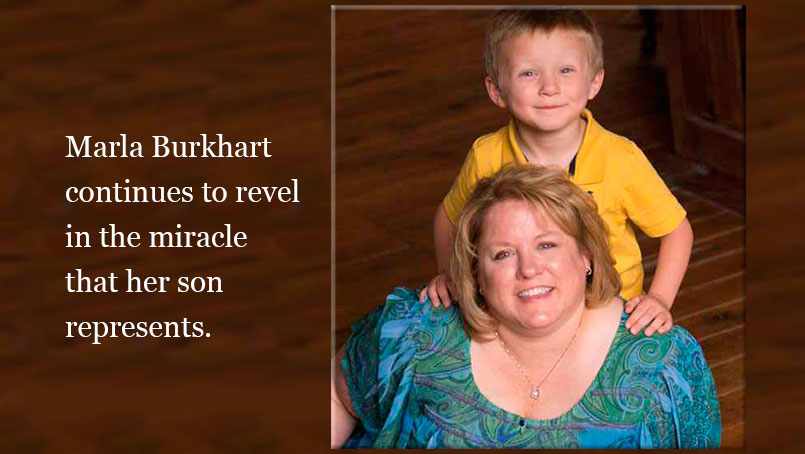 Marla Burkhart’s heart was functioning at roughly 30 percent when she was rushed to the hospital for an emergency cesarean section eight weeks before the due date of her first child. After she and her husband had chosen a name for their child, she placed her faith in her heart and the support of a network of family, friends, co-workers and Mayo Clinic staff, as baby Noah was rushed to the Neonatal Intensive Care Unit, or NICU, and Marla, to the Critical Cardiac Care Unit.

Just three hours prior to the surgery, Marla had been diagnosed with peripartum cardiomyopathy, a rare pregnancy-related heart condition. Occurring in roughly 1 in 3,000 deliveries, it is the result of an enlarged, weakened heart. The condition is generally diagnosed during the last months of pregnancy and causes inefficient blood circulation.

Marla originally thought her symptoms were just normal changes resulting from her pregnancy. Even when her legs gave out at eight weeks, she shrugged it off. She had problems sleeping due to shortness of breath, and she eventually had to sleep upright.

Marla switched to Mayo Clinic from another provider in the middle of her pregnancy because she had struggled with becoming pregnant in the past and says she wanted the best possible care. At her 32-week appointment, she described her continued discomfort to her physician. An ECG revealed an abnormality. She was shocked by the diagnosis.

Five years later, Marla says she is eternally grateful to Mayo Clinic and cannot imagine the outcome if the peripartum cardiomyopathy had gone undetected. And her heart could not be happier as Noah is now a healthy little boy.

Today, Marla continues with routine heart check-ups every six to 12 months. She also takes extra steps to take care of her heart outside of the doctor’s office by eating healthy foods, avoiding stress and exercising regularly. Her family likes to get up and get moving, from experiencing nature at Quarry Hill Nature Center in Rochester, Minnesota, to exploring new locations near and far. Since her heart event, she has become much less apt to “sweat the small stuff” and tries to live in the moment in all that she does.

Hooked up to a number of monitors, Marla was wheeled down to the NICU to celebrate what happened to be her first Mother’s Day with her baby boy.

In addition to taking care of her own heart, Marla also has become increasingly involved in Rochester’s “Go Red for Women” initiative. Last year, she spoke about her experiences at the group’s February luncheon. Even though it was out of her comfort zone, she said that she hopes that by telling her story, she can help spread vital information about peripartum myopathy to help “a sister or a cousin or a friend who is having a difficult pregnancy and isn’t getting the answers they need.”

Marla says she hopes to send the message that women shouldn’t look after themselves last, or feel as though their problems are a burden to others. Women’s heart health is important, and it deserves to be prioritized, she says.

In her case, that also means staying connected. “A great support system is key. Make sure you have positive people around you,” she says. “It could be anyone. It could be co-workers, it could be friends, it could be family. And that isn’t just a heart health issue, that’s a living life issue.”

Marla recalls the first time that she saw Noah. They had been separated for three days when the cardiology nurses insisted that she be able to see her baby. Hooked up to a number of monitors, Marla was wheeled down to the NICU to celebrate what happened to be her first Mother’s Day with her baby boy. To this day, she continues to revel in the miracle that her son represents.

“He is perfect,” she says. A breathing, laughing, beautiful piece of Marla’s heart.