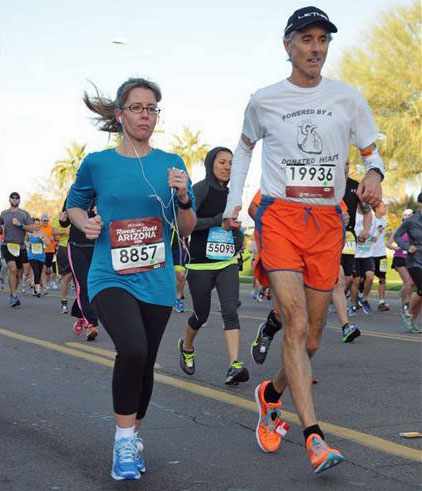 Mayo Clinic patient Don Salamone is proof that being in great shape before undergoing a heart transplant can enhance recovery. Even while tethered to a ventricular assist device that kept his heart functioning until the transplant surgery, he pushed himself to work out on a stationary bike for two hours daily and walked several miles on a treadmill.

While he could handily beat the competition in races before he received the implanted device, he couldn’t beat viral cardiomyopathy, which makes it harder for your heart to pump and deliver blood to the rest of your body, and can lead to heart failure.

Don underwent his heart transplant surgery in October 2012. True to his mission, he spent only eight days in the hospital following the surgery.

“I made a pledge to be in good shape before the surgery and to always honor my responsibility to my donor to take care of this heart,” Don says. As a result, within days of his surgery, he was up early, walking laps, training and eventually competing in numerous runs in Arizona and elsewhere.

This time, Linda Staley of Mayo Clinic’s Cardiovascular and Thoracic Surgery Division, and supervisor of the ventricular assist device coordinators, joined Don at the race. It was Staley’s first 10K, and she was delighted when Don suggested she run with him at the race. She also was well aware that he was no stranger to a 7-minute mile. Salamone, in turn, took his role as coach for Staley seriously. “Linda gave 110 percent effort and way exceeded what I thought she was capable of running,” he reports. “I pushed her right to the edge of her limits, and she held strong.”

Staley finished with her best time, shaving three minutes off her best practice time, and arriving at the finish line in 54 minutes, 39 seconds. “Don was amazing and pushed me to do my best, and gave me words of encouragement along the way,” she says.