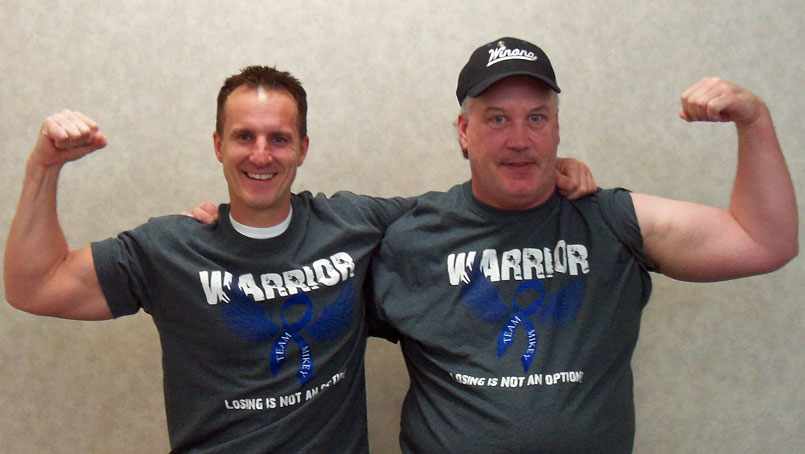 Mike Woellert had heard people talk about colonoscopies. He didn’t hesitate, and it may have saved his life.

Friday, March 27, marked the one-year anniversary of Michael Woellert’s colorectal cancer diagnosis. It’s a day he and his wife, Malissa, remember all too well.

“I was one of the last people to be called from the waiting room after Mike’s colonoscopy,” Malissa recalls. “I sensed something was wrong.” A nurse brought Malissa to Mike’s room, and the two of them, while viewing the ultrasound video in which a mass could clearly be seen, were told it was colorectal cancer.

The conversation was anything but clinical, however. “The doctor who had done the procedure, was tearing up while informing us of the results,” Malissa says. “I felt compassion all around me at that moment.”

Mike tried to lighten the mood with a joke. But Malissa says that even so, after hearing the diagnosis, she felt as if she had been kicked in the chest. She tried to contain her emotions, but felt the need to step out of the room momentarily to regain composure, knowing she wanted to return and provide support to Mike.

“As I stepped outside of the room, I started to break down. From all around me, people came to offer care and support. I felt a hand on my shoulder. Words can’t describe the amount of empathy I felt coming from the staff who were offering their assistance,” Malissa says.

So she went back into the room, and together, the couple faced what was in store for them in the coming months, which included chemotherapy, radiation, and surgery to remove a portion of Mike’s colon.

Mike’s surgeon was Eric Dozois, M.D., a consultant in Colon and Rectal Surgery at Mayo Clinic, who became a very special person to both Mike and Malissa. “He was very friendly,” Mike says. “Besides being an absolutely phenomenal surgeon,” Malissa adds, “we were impressed with how he treated us like family, not just another patient.  He exudes a warmth that has a trickle-down effect upon all the staff around him.”

Malissa, who is an appointment coordinator at Mayo Clinic, says that over the years, she has heard the positive experiences of other patients, but that she came to a new appreciation for the staff and what they do to make patients feel comfortable and well cared for. “It was a scary time, but they took the time to explain the procedures, to make sure Mike understood them, and then followed through every time,” she says. “They made us feel like we are all on the same team, fighting for Mike to pull through.”

After Mike’s diagnosis, it was initially difficult to talk about colorectal cancer. He and Malissa say it felt like a taboo subject – one that people don’t talk about as freely as they might with other cancers.

But through talking about it with the doctors, nurses and other staff, they say, the stigma was reduced and their comfort level increased.

Mike says he realizes that stigma, as well as the fact that people may be afraid to have a colonoscopy, may cause some to put off what could be a life-saving procedure. He and Malissa both encourage people to not let fear keep them from an important preventive measure.

“I had heard the stories from others who had gone through it,” Mike says. “But it’s not that bad, and it’s important to get checked before the disease progresses.”

Mayo Clinic is the social media partner for the Fight Colorectal Cancer community's #StrongArmSelfie campaign. The idea is to raise awareness of colon cancer prevention and screening by encouraging people to take a “selfie” with their best “strong arm” pose and then post it online using the hashtag. During March, colorectal cancer awareness month, Sharing Mayo Clinic will feature several patients participating in the campaign and sharing their stories. Mayo Clinic also released a music video to accompany the #StrongArmSelfie campaign.

Share Your Mayo Story. Are you interested in sharing your Mayo Clinic experience with others? If so, we'd love to hear from you. You can use this Web form to share your story yourself, or email us, and we’ll help you share your story.