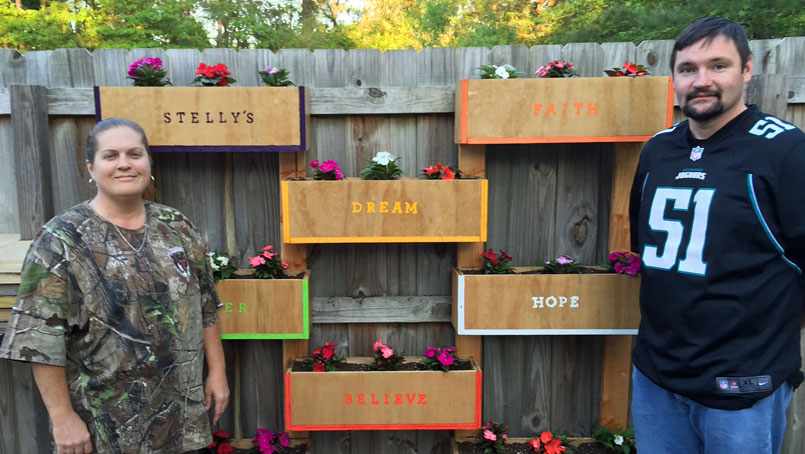 Receiving a donor kidney from an anonymous deceased donor is a gift of life to anyone in need of a transplant.  Receiving an organ donation from a living family member is extra special, when you consider the risks and sacrifices associated with making that choice.

Tammy Stelly, a 46-year-old retired postal worker from Middleburg, Florida, experienced that special gift when her brother-in-law was found to be a compatible match and became her living kidney donor.

“I was overwhelmed that he offered to be tested as a possible match,” says Tammy. “I never imagined that we might actually be a compatible match.”

Tammy isn’t the first member of her family to have kidney disease, nor was she the first to receive a kidney transplant from a living donor who also is a family member. One of her relatives received a kidney from his daughter many years ago, and lived another 17 years before passing away due to unrelated causes.

Tammy’s kidney problems began at age 9, when she was diagnosed with acute kidney failure her doctors believed resulted from a staph infection. As she grew older, her problem worsened, and she was eventually diagnosed with focal segmental glomerulosclerosis, a scarring disease of the kidney. Over time, her conditioned worsened to the point that about two years ago, she needed to go on dialysis three times a week. Tammy also started the process for being listed for a transplant but was told it could take up to five years to receive a donor organ.

“It was a very stressful time knowing that I was sick and likely would have a pretty long wait for a donor kidney,” says Tammy. “I experienced the full range of emotions and decided I needed to take some action on my own. I created a Facebook page to try and proactively find my own living donor but didn’t have any luck.”

That’s when her brother-in-law, Stephen Lowe, stepped up and offered one of his kidneys if he was found to be a good match.  A six-month testing and evaluation process followed. In November 2014, he learned he was a compatible match. Tammy’s transplant took place on Feb. 10, 2015, at Mayo Clinic’s Florida campus. Both Tammy and her brother-in-law have been doing well since the surgery.

“I’m feeling good, and my quality of life has significantly improved over what it was pre-transplant,” Tammy says. “The gift Stephen gave me was one of the greatest blessings you can give someone. I will be eternally grateful to him.”

Tammy has resumed some of her favorite activities, which include gardening and woodworking. She also loves to travel and plans to do so again now that she’s free from regular dialysis treatments. And going back to work or school may also be part of her future plans once she’s fully recovered. Her brother-in-law is back to work and resuming his normal life.

“While I initially came to Mayo Clinic for treatment because of its convenience to my home in the Jacksonville area, that truly became a secondary reason once I experienced the wonderful care I received here from everyone involved in my case,” she says. “I want to thank my doctors and the entire Mayo transplant team for helping me get through this process so that I can resume my life as normally as possible.”