Walking by Faith, and Now by Sight 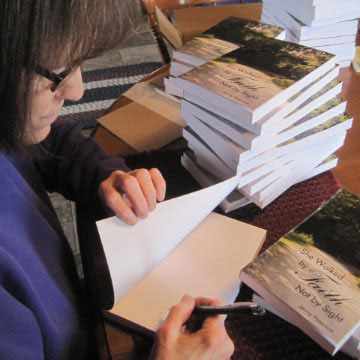 In many ways, Jenny Peterson was like other mothers of young children. She cooked and baked, cleaned and washed clothes, and cheered her children on from the sidelines of their activities. In one significant way, though, Jenny was different: She did all of these things without sight.

Jenny lost her vision in 1976, after having a severe reaction to antibiotics. "I developed toxic epidermal necrolysis, and lost 100 percent of my skin, my hair and fingernails," says Jenny, a resident of Vermillion, South Dakota. She was just 23 at the time. Her children, just 2 and 5.

The antibiotics were meant to treat a sore throat. But her reaction was life-threatening. It caused Jenny's skin and mucous membranes to blister and peel. It also caused scarring in both of her eyes. She walked out of the hospital after 96 days, alive but functionally blind. "I could see shapes and light, but that was about it," she says. "I could walk around my own home, but I couldn't drive. I couldn't read. I couldn't see my children clearly."

Though she'd lost a great deal, Jenny says also she gained something during her illness: faith and purpose. That purpose, as Jenny sees it, is to share her faith and spread hope. It's a feeling she knows something about, having remained hopeful for decades that her sight would return. "For years I would say, 'When I see again,'" says Jenny. There was no "if."

Waiting for a miracle

In the years after losing her vision, Jenny met with countless doctors. She had 14 surgeries, including two corneal transplants that temporarily restored her sight. "I got to see my kids again, and was able to see my grandson, Connor," she says.

But those glimpses were fleeting, as Jenny's body rejected both transplants after little more than a week, leaving her sightless again.

In 2009, Jenny learned she had melanoma in her left eye. The diagnosis would prove to be a blessing, as it led Jenny to Mayo Clinic, where a team of providers would work together to not only treat her cancer but also restore her sight.

During initial examinations to confirm the cancer diagnosis, doctors discovered Jenny had glaucoma in her right eye. When Keith Baratz, M.D., Ophthalmology, explained how he would treat the condition, he told Jenny he could also implant an artificial cornea, a procedure known as a keratoprosthesis or "KPro." That would give Jenny another shot at sight — but she wasn't sure she was ready to take it.

"I didn't want to go through another rejection," she says. Dr. Baratz encouraged her to reconsider, explaining recent improvements in treatment that made rejection much less common. Then, he left the decision where it belonged: in Jenny's hands.

"I went home and started praying," says Jenny. She also listened to Bible stories on tape. "The first story I heard was the parable of the blind man." Jenny felt that God was speaking to her through the story. "After hearing that, I called Dr. Baratz and told him I wanted to have the implant put in," she says.

On the day of surgery, ophthalmologist George Bartley, M.D., removed Jenny's cancerous left eye and replaced it with a prosthetic eye. Then, Dr. Baratz and Arthur Sit, M.D., a glaucoma specialist, began repairing her right eye. First, they removed scar tissue, then removed Jenny's damaged cornea. Next, they placed a valve to reduce the pressure that was causing her glaucoma. Finally, they removed a cataract and implanted the artificial cornea.

Dr. Baratz had told Jenny that it might take as long as 10 days to know whether the operation was a success. But the day after surgery, when Dr. Baratz removed the bandages from Jenny's eye, she discovered she wouldn't have to wait.

"I saw yellow stripes on his tie," says Jenny. "I was in tears. Then I saw his hand reaching out for mine. It was a miracle." 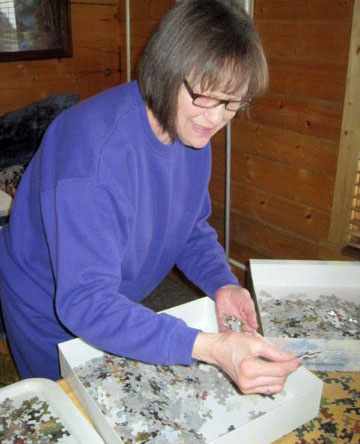 Since that day, Jenny has continued to see miracles. First among them: seeing her namesake granddaughter, Jenna, for the first time. She says watching Jenna and her grandson, Connor, grow up is a chance to see some of what she missed during her own children's youth.

Today, Jenny continues to rejoice in the ordinary beauty that was hidden from her for so many years: the vibrant yellow of an egg yolk, the soft green of new buds on trees.

"To see the buds coming on the trees, it's just amazing," she says. "I can see more than I ever dared hope for. They are working miracles at Mayo Clinic."

That's part of the message she wants to share with the world through a book she's written, "She Walked by Faith, Not by Sight," and through speaking engagements.

"I tell everyone who has something wrong with their health, if they aren't getting an answer, go to Mayo," she says. "If there's a fix, Mayo will find it."

And they'll do so with kindness and compassion, she says. "The people at Mayo put themselves in their patients' shoes," Jenny says. "Their hearts are involved with their patients. My doctors really wanted me to have sight. I think they are like that with all their patients. They do the best they can for everyone."

Jenny continues to return to Mayo Clinic for checkups every three to four months, and will need to have her implant replaced every three to five years. With so many appointments, she says she and her care team are now "like family."

"We usually leave each other smiling," she says. And that's another sight she loves to see.

You can learn more about Jenny's story by visiting her website, shewalkedbyfaith.com.