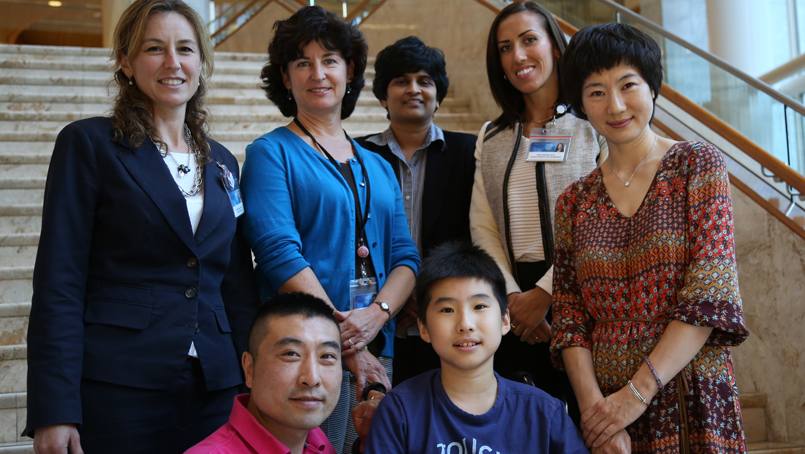 He melts hearts with his infectious smile, cheerful attitude and frequent magic tricks.

But the slogan on Haonan Jiang's T-shirt, which reads "Tough as Nails," is a more accurate summation of his spirit, and the fight he and his family have been waging.

The 11-year-old from Beijing, China, prefers to be called "Jack." He is suffering from what is known as an anaplastic astrocytoma, a grade 3 malignant tumor, according to his doctors at Mayo Clinic. The typical survival rate after diagnosis is one to three years.

Jack's parents, Ben and Lili Jiang, had promised him a trip to see America when he finished primary school. But instead of sightseeing, their focus is now on Jack and doing anything possible to stop, or at least slow, his deteriorating and deadly condition.

Very little pain, and a sign of things to come

The first hint of trouble came last February. After a shower, Jack told his father that his right leg felt the heat from the shower differently from the left one. If Jack turned the water very hot, he didn't feel any pain in his right leg. He also noted that if he squeezed his leg, there was very little sensation.

By March, Jack's left leg began to lose strength. Then he lost the ability to feel both legs. He had to work hard to walk, had a halting gait, and used his hands to lift his legs to climb stairs. "A thought flashed in my mind, something is not okay with my son," says Ben.

Shortly thereafter, Jack was admitted to a Beijing children's hospital. He received three MRI scans over the span of a week, but the doctors told them there wasn't much they could do. "It really hurt our hearts, but we didn't give up," says Ben. With the help of friends, he had Jack seen at five other top hospitals in Beijing.

Based on the MRI scans, doctors said they believed that Jack needed surgery for a cancerous tumor on his spine. He was still able to walk on his own, so doctors advised against what would be a risky procedure.

"It was very heartbreaking, and as a parent I could not accept that," says Ben. "My son played all sports, excelled in school, I needed to do everything I could to give my son another chance."

Friends in America willing to help

Jack's parents asked their doctor about options abroad, but he wasn't hopeful. They weren't sure what to do next. Then Ben read a story on the Internet about a man with an illness similar to Jack's who traveled from China to America for a successful treatment. When Ben learned that the man had been misdiagnosed, it gave him hope. 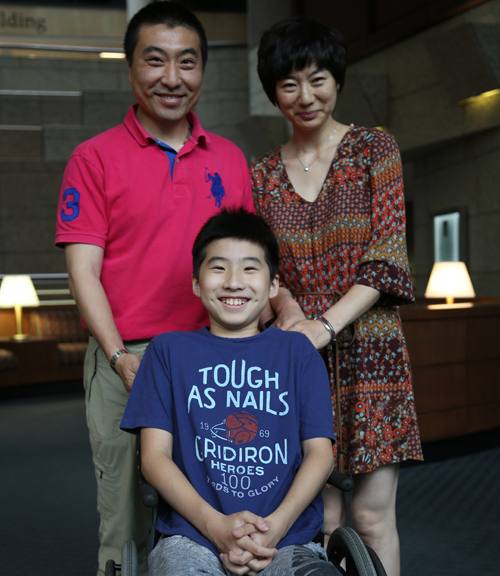 The family had no friends to help them in the U.S. But they had recently vacationed on Mauritius, a small island off the Coast of Africa in the Indian Ocean, where they met a Chinese woman from America, and Lili had saved her phone number. They called and asked the woman about possible friends in the Boston area. She couldn't help there, but she mentioned that she lives in Rochester, Minnesota, close to Mayo Clinic.

"I didn't know anyone in America, yet I met someone who lived near Mayo Clinic. It's like God arranged everything," says Ben. "I told my wife this is a sign of what we're going to do."

Thanks to Ben's travel promise to Jack, the process of securing a travel visa was already underway. They bought tickets for a flight to the U.S. the day after their travel visa arrived.

After arriving in Rochester in May, the family went to church with their friend. There they met new friends who listened to the family's story and made sure that Jack's case came to the attention of Mayo Clinic doctors.

He was admitted to Mayo Clinic Children's Center, and after a biopsy of his spinal cord tumor was performed in late May, he was given the diagnosis of anaplastic astrocytoma.

Jack's case is unusual in at least a few respects according to Nadia Laack, M.D., a pediatric radiation oncologist at Mayo Clinic. "They are rare tumors to begin with," says Dr. Laack. And when they are found, she says, "95 percent of them are found in the brain."

The location of the tumor left the medical team with few options.

Jack's family and his doctors were not ready to give up, however. Ben recalls his social worker asking them why they had come to America. "Hope," he answered. "If there is one country that can heal my son, it's America."

Rallying around the patient and family

Jack's doctors thought he might benefit from radiation therapy. They wanted to slow down the rate of neurologic deterioration due to the progression of the tumor and improve the quality of his life.

By the time he was admitted to the Inpatient Rehabilitation Unit on the Saint Marys campus, Jack had lost the ability to use the lower half of his body. His father was carrying him to and from bed, so he could go to the bathroom, bathe and eat.

While Jack was receiving therapy on the rehabilitation unit, nurses gathered donated supplies for Jack's family, and his physical therapist was able to get him a wheelchair. With no insurance, no funds other than personal savings, and the family's decision to put their home up for sale, Jack's team ensured he got the care he needed.

"The needs of the patient come first," says Julia Iafrate, D.O., a resident in Physical Medicine and Rehabilitation. "So we made it happen. A number of providers acted together to make Jack's needs come first."

"The way the team brought their expertise and compassion to advocate for Jack just made me proud and grateful to work at Mayo," says Sherilyn Driscoll, M.D., pediatric medical director, Mayo Clinic Physical Medicine and Rehabilitation. "His team helped make the difference between a sick boy lying in bed and an independent boy joyfully participating in life around him."

Jack was able to join his family at the Ronald McDonald House in mid-June.

Progress, precious time and a superhero

Doctors designed a four-week course of radiation therapy specifically for Jack, so he could be well enough to return home to China by in August.

"We had very limited options. The goal is really to have tumor control, not a cure. That's the nature of the disease," says Mayo Clinic Pediatric Oncologist Amulya NageswaraRao, M.B.B.S.

"We're buying time, only months really," adds Dr. Iafrate. "But for an 11-year old child, that has all the meaning in the world for his family. That's why we rallied so hard – to get him a few good months before he further declines."

Ben was touched by the extraordinary effort. "From the doctors to the nurses, everyone treats my son and my family as a human being," he says. "It makes me cry. It makes me cry a lot."

When Jack first arrived in Rochester, he told his therapists his goal was to be able to walk to school again. He still needs his wheelchair, but since starting radiation treatments that are shrinking his tumor, some movement is returning to his right side, and he can move his leg.

Steroids have helped his appetite to return and he is slowly gaining weight. Jack says he loves his mother's cooking. And French fries.

Along with video games, Jack is a big fan of Hollywood action movies and wants to be an actor. Hugh Jackman and Chris Evans are on his shortlist to meet. Thanks to the generosity of a Mayo Clinic patient, Jack got his wish.

Jack and his family were to fly to Berlin on their way home to China in mid-August. During a stop there, they visited a film production set and met actor Chris Evans, who plays Captain America. The crew was finishing up the final scenes for the next Marvel Comics movie.

"Awesome," is how Jack summed up the news when he learned that he would meet one of his heroes.

It's clear Jack and his family are heroes to his care team who are impressed by their "do everything, do anything" attitude to overcome financial, distance and language barriers.

"When someone feels they trust you, and you are their best hope, it's hard not to be moved by that," says Dr. Laack. Dr. Iafrate adds, "I don't have children yet, but if and when I do, I want a 'Jack.' This child will be in my thoughts forever."

Dr. Iafrate recently chatted with Ben, and told him, "Your family has touched the hearts of many people here. We love Jack. Thank you for being part of our lives."

The feeling is mutual.

"No one would understand how lucky I feel for my son," says Ben. "The doctors at Mayo Clinic are really angels whom God sent down to earth. Everyone helps the patients, thinking of many things that we didn't think of as parents, and they are very happy to do so. That's really amazing! I wish every doctor could be like Mayo's one day in China."