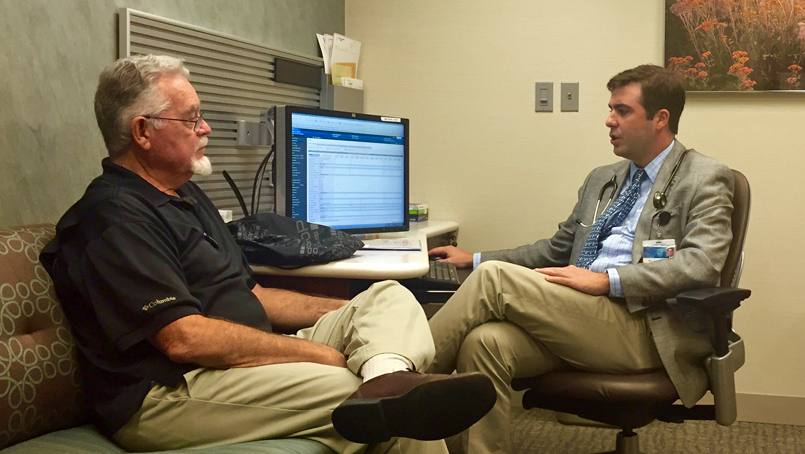 A diagnosis of stage IV melanoma can be a frightening prospect, with surgery and chemotherapy often an integral part of the treatment regimen. But Frank Moseley, a Jacksonville, Florida, native with an advanced melanoma diagnosis, was eager to do whatever it takes, even going beyond the norm, to give him the best chance of recovery.

So when Frank agreed to become the first participant in a clinical trial at Mayo Clinic's Florida campus and be injected with a form of the herpes virus to treat his melanoma, it was no surprise that he was confident it would work.

Frank had retired after a 41-year career at Publix and was a busy grandparent – with 10 grandkids – when his wife first noticed a suspicious mole on his back in 2011. He had the mole checked by his dermatologist, and a biopsy confirmed melanoma, which led to him undergo surgery a week later.

Unfortunately, that wasn’t the end of Frank’s experience with melanoma. In February 2012, he felt a swollen lymph node in his neck, and his dermatologist sent him to Mayo Clinic for further testing and diagnosis. At Mayo, Frank learned that his melanoma had spread to his lungs and liver, that further surgery would not be useful, and that chemotherapy was the standard treatment at this point.

After being referred to Richard Joseph, M.D., a Mayo Clinic oncologist and melanoma specialist, Frank was told he’d be a good candidate for a clinical trial testing the effectiveness of the oncolytic herpes virus in treating metastatic melanoma.

“Dr. Joseph told me he was involved in a clinical trial testing virus therapy and thought I’d be a great candidate for it, since my tumors were small. So I said why not,” says Frank. “I had no hesitation at all to test this new virus therapy as a treatment option for my melanoma.”

The idea behind the phase II trial is that the virus will attack the melanoma cancer cells, which in turn would wake up the body’s own immune system as well, according to Dr. Joseph. “It has shown some success so far in reducing tumor size, so I offered it to Frank as another treatment option besides the standard chemotherapy regimen,” he says. “He agreed to become the first person here at Mayo Clinic in Florida to participate in the study.”

Frank’s first injection occurred on April 2, 2015. The treatment regimen included injections into the tumor site over a 12-week period. The results from Frank’s initial MRI scan after 12 weeks of treatment showed no change. Another 12-week round of treatments was ordered, and his second MRI scan suggested that the growth of his tumors had slowed down, and his condition had stabilized.

“We are taking small steps and continuing Frank’s virus therapy treatment with the hope that his tumors will eventually start to shrink,” says Dr. Joseph. “I’m optimistic that the addition of this therapy to his treatment regimen can be helpful in managing his disease.”

What does Frank think about his participation in the trial so far?

“Participating in the trial not only is enhancing my treatment, but has opened the doors for other melanoma patients to participate in this wonderful opportunity,” says Frank. “Mayo Clinic is an awesome place, and I’m lucky to be a part of some of the latest cancer research and treatments available.”