Putting the Pieces Together to Solve Medical Mystery 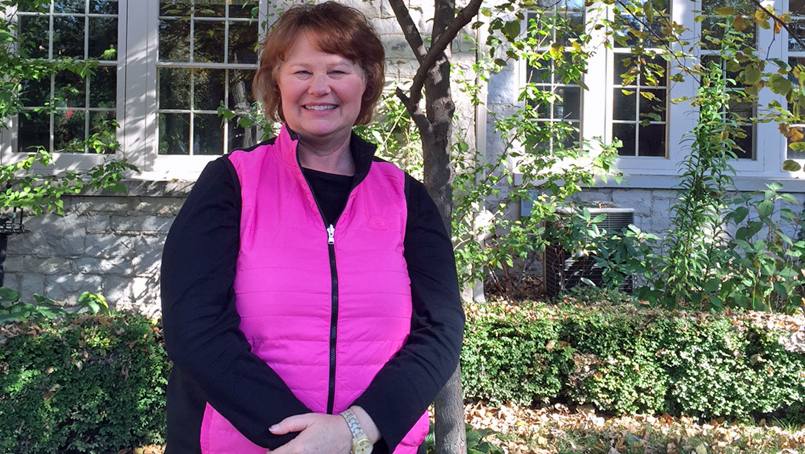 Kim Goranson knew something wasn't right. For more than 10 years, she endured exhaustion, pain and bouts of confusion. But to her frustration, repeated medical evaluations revealed nothing. A high-energy real estate agent in Lincoln, Nebraska, Kim saw her successful career slip away as the symptoms took a heavy toll on her life.

Her outlook began to change, however, when Kim was referred to Mayo Clinic in Rochester, Minnesota. Although it took some time to arrive at a clear diagnosis, her Mayo Clinic care team was able to put the pieces of the puzzle together and determined that Kim had lupus.

Lupus is a chronic inflammatory disease that happens when the body's immune system attacks its own tissues and organs. Lupus is often difficult to diagnose because the inflammation it causes can affect many body systems — including the joints, skin, kidneys, blood cells, brain, heart and lungs. As in Kim's situation, symptoms are often vague, and they tend to mimic other medical conditions.

"Lupus is a rare disease, but what's worse is it's a disease of one," says Kim. "We are all so dramatically different. That makes it hard to recognize."

"After 12 years of trying to explain to so many doctors all my vague, odd symptoms, Dr. Chowdhary was the first one ever who looked at me as if she understood." - Kim Goranson

When Kim came to Mayo Clinic in 2012, doctors first suspected she had fibromyalgia. But the symptoms didn't quite fit. She was evaluated by specialists in Neurology, Sleep Medicine and Rheumatology. Her rheumatologist, Vaidehi Chowdhary, M.D., reviewed Kim's medical history, assessed her symptoms, conducted a physical exam and, based on that evaluation, ordered several specific tests. From her analysis, she determined Kim's lupus diagnosis.

"After 12 years of trying to explain to so many doctors all my vague, odd symptoms, Dr. Chowdhary was the first one ever who looked at me as if she understood," says Kim. "I almost wept when she told me I had lupus. It was such a relief. Until I was properly diagnosed, there was no way I was going to get better."

Although there's currently no cure for lupus, Kim was able to begin rebuilding her life after she learned she had the disease. Dr. Chowdhary helped Kim create a treatment plan that included regular follow-up visits to Mayo Clinic. She also worked with pain management specialists, physical therapists, a dietitian and an acupuncturist to find ways to successfully manage Kim's symptoms.

Those steps made a big difference. With treatment, Kim was no longer confined to bed. Her pain lessened substantially, her energy increased, and her thinking became clearer.

"Dr. Chowdhary told me progress would be slow, and it has been. But I'm learning how to deal with the disease. I'm on a trajectory toward health and wellness," says Kim. "I used to be very frightened. Now I have a peace of mind that just wasn't possible before I received care at Mayo Clinic."

When she returned home after her diagnosis, Kim found a lupus support group that met at her church. She eagerly joined and grew close to the other members. As they shared their stories, Kim was puzzled by some of the experiences several of her new friends recounted.

"The others would talk about their treatment, and even though I don't know anything about the medical world — I sold real estate — I recognized that what they were saying was not consistent with what I was told at Mayo Clinic," says Kim. "Several of them were hospitalized, and I'd go visit. I'd ask questions, and it really seemed like they just weren't getting the help they needed."

"I have to focus on what I can do. I could drive my friends to Mayo Clinic, so I did. It helped them, and it helped me ... My life has been blessed through these experiences."

Kim helped two members of the support group get appointments at Mayo Clinic for evaluation to explore other treatment possibilities. She arranged to make the six-hour drive from Lincoln to Rochester with them and coordinated lodging while they were there.

"I'm only 55 years old, and there's so much I can't do," says Kim. "But I refuse to focus on that. I have to focus on what I can do. I could drive my friends to Mayo Clinic, so I did. It helped them, and it helped me. I learned a lot. My life has been blessed through these experiences."

As she reflects on the care she and the others received at Mayo Clinic, Kim believes its value cannot be underestimated.

"This disease is treatable, but it is very, very complicated. You have to have someone who knows it, understands it, and has experience with lupus," says Kim. "Mayo Clinic is one of the only places really well-suited to handle it. The bottom line is that Mayo Clinic saved my life and saved my friends' lives, too."

I have very similar problems. I’m desperate and need to be seen by people who really care please contact me or set an appointment.

You might also consider looking into our Mayo Clinic Connect website (http://connect.mayoclinic.org), where you can communicate with other patients who may have had similar experiences.

My uncle, moms brother, had lupus and, I think, what my grandma told me, that her mom had lupus too. I have some symptoms, but I never thought about that, just kept going. Can it be in genes? Should I go do some tests or just don’t mind? I’m sure I can put my money somewhere else…