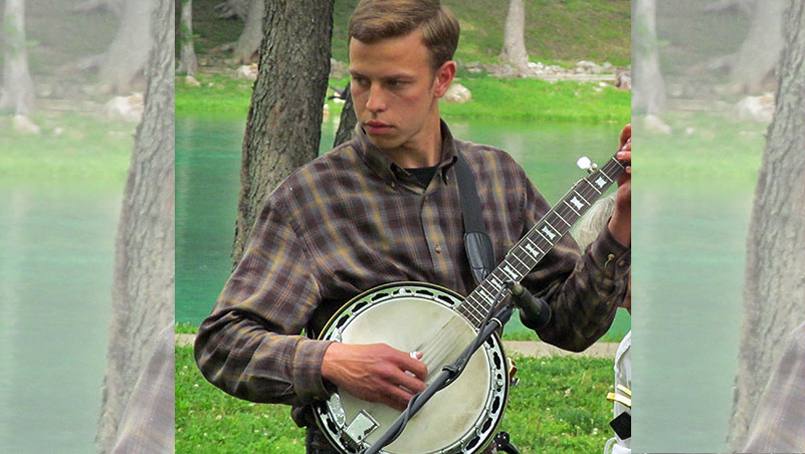 Marilyn and David Weissing, both Mayo Clinic employees, knew something was wrong when their 19-year-old son, Karl, asked to be taken to the hospital one summer evening in 2014. Karl, always healthy and active, rarely complained about anything. So David immediately drove him to the Emergency Department at Mayo Clinic’s Rochester campus.

Karl, a beekeeper, was the third of eight children raised on a hobby farm in Winona County, Minnesota.  Karl developed an interest in sustainable farming as a young child and had worked with several local farmers to expand his knowledge and expertise.

He spent the winter after his high school graduation managing an organic dairy herd in Missouri. By the following July, he was back home working a construction job, making a movie with some friends, and playing in a bluegrass band with his brothers.

Karl was initially diagnosed with atypical hepatitis A, possibly acquired a few months earlier during an outbreak at a restaurant. When his liver started to fail, Karl was put on the liver transplant list and, miraculously, received a new liver before a month had passed.

Only a week after the transplant, however, Karl received an even more difficult diagnosis. He learned that he had histiocytic sarcoma, a rare form of cancer – so rare, in fact that there are no diagnostic tests or established treatment protocols available. His care team reached out to doctors all over the country to determine how best to respond, and he began chemotherapy within a few days.

Respect for the mind-body connection, exemplified in the Integrative Medicine and Health program, his family says, was crucial to Karl’s ability to cope with his illness.

For this quiet and reserved young man, the hospital was a difficult place, his family says. The progression of his illness and the interruptions of his around-the-clock care left Karl unnerved and yearning for some way to regroup.

When Karl heard about Mayo Clinic’s Complementary and Integrative Medicine department, he inquired about the massage therapy program. He learned that acupressure is a therapy that supports the body’s natural ability to heal and manage stress.

In search of some relief, he asked massage therapist Liza Dion to begin working with him. Over the next few months as she performed acupressure, they formed a close bond. During treatment sessions, she focused on creating a safe space where Karl could be himself and have support to deal with being sick and living in the hospital.

They usually played some type of soothing music – chant and cello music were among Karl's favorites – during his therapy. He almost always emerged with an improved outlook and a renewed fortitude for facing the next challenge, his family says.

Karl overcame numerous obstacles during his almost 90-day hospitalization. Throughout, he and his family were grateful for the outpouring of care and support he received from Mayo Clinic staff. But having access to Dion's services gave him an unexpected reprieve from the demanding medical routines that occupied most of his days.

Respect for the mind-body connection, exemplified in the Integrative Medicine and Health program, his family says, was crucial to Karl’s ability to cope with his illness.

“Karl was in good hands with Liza,” says his mom, Marilyn. “She helped him maintain a sense of peace and dignity.”

Karl passed away quietly on Oct. 7, 2014, as a result of complications from his cancer. “Karl accepted everything so bravely,” his mom recalls, “but he fought to carry on with everything that he had. Acupressure was one of the best resources available to him throughout his illness.”

That was clear to his care team, too.

“Karl was an amazing person. He was really a lovely soul,” says Dion. “When I did acupressure with him, we really connected. I remember one time, he opened his eyes and said, ‘If I get through this, I am going into integrative medicine.’ I loved that the work brought renewed energy and forward thinking to him. It was wonderful to help him find such peace and relief.”