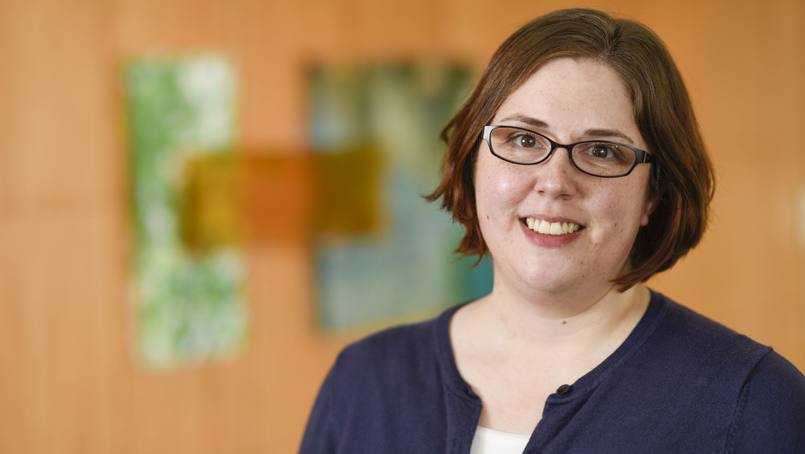 Andrea Liptac describes her journey to Mayo Clinic as a "winding road."

She first learned about Mayo in the early 1990s, when she was living in Montana with her family. At that time, her mother, Kelli Liptac, was diagnosed with idiopathic dilated cardiomyopathy and congestive heart failure, and was referred to a specialist at Mayo Clinic's Rochester campus. Her chronic conditions would warrant multiple trips to Rochester over the years. She would ultimately land on the heart transplant list.

As Andrea approached college graduation in 2004 and began to consider where to apply her education as a laboratory technologist, she recalled her mother's visits to Rochester.

"My mom's treatment at Mayo Clinic indirectly influenced my decision to work here," Andrea recalls. She applied to work as a laboratory technician in the Protein Immunology Laboratory at Mayo and has remained in that role ever since.

Unfortunately, Andrea's Mayo Clinic experience went beyond her employment. She would learn she and her mother shared more in common than she knew, leading her on a  a surprising and difficult journey she says gave her a different perspective on Mayo Clinic and a new understanding of the patient experience.

In 2014, Andrea visited her primary care provider after experiencing months of labored breathing. "Initially, they thought it was the tail end of a pneumonia infection," Andrea says. "But after a few days, it got worse." Her doctor ordered a chest X-ray. Results indicated that Andrea's heart was enlarged, and she had fluid in her lungs.

Doctors immediately sent her to the Emergency Department for an echocardiogram.

Based on review of Andrea's family history, symptoms and a chest X-ray, Emergency Department doctors suspected that Andrea, like her mother, might have dilated cardiomyopathy and congestive heart failure.

"The doctor who shared the news with me was kind and supportive. But more importantly to me, she took the time to share her own personal story." - Andrea Liptac

"The doctor who shared the news with me was kind and supportive," Andrea recalls. "But more importantly to me, she took the time to share her own personal story. She, too, has a cardiac condition but told me how she won't let it limit her life."

Having understanding doctors and nurses who helped ease Andrea's anxiety made the ultimate diagnosis – that she did indeed have the same diseases as her mother – easier to digest.

Still, Andrea was surprised. "It turns out dilated cardiomyopathy can be inherited," Andrea explains. "This was new information to me. When my mother was diagnosed in the '90s, we were told it was not hereditary." Andrea later learned that her maternal grandfather also had congestive heart failure but was not diagnosed until late in life.

When Andrea received her diagnoses, she was living alone in Rochester. "Aside from a few friends from work, I was going through this by myself," she says. "All of my family is out west in Montana."

Enter the staff of Mayo Clinic who – in Andrea's eyes – became her family during the experience.

"Those nurses were like superheroes," she says. They ensured that Andrea was educating herself on her condition, regularly bringing her printed literature, streaming on-demand videos, and having candid conversations about her concerns. They also were attentive to her medications, vital signs, and abnormal alarms.

"I knew each of them was taking time to become familiar with my case," Andrea says, "because I was never asked the same question twice."

When she was initially discharged, Andrea says her caregivers ensured that she was prepared and on board with her plan for aftercare and follow-up. She recalls her discharge packet being a major factor in helping to alleviate some of her stress. The packet included her lab and test results, final diagnosis, and plan for returning home.

The medication schedule was especially useful to her.

"Cardiac conditions come with a lot of prescriptions," Andrea says, "and both the nurses and the physician's assistants made sure I was familiar with every page of that packet." Andrea was prescribed 12 to 15 pills each morning. "I used to take only a multivitamin," she jokes. "Not anymore."

Andrea's aftercare plan included a visit to the heart failure clinic and a transplant evaluation, where she was introduced to cardiologist Barry Boilson, M.D.

"Andrea had very advanced cardiomyopathy when she first presented to us," Dr. Boilson says. "Her heart function did not improve with usual medical therapy."

In time, Andrea began to struggle with worsening heart failure.

"We knew that ultimately a heart transplant would give her the best long term survival and quality of life," Dr. Boilson says, "but her blood type would mean a long wait to transplant."

"I can't say enough good things about Dr. Boilson. Anytime I had a problem, he would fit me into his schedule that same day. I truly felt like I was his only patient." - Andrea Liptac

Because of that, Dr. Boilson recommended that Andrea consider a left ventricular assistive device, or LVAD, implantation. "An LVAD can assist with and replace some of the heart's function," he says. "It provides improved blood flow to a patient's vital organs so they can stay well and active while they wait for transplant."

While Andrea valued Dr. Boilson's expertise, she was hesitant to get the device implanted. "Watching my mom's recovery from her implant showed me just how hard that lifestyle is," Andrea says. "But Dr. Boilson saw that the LVAD was my best option and ultimately, getting it was probably the smartest thing I've done for my health since being diagnosed."

Andrea describes her experience working with Dr. Boilson as nothing short of amazing. "I can't say enough good things about Dr. Boilson," Andrea says. "Anytime I had a problem, he would fit me into his schedule that same day. I truly felt like I was his only patient."

"Our experiences have been eerily similar," Andrea says. "We were both diagnosed in our early 30s because of difficulty breathing. The progression of heart failure has been much faster in me than in my mom." Andrea's mother had been stable on a prescription regimen for 10 to 15 years before deteriorating enough to be listed for a heart transplant.

Andrea reports they are both doing well and that through it all, both have maintained a sense of humor.

New perspective for her work

Andrea's self-described "winding road" to Mayo Clinic has given her a dual perspective as both employee and patient. And though Andrea the patient is still recovering, Andrea the employee is eager to return to work.

"I believe being a patient has helped me become a better employee," she says. "I can now empathize with the tired or cranky patient who does not want one more needle pointed in her direction."

And, minus the heart disease, "being a patient here at Mayo Clinic has been absolutely amazing," she says. "The staff here recognizes that we are not just problems to be solved, or bodies to be fixed. We are real people who need healing."