Back in the Symphony After Surgery to Remove Brain Tumor 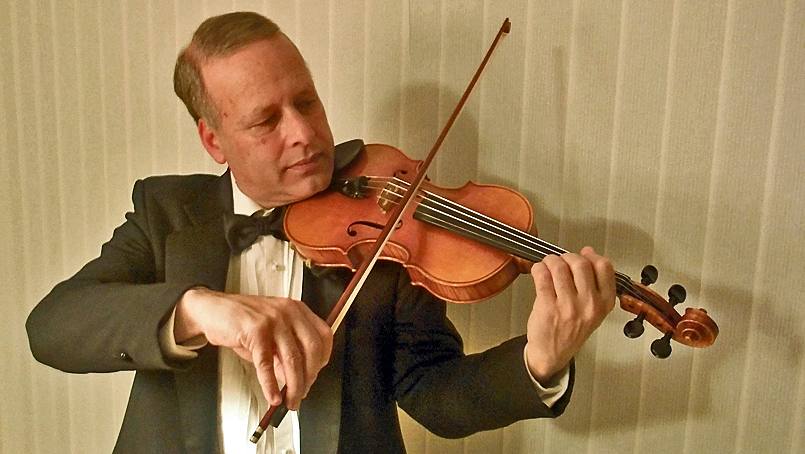 Stewart Rosen was beyond anxious when he learned he had a tumor the size of a walnut by his right ear. The tumor was benign. But Stewart, an accountant by day and violinist by night, worried that removing the tumor, an acoustic neuroma, might affect his ability to play music.

"I'd never had any kind of surgery or hospitalization before," he says. And with the surgery he'd need to remove this tumor, Stewart knew that he'd lose hearing in his right ear. That wasn't all. "I was afraid a facial nerve might become paralyzed or my vision would be affected," he says.

Stewart noticed a change in his hearing in his right ear, and a friend had recommended he see an ENT (ear, nose and throat) specialist. That doctor detected a major difference in hearing between Stewart's ears and ordered an MRI to rule out a brain tumor. Unfortunately, the MRI pointed to an acoustic neuroma.

Acoustic neuromas are noncancerous, usually slow-growing tumors that develop on the main nerve leading from the inner ear to the brain. Branches of this nerve affect balance and hearing.

"They recommended a translabyrinthine craniotomy to preserve my facial muscle," Stewart says. "I felt comfortable with their recommendation because it was Mayo Clinic. I just know what Mayo stands for. It didn't occur to me to have surgery somewhere else."

"I felt comfortable with their recommendation because it was Mayo Clinic. I just know what Mayo stands for. It didn't occur to me to have surgery somewhere else." - Stewart Rosen

Much to Stewart's surprise, his Mayo Clinic doctors told him they'd had a cancellation and could perform his surgery the next day.

"I was so anxious that I just wanted to get it over with," he says.

The surgery lasted 11 hours. The surgeon made an incision behind Stewart's right ear, and removed bone and the tumor.

"The first thing I remember was hearing my wife say they got the whole tumor and that my facial nerve was OK," Stewart says. He spent several nights in the hospital and then returned home to recover.

Stewart says the recovery was easy, and he returned to work after five weeks. Six weeks later, he was back to rehearsals for the Minnetonka Symphony Orchestra.

"My brain had to be retrained to adjust to the change in hearing," he says. "At first, I couldn't always tell where sounds came from. Ultimately, I think my violin playing might have improved, because I have to pay more attention to sounds. That's a nice silver lining after a 25-year career in a volunteer symphony."

Stewart continues to be checked to make sure his acoustic neuroma doesn't recur – a very slight possibility. He recently returned to Mayo for a two-year MRI scan, which was clear.

"I recorded Beethoven sonatas after my surgery and gave my Mayo Clinic doctors a CD at that appointment," he says. "Everything at Mayo was amazing just like I thought it would be."

Stewart wants others with acoustic neuromas to know how treatable they are.

"If you are diagnosed and then read about them on the Internet, you might be really scared," he says. "Most of the stories seem to be extreme cases. I wish I'd found stories like mine. You can lead a pretty normal life with single-sided deafness. The worst part of my experience was the anxiety between diagnosis and surgery."

Yes. I had an Acoustic Neuroma removed in 1993. My Love for music was and will be forever unchannged. MRI’s, and tests reveals, Alzeheimer’s Dementia, Frontal Lobe Degeneration, Parkinson’s Disease. Muscular Diseases. I have had extensive tests and Medical Records at the NIH Institute in Bethesda, Maryland. Release forms have been signed but no certain specific, Trial. Could you please help me with information on Genome Therapy. Many issues, cause discomfort to my body all over, from time to time. I have trouble with my Brain Neurotransmitters and need to address these issues soon. Would you please e-mail me or send me some information because I need to get this started before other developments arise. Thank you for being here and helping those who need to get well or try fighting Rare Diseases.