A New Weapon in the Arsenal for Patient With Stubborn Cancer: Proton Beam Therapy 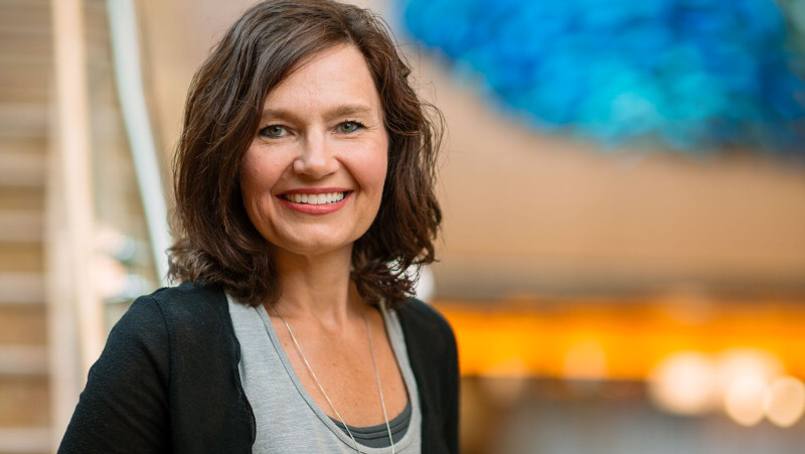 Audra Popp has a rare tumor – anaplastic pleomorphic xanthoastrocytoma, also known as anaplastic PXA. Only a handful of people are diagnosed with this condition each year. Audra is the first person at Mayo Clinic with anaplastic PXA to be treated with proton beam therapy.

But proton beam therapy is just the latest step in the battle against Audra's tumor. She's had five craniotomies since 2001, and she has a scar from her right ear to the crown of her head as evidence. She had surgeries at Mayo in 2007, 2009, 2014 and 2015. She also has had three regimens of chemotherapy through the years and six weeks of radiation therapy at Mayo Clinic in 2007.

The tumor has become more aggressive. And each time her surgeons think they have it completely removed, it comes back.

After Audra's fourth surgery, her surgeon initially suggested radiation therapy, but that wasn't in the cards. "The radiation oncology team at Mayo Clinic felt it was too risky and possibly too damaging, given that I'd had radiation therapy seven years before," Audra says.

"Mayo has let me be an active participant in my treatment plan, which gives me confidence. I'm in the best hands I can be." - Audra Popp

"We don't take the decision to re-irradiate lightly," says Nadia Laack, M.D., Audra's radiation oncologist at Mayo Clinic. "Brain that has previously been exposed to radiation is more sensitive to injury from a second course of radiation." And Audra's tumor is adjacent to an area of the brain that's important for left motor function.

"Proton beam therapy is much more targeted than traditional radiation therapy and gives us more options for tumors in sensitive areas and in situations where minimizing radiation dose to adjacent tissue is critical," says Dr. Laack. "We feel this is the best choice for aggressive, recurrent tumors like Audra's that have limited treatment options."

Although Audra's tumor may recur, she is confident her Mayo Clinic doctors have her back.

"They're always looking for the best option for the next possible recurrence," she says. "A decade ago, Dr. (Jan) Buckner. assured me that huge advances were occurring and new treatments would come out in five to 10 years. He was right, and there are new diagnostic tools and treatments such as proton beam therapy. I've always been and continue to remain hopeful. I feel extremely lucky and blessed to have the team I have."

Dr. Buckner says a genetic alteration in the tumor that was removed in Audra's last surgery showed a mutation that makes the tumor cells more vulnerable to a new drug combination. "If she needs more treatment in the future, we already have a plan in place," he says.

Audra says she is grateful to have Mayo Clinic in her "backyard."

A registered nurse, Audra lives in Royalton, Minnesota – a three-hour drive from Rochester. "In one day, I can drive to Mayo Clinic, have my tests done, see my doctor for my results and treatment plan, and be home by evening," she says.

Audra had proton beam therapy in the summer – her favorite season – and took full advantage of her time in Rochester. She explored the area with tours of Mayo Clinic's historical homes and buildings, a walking food and history tour, a trolley tour and concerts by the river. She also took advantage of classes offered at the Mayo Clinic Cancer Education Center, including tai chi, Reiki, nutrition, meditation and stress management.

"I feel like I'm going to college – living in a dorm-like setting (Hope Lodge, temporary lodging for patients being treated for cancer), educating myself, exploring a new area. And my proton beam treatments are like going to class," she says.

"Mayo has let me be an active participant in my treatment plan, which gives me confidence," Audra says. "I'm in the best hands I can be. I've met so many wonderful individuals along the way and learned so much. It hasn't been the easiest path, but I am surrounded by caring, supportive people."