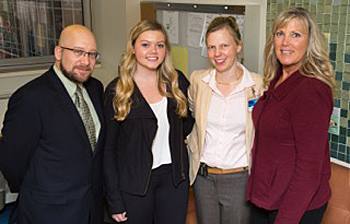 Camden Christopherson is an athlete: volleyball, basketball, softball, cross-country. She does them all. So when doctors told her, at age 13, that she had to wear a brace for 22 hours a day to combat scoliosis, and surgery to fuse her spine was likely in her future, Camden was devastated.

These treatments could help correct the severe spinal curve that had developed quickly during a growth spurt, her doctors said. But Camden didn't want to give up her flexibility and freedom of movement. And her mother, Teresa Christopherson, wasn't ready to accept that a brace and fusion surgery were her daughter's only choices.

"I wanted a second opinion," Teresa says. "I wasn't going to go forward based on one recommendation, so we went to Mayo."

At Mayo Clinic's campus in Rochester, Minnesota, mother and daughter met A. Noelle Larson, M.D., an orthopedic surgeon, who discussed another possibility with them: anterior vertebral body tethering, or VBT, a new surgery for scoliosis that doesn't involve fusing vertebrae together. It was just the answer they needed.

The Christophersons learned about Camden's condition shortly after a family move put her in a different school district. A visit to the school nurse was part of Camden's new-student orientation. The nurse checked Camden's spine and found a significant S-shaped curve. The finding was surprising, because a year earlier, an exam showed no signs of spine problems.

An evaluation with local doctors found a 45-degree spinal curve. Camden's condition was classified as severe scoliosis. She was fitted for a brace, but due to the severity of her condition, her doctors were concerned it wouldn't be enough to correct the problem.

"I couldn't imagine my daughter's life with two steel rods in her back. She was only 13." - Teresa Christopherson

The only other alternative they could offer was spinal fusion surgery. This procedure corrects the curve of the spine by connecting two or more of the spinal vertebrae. Metal screws and rods typically are used to hold the vertebrae together, so they can heal into one solid unit.

"At that point, I couldn't imagine my daughter's life with two steel rods in her back. She was only 13," Teresa says. "If that was her only option for having a pain-free life, fine. We'd do it, of course. But we had to look for other options first."

When the Christophersons met with Dr. Larson at Mayo Clinic, they discussed a variety of possibilities, including the VBT procedure.

The surgery involves inserting screws into the vertebrae affected by scoliosis. The surgeon attaches a cord to each of the screws and then pulls and secures the cord, so the vertebrae are cinched together on one side and splayed open on the other, correcting the curve. This aligns the spine and gives the vertebrae space to grow in properly.

Designed to treat moderate to severe scoliosis, vertebral body tethering typically is recommended for adolescents during puberty who are still growing. Dr. Larson suggested Camden would be a good candidate. Because this is a new procedure that hasn't been in use long, though, Teresa wasn't ready to commit to it without doing some additional research.

"Dr. Larson talked to her like a real person ... She took her time and gave us all the information we needed." - Teresa Christoperhson

In Philadelphia, Camden and Teresa met with surgeons that had pioneered vertebral body tethering. Those doctors agreed Camden would be a good fit for the procedure. They had also worked with Dr. Larson in the past and confirmed she was an appropriate surgeon to do the job.

"When I asked Camden what she wanted to do, she told me she wanted the VBT surgery and she wanted to go to Dr. Larson at Mayo Clinic," Teresa says. "The two of them really clicked. Dr. Larson talked to her like a real person. She made sure Camden understood what she was saying. She took her time and gave us all the information we needed. We felt we could have confidence in her."

Camden returned to Mayo Clinic and had vertebral body tethering surgery in June 2015. Dr. Larson was joined in the operating room by thoracic surgeon Stephen Cassivi, M.D., and pediatric orthopedic surgeon Todd Milbrandt, M.D. Together, the team conducted the procedure through five small incisions on Camden's right side. Guided by images from a tiny camera inserted through her back and using a technique called intraoperative low-dose CT computer navigation, the surgeons inserted the screws and cord into Camden's spine without needing a large incision or causing any significant muscle damage.

After the surgery was complete, Camden spent a week in the hospital recovering. Once out of the hospital, she had regular follow-up appointments to check her progress.

"Six months after surgery, she can do whatever she wants," says Teresa. "Her back is very straight. She has total flexibility. She can roll into a ball and completely curve her back. She can do all her sports again. When she had to wear the brace before surgery, it was very sad. It was uncomfortable and confining. She couldn't do much. Now she feels like she has her life back."

"I am so very lucky to have had this surgery. My mom and my doctors were so passionate about trying new things and being open-minded. - Camden Christopherson

Although it's possible vertebral body tethering may be the last treatment Camden needs for scoliosis, the long-term results for the surgery aren't clear yet because the procedure is so new. At this time, though, it looks to be an encouraging step forward in the scoliosis treatment choices available to teens like Camden, who is happy she had the opportunity to give it a try.

"I am so very lucky to have had this surgery," Camden says. "My mom and my doctors were so passionate about trying new things and being open-minded. They made it possible, and this surgery couldn’t have been done without them."

From Teresa's perspective, it wasn't an easy road, but the effort to find an alternative solution for her daughter was well worth it.

"To be honest, this situation scared me. It was very intimidating to pick the way forward and hope it turns out okay for my child decades later," she says. "I so appreciated everyone at Mayo Clinic being there for us. Dr. Larson answered every question patiently. She and her team were with us all the way, and they still are. We needed something more, and they guided us through that. We wanted more hope. This is our hope and so far, it's been great."

Is this a possible for someone 50 of age?

Is there any research on the progression of joint degeneration following the procedure? Additionally would osteopathic, physical therapy or chiropractic manipulation be contraindicated following this procedure as it typically is following scoliosis correction with Harrington rods?

Is the tethering surgery viable when there is rotation of spine as well as S curves? I can’t hardly imagine my granddaughter having a totally fused spine and very little flexibility.