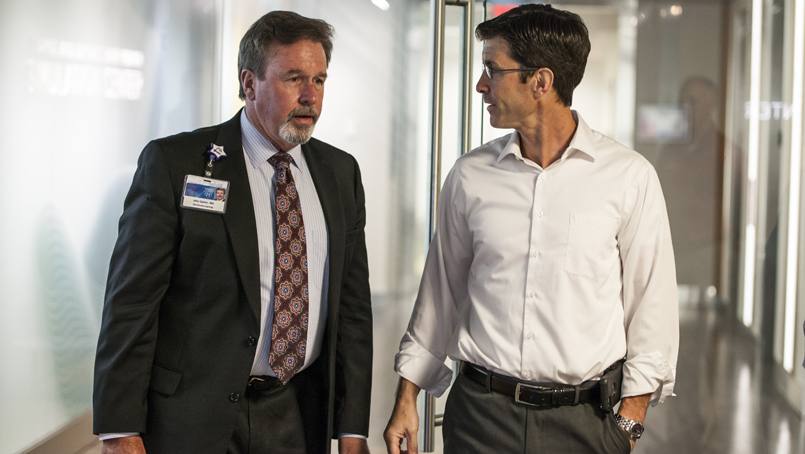 For six months, Chad Thompson slept sitting up to ease debilitating headaches caused by a tumor growing on a nerve in his head. Now, after a successful surgery at Mayo Clinic’s Florida campus in March, the 40-year-old Jacksonville resident is having conversations with friends and co-workers that he never expected.

“People keep asking, ‘When are you going to have that surgery,’” says Chad, a married father of three children and an executive at an aerospace company. “They’re shocked when I say, ‘I already had it,’ and I’m not sure they believe me.”

The reason for this response is that he has no visible scars from the operation, which his surgeon, John Casler, M.D., performed with help from the Anatomage “virtual dissection” machine in the J. Wayne and Delores Barr Weaver Simulation Center.

Purchased with philanthropic support from the Setzer family of Jacksonville, Florida, the Anatomage machine looks like a table-size touch screen, and it renders the human body and anatomy in three dimensions. It was originally created to reduce the need for cadavers in anatomy training for medical education, but it can also be used for surgical planning and case study review. Mayo Clinic has used it in patient care applications nearly 30 times and is one of the first medical centers to use it for that purpose, according to Conrad Dove, an information technology specialist in the simulation center.

Chad's case may be the most extensive example to date of the Anatomage’s application for patient care, says Dove.

With help from Dove and the machine’s technology, Dr. Casler, chair of Otorhinolaryngology at Mayo Clinic's Florida campus, found a better way to remove a 5-centimeter schwannoma, a benign nerve-sheath tumor, from Chad's head.

“Chad’s tumor was in a hard-to-reach place, behind his cheek bone and extending into his brain,” Dr. Casler says. “The best option for removal seemed to be a procedure that involved splitting his jaw. It would leave him with a significant scar on his face, and we were both concerned about that.”

“We left the meeting feeling confident we could do it and feeling like we had done everything we could to stack the odds in Chad’s favor.” - John Casler, M.D.

Dr. Casler and Chad wrestled with that concern for several weeks. Chad researched anatomy and surgical techniques and sought a second opinion at another medical center, but he didn’t find another alternative. So he talked to his family and friends to prepare them for the potential outcome of his surgery.

“I told my oldest daughter, ‘I’m going to look different, but I’ll still be the same,” Chad says. “With the scheduling, I was going to be in the hospital on Easter Sunday, which is a big family day for us, but my wife and I agreed I’d spend it alone because we thought the shock would be too much for the kids.”

Then, about two weeks before the surgery, Dr. Casler thought of a different approach, one that would use an incision underneath Chad's upper lip and through the bone of his mid-facial skeleton to access the tumor. It would cause no scarring to Chad's face, but Dr. Casler needed to find out if the idea was feasible.

A ‘mental map’ of the best approach 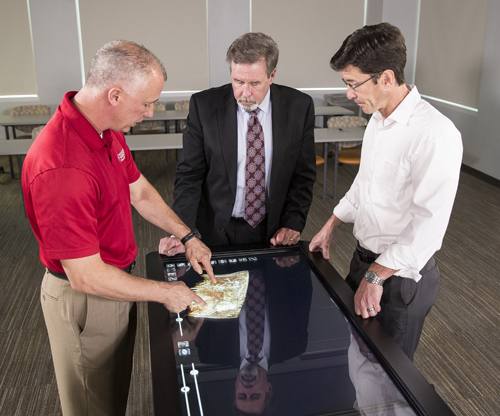 Enter Dove and the Anatomage. With a special MRI of Chad's head and neck, Dr. Casler and his team met with Dove in the simulation center and looked at – and manipulated – the 3-D images the Anatomage created from Thompson’s MRI. Within 45 minutes, they pinpointed the tumor’s location, identified troublesome blood vessels they would have to avoid, and developed a “mental map,” Dr. Casler says, for the alternative surgical technique.

“We left the meeting feeling confident we could do it and feeling like we had done everything we could to stack the odds in Chad’s favor,” Dr. Casler says.

He called Chad and told him the surgery could be performed a different way.

“We use three-dimensional scanning and modeling all the time in the aerospace industry, so I was hopeful when I heard they could digitize my tumor,” Chad says. “But it was a huge relief when Dr. Casler called me and gave me the news.”

An outcome too good to see

Five days later, Chad went in for surgery. When he woke after the four-hour procedure, his headache was gone. But his face and mouth felt so swollen he was afraid to look in the mirror. Finally, he did. “I couldn’t believe what I saw,” he says. “It felt a lot worse than it looked.”

Later that day, his wife arrived at the hospital and was “tickled pink,” Chad says. The results were so good they decided it was safe to show the children. Instead of being alone at the hospital on Easter Sunday, Chad was surrounded by his family.

He left the hospital the next day and within a week looked just as he does now. A triathlete, he’s swimming and cycling and will resume running in a few more weeks.

“Now, my only problem is convincing people I had surgery,” Chad says. “I’m hoping this story will help.”

Note:  Thompson, Dove and Dr. Casler got together five weeks after the surgery for a special live video broadcast on Mayo Clinic’s Facebook page demonstrating the Anatomoge table and reviewing Chad’s case. Watch the broadcast, which has been viewed more than 160K times, and share it with your friends.