Refusing to Give Up After Devastating Accident, A Farmer Finds Help and Healing at Mayo Clinic 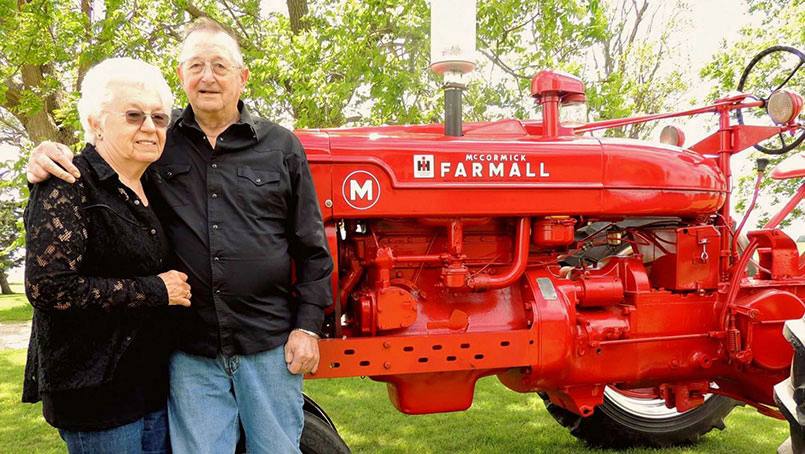 When Gene Franke left his farm in rural Hayfield, Minnesota, driving a semi-trailer truck loaded with hay and bound for Oklahoma, he never imagined the return leg of his journey would be as a passenger in an air ambulance jet. But in September 2011, that’s exactly what happened.

A serious accident left Gene paralyzed and in critical condition. Doctors in Oklahoma didn’t think he would survive. Longtime patients of Mayo Clinic, Gene and his wife, Barbara, were determined to get him back to Mayo's Rochester, Minnesota, campus for care.

“The doctors at Mayo Clinic knew what was going on, and they assured us they could do something for him,” Barbara says. “We knew he had to get up here. The care at Mayo Clinic is like nowhere else. We’re used to it, and that’s what we wanted.”

Ultimately, Gene was flown from Oklahoma to Minnesota on Mayo Clinic’s medical aircraft. Once there, he underwent surgery, followed by months of rehabilitation. Although progress has been slow at times, and he still requires assistance to walk, today Gene is back to enjoying life on his farm.

“I try to do more all the time,” he says. “I have some neighbors I go visit. I’ve got a four-wheeler I drive around, and I mow the lawn. I haven’t gotten on a tractor yet, but that’s my next goal. Mayo Clinic didn’t give up on me, and I’m not giving up, either.”

Gene’s medical ordeal began when he and several others were unloading the hay from his trailer at a friend’s farm in Oklahoma. One of the large bales, weighing about 800 pounds, came over the top of the loader and hit Gene. He was knocked unconscious. Tests later revealed that the impact broke bones in his neck and caused severe injury to his spinal cord.

When he woke up in a hospital, Gene was stunned learn the extent of his injuries. “I couldn’t move. I couldn’t do anything,” he says. “I could wiggle my toes. That was it.”

“The doctors at Mayo Clinic knew what was going on, and they assured us they could do something for him. We knew he had to get up here.” - Barbara Franke

Given Gene’s age at the time, 73, and the severity of his spinal cord damage, doctors were reluctant to move forward with any treatment. But Barbara and the couple’s children, who had all come to Oklahoma when they learned about the accident, were not willing to leave it at that.

“They told me I’d probably die before they got me to Mayo Clinic, so there was no sense in moving me,” Gene says. “They said my injuries were permanent, and I would never get any better. If I would have stayed down there, there would have been no surgery, no rehab.”

Despite the dire predictions, physicians at Mayo Clinic familiar with Gene’s situation were still confident they could offer treatment that could help. With that, Barbara was determined Gene would go to Rochester.

“We were going to get him to Mayo Clinic, whatever it took,” she says. “When someone in the hospital in Oklahoma told me he wouldn’t make it up here. I said, ‘Well, we’re going to find out.’”

Fortunately, the travel went well. The crew on board the Mayo medical airplane provided care at an intensive-care-unit level throughout the flight, and Gene arrived at Mayo Clinic without incident. Soon after, he underwent surgery to repair and stabilize his spine.

After surgery, Gene began the long process of regaining his ability to walk and perform other daily tasks. He went to rehabilitation every day he was in the hospital, a stay that lasted three months.

“It went little by little. I felt like a kid learning all new things,” Gene says. “There were times I’d say, ‘Hey, I haven’t done that before.’ I remember the first time I could get my hands around a cup of coffee and drink it by myself. You can’t believe the little things that a person does every day and doesn’t think a thing about until you lose it.”

After Gene left the hospital in December 2011, he continued to attend rehabilitation sessions at Mayo Clinic twice a week for eight more months. He then transitioned to an outpatient rehabilitation center, where he still attends sessions as he is able.

“You can’t believe the little things that a person does every day and doesn’t think a thing about until you lose it.” - Gene Franke

“When I had surgery, they didn’t know how well I’d do. In rehab after surgery, though, they thought I’d be able to get up on my feet, and I did,” Gene says. “I do use a wheelchair most of the time now. But I can get up and move around with a walker. I can shave, eat on my own. I have workout equipment I use. I do as much as I can.”

Throughout Gene’s recovery, the Frankes have remained grateful for his care at Mayo Clinic.

“We’ve always gone to Mayo Clinic, so we were extremely pleased to get him here,” Barbara says. “We knew we could rely on them to give Gene the best care he could get.”

“Everyone was just wonderful,” says Gene. “The people in rehab especially were unbelievable. Just the best. Mayo Clinic gets an A+ from me.”