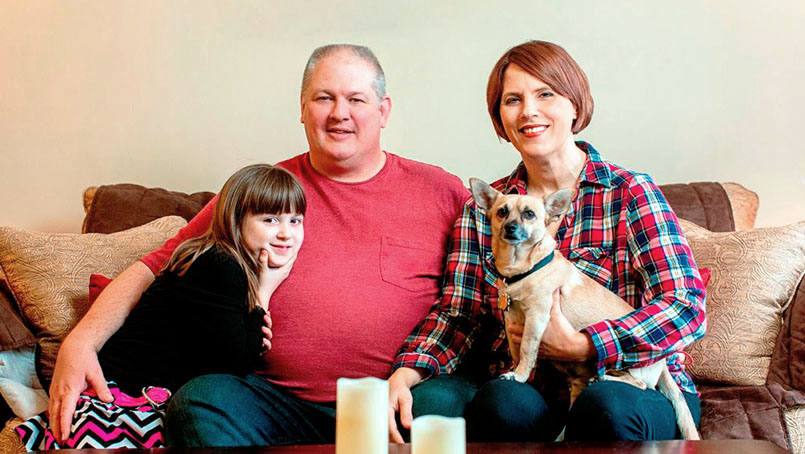 Growing up in Central Florida, Kimberly Kimmons was an active child. She loved swimming, biking and martial arts. But at age 12, Kim was diagnosed with scoliosis, a sideways curvature of the spine that most often occurs during a growth spurt before puberty. Unfortunately, Kim’s family didn’t have the resources to fully address her spinal issues, and the scoliosis continued to get worse.

Years later, when Kim and her husband, Kent, searched for specialists to help fix her back problems, they found neurosurgeons at Mayo Clinic’s campus in Jacksonville, Florida, who were confident they could help. But as they assessed her condition, Kim’s care plan became more complicated. In the end, she had three surgeries at Mayo Clinic to remedy back and neck issues. With time and recovery, Kim was able to reclaim her life.

“The team at Mayo, they are amazing. They really go above and beyond the call of duty. They don't just do their job, they do their job 110 percent,” Kim says. “I wouldn’t go anywhere else.”

From the time she was diagnosed with scoliosis as a preteen into her adult years, Kim learned to work through the pain that accompanied her condition. Eventually, though, she was forced to give up her active lifestyle. Walking became her main form of exercise, as it was the only activity she could do without increasing her pain.

By age 39, after giving birth to her second child, Kim’s scoliosis worsened to the point that she could no longer sit or stand easily. Her spine curved so much that she says she was “essentially sitting on her backbone.” It also was pushing on her internal organs, causing bruising and other challenges.

“The pain in my back became so excruciating. It felt like somebody gave me an electric shock,” she says. “I couldn’t sit and when I’d try to stand, if I leaned forward, the pain would just shoot all over my body.”

Then she began losing feeling in her extremities. A seamstress who had turned her hobby into a business designing and creating heirloom christening and dedication gowns with intricate embroidery, Kim was terrified when her hands lost feeling.

“We realized … we’d get to an institution in a higher tier, with a top team of experts … It was a no-brainer.” — Kent Kimmons

“It got to the point where I couldn’t hold a needle, because either I couldn’t feel anything or my fingers would burn like fire,” she recalls. Then she started dropping things and could barely manage a weak grip. Her legs were also becoming increasingly unsteady.

A search for answers

Kim and Kent sought out various specialists near their Titusville, Florida, home. “None of the doctors, though, wanted to even look at me; I had such a complicated spine,” Kim says.

“We wanted the best, so we did a lot of research,” Kent says, adding that staying close to home was important for the family. Although a few surgeons in the nearby Orlando area kept coming up in their research, so did Mayo Clinic. “We realized that driving another two hours, we’d get to an institution in a higher tier, with a top team of experts, according to U.S. News and World Report. It was a no-brainer.”In July 2013, Kim and Kent traveled the 130 miles north to meet with Gordon Deen, M.D., and Mark Pichelmann, M.D., neurosurgeons who led the complex spine team at Mayo Clinic's  Jacksonville campus.

“When we met Ms. Kimmons, we discovered that she had what's called a ‘double major curve,’ a significant problem where she had two curves in her back. For us to correct it, she would need a complex spinal surgery,” explains Dr. Deen.

The recommendation was a thoraco-lumbar deformity correction and spinal fusion procedure, an extensive surgery where doctors use bone, metal plates, screws or rods to realign and permanently connect two or more vertebrae in the spine, eliminating motion between them. Surgery was set for December.

A pain in the neck

Two weeks prior to the procedure, a series of X-rays revealed two bone spurs on Kim’s neck that were beginning to pierce her spinal column. Left untreated, Kim would become paralyzed.

“We identified that Ms. Kimmons had a spinal cord compression in her neck that we had to treat on an urgent basis,” says Dr. Deen. “Though this was not part of the original surgical plan, part of Mayo Clinic’s approach is having a team of experts working together for each patient to address unexpected issues, especially on a complex case like hers.”

“I went in with incredible pain in my neck and arms and woke up pain-free,” recalls Kim.

Looking back, Kent says he was in awe. “If we hadn't gone to Mayo, we never would've known about her neck. Kim could be paralyzed today,” he says. “The fact that Mayo stopped, regrouped and planned a whole new surgery for my wife, to me, that’s just attention to detail that you don’t get anywhere else.”

Due to the complexity of the spinal procedure she still needed, doctors recommended an extended recovery time for Kim with continuous monitoring.

“We knew her scoliosis was continuing to progress. We needed to stay on top of it to plan the most effective surgical approach,” says Dr. Deen, noting that at one point, Kim’s spinal curve grew by almost half a degree between visits. Finally, on Aug. 27, 2014, Drs. Deen and Pichelmann, with a team of colleagues, performed the first procedure to repair Kim’s spine. The second operation followed on Sept. 4.

“Mayo Clinic saved me. I have my life back. I can do the things I want to do.” — Kimberly Kimmons

“What we needed to do with Ms. Kimmons was a two-stage operation. In the first stage, we did a very lengthy fusion on her back, from her middle back area down to her pelvis. We used long rods and screws. By doing that, we were able to correct the scoliosis completely and get rid of that bad deformity that was impacting her,” says Dr. Deen.

After that, the care team allowed Kim a few days of recovery. She then returned to the operating room to complete the process. That surgery involved making an incision on Kim’s abdomen to give the team access to the front of the spine where her surgeons performed a fusion of the lower lumbar spine down to the pelvis.

The road to recovery

Kim admits recovery was not easy. She began walking a few steps each day with a walker so she could regain her balance. Then, independently, adding a few more steps daily. Kent remembers the pride and excitement they felt when Kim managed the sidewalk in front of their home. “Many would not consider that short distance a victory, but it was,” he says.

Over time, Kim found walking made her feel better. She’s worn out several pairs of shoes and now can walk three miles easily. “I have no back pain and no nerve pain,” she says. “I can exercise, use weights, and ride a bicycle, even jog now.”

She’s also returned to her business and is currently contemplating a line of men’s outerwear and a bridal collection.

“Mayo Clinic saved me. I have my life back. I can do the things I want to do, including work on my Kimberly Couture business,” she says, adding that her daughter has placed an early order for her wedding gown.

“Kathryn is 7, but she has already told me she wants to be a doctor first and then get married. And she wants me to make her a very classy, but not too showy, elegant wedding dress,” Kim says with a laugh.

“It’s wonderful having my wife back,” says Kent. “We can do whatever we want to do now. Mayo Clinic gave us that.”

Hear directly from Kim, her husband and her care team in the video below.

I had no idea Thw Mayo Clinic did spinal surgery. I NEED to be seen and have a 2nd opinion. Im facing (this is the doc) a HUGE spinal surgery, a whole back fusion. I have.half a screw.in .my back. It broke in 2 and they only got half out. Its too much to talk about.