Liver Transplant Allows Young Father to Be There for His Family 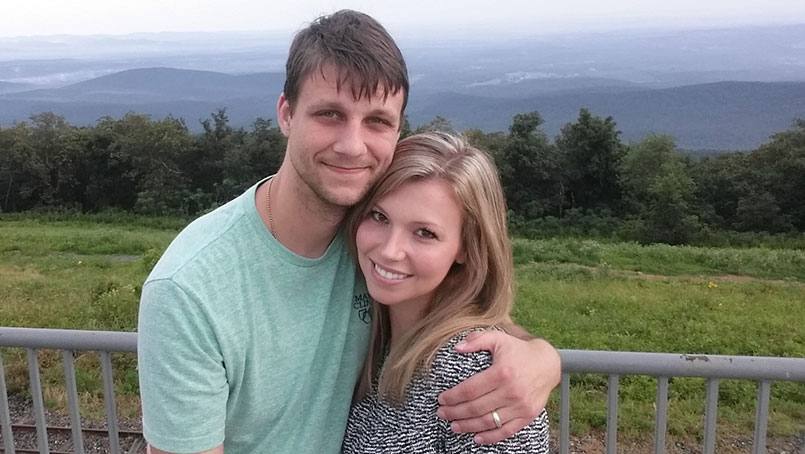 Bryan Duncan didn't think twice about the lab tests he had as part of a routine medical checkup in the fall of 2014. A 29-year-old father of two small children, Bryan led a busy life, didn't have any health problems, and felt fine.

When the test results came back, though, they showed enzyme levels in Bryan's liver were higher than normal. This unexpected finding kicked off more than two years of extensive medical care. It brought Bryan from his hometown of Mountain View, Arkansas, to Mayo Clinic's Rochester campus, where he was diagnosed with a rare liver disease, and where he eventually received a life-saving living-donor liver transplant.

"The way my disease works, if I had waited for a deceased donor, I probably would have been too sick for a transplant," Bryan says. "Being able to have a living-donor transplant opened up the opportunity for me to get the second chance I needed."

After seeing Bryan's initial test results, his local care team ran a series of additional tests to investigate the cause of his elevated liver enzymes. They suspected a liver disorder known as primary sclerosing cholangitis, or PSC. The only cure for the progressive, life-threatening disease is a liver transplant.

"Being able to have a living-donor transplant opened up the opportunity for me to get the second chance I needed." – Bryan Duncan

He required emergency surgery at a larger regional hospital to remove part of the intestine where the tissue had died off due to lack of circulation. Doctors there discovered Bryan had a rare blood clotting disorder that would make a transplant significantly more complicated than usual. At that point, Bryan and his wife, Julie, decided to seek a second opinion.

"A nurse at the hospital suggested Mayo Clinic. So Julie got on the internet and went to their website," Bryan recalls. "There was a place on the site to make an appointment. She clicked on that, put in my information, and we got an appointment. That's all it took. We went up there within a month. It's amazing to me that all we had to do was go online and fill out a form, and that got us hooked up with Dr. LaRusso, who is one of the top doctors in the world who knows about PSC."

Nicholas LaRusso, M.D., a physician in the Division of Gastroenterology and Hepatology,  met with Bryan and Julie when they arrived at Mayo Clinic. With some further testing, he quickly confirmed the couple's suspicion that Bryan did, indeed, have primary sclerosing cholangitis.

The condition affects the bile ducts. Those ducts carry the digestive liquid bile from the liver to the small intestine. PSC triggers inflammation within the bile ducts that causes scarring, making the ducts hard and narrow. That eventually leads to serious liver damage. Without a transplant, long-term survival is unlikely for people with the condition.

After the diagnosis, Dr. LaRusso recommended Bryan work with physicians in the Mayo Clinic Transplant Center to prepare for a liver transplant. Bryan's name was placed on the waiting list for a deceased donor liver in August 2015. Due to his condition and age, however, his transplant team advised him that a matching liver might not become available for quite some time. They recommended he pursue a living-donor liver transplant instead.

Living donors are an option for liver transplants because the liver is one of the few organs in the body that can regenerate itself. That means a portion of a liver can be removed from one person and placed in someone else who needs a new liver. After transplant, both livers regrow to full size within a few weeks.

Several people stepped up and offered to be a living donor for Bryan, but testing showed that none was an appropriate match. Then Julie's father, Garry, volunteered to make the trip to Rochester to go through the donor evaluation. 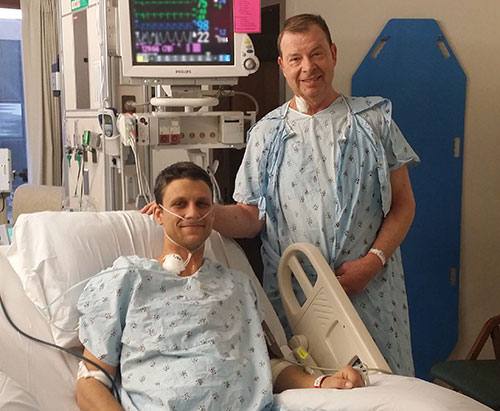 Despite those odds, after all his tests and appointments were complete, Garry was approved as a liver donor for Bryan. On Feb. 19, 2016, in a procedure that involved two operating rooms and three Mayo Clinic transplant surgeons, Bryan received a portion of Garry's liver.

"We have told my dad many times how thankful we are for what he did. But the times when I know he gets the most gratification is when he sees Bryan out playing with our kids and enjoying this new chance at life," Julie says. "I'll look over at him sometimes and see a big smile on his face. He doesn't have to say it, but I know he is thinking about how happy he is that Bryan is doing good and that everything worked out so well."

A focus on tomorrow

Before his transplant, Bryan worked hard to stay as healthy as possible and maintain normalcy in his life, despite his condition. Seeing a young man in his 20s with a four-year-old son and a two-year-old daughter, many people around Bryan didn't realize the severity of his medical situation. But Bryan clearly understands the deep significance of his father-in-law's gift to him.

"Having PSC, I would have died without a transplant. No question. In a few years, there’s nothing they could have done," he says. "So obviously it's made a huge difference in my health. But the transplant has also allowed me to stop thinking about dying before my kids get to middle school. Now I'll get to see them grow up, walk my daughter down the aisle, the kind of things every dad looks forward to."

"The transplant has also allowed me to stop thinking about dying before my kids get to middle school. Now I’ll get to see them grow up, walk my daughter down the aisle, the kind of things every dad looks forward to." – Bryan Duncan

Today, Bryan is back to work and enjoying his family at home in Arkansas. He still requires checkups to make sure his new liver is working properly. His blood clotting disorder also needs monitoring, and he has tests on a regular basis to confirm that the PSC has not returned.

Much of the intense medical intervention Bryan needed before the transplant is behind him now, though. Looking back on his time at Mayo Clinic, Bryan says he is grateful for the personal care he received as he was going through the transplant preparation, surgery and recovery.

"The people of Mayo Clinic are very kind. We were used to that with our local hospital. Everybody knew us. It was small and friendly. Then we had to go to a bigger regional hospital, and we felt like I was just a number," Bryan says. "At Mayo Clinic, it's a big hospital, and you get world-class care, but it feels like a local place. I felt like the people knew who I was. They cared about me, and they focused on my needs in every way."

I have had my Gamma- glutamyl tranferase and Alkaline phosphatase high since 2011, and it has been increasing constantly.

I did many tests to find the cause of this values once we couldn’t find it , the doctor told me to do a liver Biopsy, in 2015 and it said there is a high chance of being a sclerosing cholangitis.

This disease doesn’t have cure when it gets to complicated the only solution is liver transplant, and life expectancy is not to high once you have the disease.

The symptoms that at this point i feel is feeling nausea sometimes, i don’t now if it is really related to the disease.I feel a lot of tiredness and with lack of energy too.

I just read an article that says that children with PSC had good results with antibiotic vancomycin.

Is this antibiotic really effective?

Who can guide me with this treatment?

I live in Portugal there is a doctor that follows this treatment and can give consultations through Skype?

Please help me I feel very hopeless with my disease.

Look forward to hearing from you