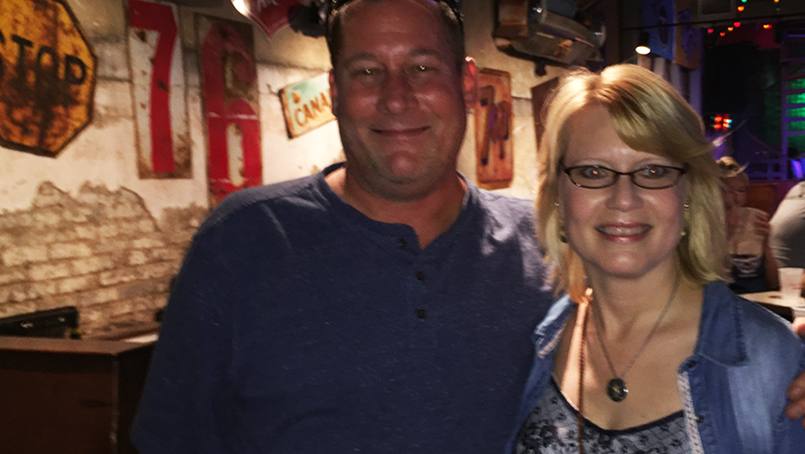 Stephanie Cortez had been battling the scale for most of her 47 years. Weighing 240 pounds, the Lake Park, Georgia, resident decided to undergo gastric bypass surgery in 2008 in the hopes of losing a hundred pounds.

Stephanie made steady progress for the next six years. She adopted and maintained a healthier lifestyle and better eating habits. Then she hit a roadblock. In 2014, Stephanie developed a bleeding ulcer in the stomach pouch created during her surgery.

Though the ulcer healed, scar tissue created additional problems, including a narrowing of the area between the stomach pouch and intestine. The condition, called the gastrojejunal anastomosis, caused an intestinal obstruction.

“I was on a business trip when I experienced severe symptoms. It was on a Monday. I went to Thursday without being able to digest anything,” Stephanie says.

She knew it was serious, and she worried about what it would mean for her future.

Stephanie visited a local hospital to let them know that food wasn’t leaving her stomach. The doctors performed an upper endoscopy in an attempt to dilate the narrowed area. Unfortunately, she ended up with a perforated intestine, which then required emergency surgery.

The surgery was successful, but Stephanie was now left with a large opening between her stomach pouch and intestine. As a result, she never felt satiated after eating, and she experienced daily nausea and diarrhea after meals. It disrupted every aspect of her life.

A local physician diagnosed her with dumping syndrome — a condition that occurs when food moves from the stomach into the small bowel too rapidly.

“I was always anxious. I didn’t like eating in public, since I didn’t know if I would become ill. I avoided going out to eat,” Stephanie says.

Hope on the horizon

Stephanie suffered with her symptoms for a year, visiting several other physicians in search of an answer. Then she decided to contact Mayo Clinic. She was hopeful because she had visited Mayo Clinic for an earlier health issue, and the experience had gone well. Stephanie called to make an appointment and, in August 2015, she made the two-hour drive from her home to Mayo Clinic’s Florida campus.

“In a small number of gastric bypass patients, the opening between the stomach and small intestine becomes dilated,” Dr. Gómez says. “There are several options available for these patients. Surgical revision of the anastomotic opening is one option but can be technically challenging due to several factors.”

“I was thrilled that there was another option other than surgery.”  — Stephanie Cortez

The alternative, called transoral outlet reduction, or TORe, is an outpatient procedure that has a shorter healing time, and is less complex and risky than the traditional surgery. It has been proven to be safe and provide lasting results.

“In the TORe, an upper endoscopy is performed, and the connection between the stomach pouch and intestine is reduced with full-thickness sutures that are placed from the inside of the lining of the intestine,” Dr. Gómez says. “It is a simpler procedure.”

After learning about this procedure from Dr. Gómez, Stephanie had faith that it could solve her problem.

“I was thrilled that there was another option other than surgery,” Stephanie says.

A sense of normalcy

On Feb. 15, 2016, Stephanie underwent the procedure. It was an overwhelming success. She had no side effects other than slight tenderness in the abdomen following the procedure.

“I didn’t expect my body to heal so quickly,” Stephanie says, noting she felt fine just a few days later. “I almost felt silly for taking the week off of work.”

“It feels good to be in control of my body, to not be in pain and not have anxiety over whether or not I will get sick.”  — Stephanie Cortez

Today, Stephanie’s life is better than ever. Going out to a restaurant with her husband is a favorite treat.

“To be able to sit down and eat a meal, and feel full — that’s one of the best feelings,” she says. “It feels good to be in control of my body, to not be in pain, and not have anxiety over whether or not I will get sick.”

Stephanie is grateful to Dr. Gómez and the rest of her Mayo Clinic team for their skill and use of technology that has allowed her to regain control of her body. The icing on the cake: she’s lost 100 pounds and has been able to maintain her ideal weight.