Relieving Side Effects of Breast Cancer Treatment With Microsurgery 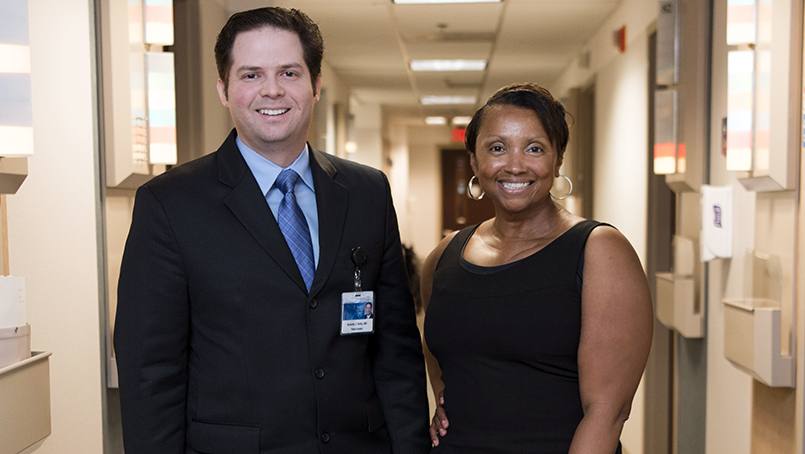 In May 2013, at age 47, Angenette Monroe was diagnosed with invasive cancer in her left breast. After six months of chemotherapy, she had a mastectomy as part of her treatment plan.

The former gastroenterology technologist had participated in many medical procedures and was well aware of the challenges people can face after surgery. But as an active woman who exercised and was always on the go, Angenette never expected her treatment would prevent her from enjoying life.

But it did. Side effects after surgery kept Angenette from activities with her husband, including running and traveling, as well as visits with her three children and her grandchild.

She also dealt with lymphedema for more than a year. Then Angenette turned to physicians at Mayo Clinic’s Florida campus for help. They were able to offer her a unique surgical approach, called lymphovenous bypass, that eased her symptoms.

She had picked the right place to seek help.

“Mayo Clinic is one of a few centers in the country offering patients this minimally invasive surgery, which has been shown to significantly improve their quality of life,” says Antonio Forte, M.D., a Mayo Clinic plastic and reconstructive surgeon.

Lymphedema occurs when lymphatic fluid accumulates in an arm or leg because the lymphatic vessels are unable to adequately drain. About 20 percent of breast cancer patients develop lymphedema after treatment. People who have lymphedema experience swelling and are prone to chronic skin infections. They typically require an array of treatments to manage symptoms.

Angenette first noticed swelling in her left arm a month after surgery. Although her surgeons warned her that removing lymph nodes as part of her mastectomy could result in lymphedema, she had no idea how painful and uncomfortable the condition would be.

“My left hand would swell, and I would have to take my rings off. Then my left arm would swell up a lot, and I would be in a lot of pain,” Angenette says. The constant pressure and thumping sensation in her arm kept her from going running with her husband, Lewis.

“I can’t thank Dr. Forte enough for this miracle. I am so grateful for what he has done for me and my family.” — Angenette Monroe

To help with the swelling, Angenette wore a compression sleeve every day. She also went to a physical therapist for six months to help reduce her symptoms.

“It relieved my pain but not the swelling,” she says. “The lymphedema was greatly affecting my quality of life.”

Angenette’s swelling worsened when she used her left arm a lot or if she drove for more than two hours. Due to the severity of the condition, at times Angenette was not able to venture more than an hour from her then home in Great Lakes, Illinois. Some days it was a struggle to get to and from her medical appointments in Milwaukee, Wisconsin.

In June 2015, Angenette went on her first vacation since being diagnosed with breast cancer — a Caribbean cruise. She loves to travel and was hopeful that the worst was behind her. After flying, though, Angenette’s symptoms worsened. Her face and chest swelled up significantly, making the travel anything but pleasant. After that, she stopped flying to avoid the pain.

At Mayo Clinic, she met with breast health specialist Dawn Mussallem, D.O., a member of the Robert and Monica Jacoby Center for Breast Health. Dr. Mussallem suggested Angenette see Dr. Forte, who specializes in microsurgical techniques, including one to help lymphedema patients.

When Angenette met with Dr. Forte, she learned about lymphovenous bypass, where physicians reroute part of the lymphatic system to improve fluid flow, thus reducing swelling, pain and issues.

“I didn’t even know surgery was an option to correct lymphedema,” Angenette says.

“Mayo Clinic is one of a few centers in the country offering patients this minimally invasive surgery, which has been shown to significantly improve their quality of life.” — Antonio Forte, M.D.

“With this technique, we make a few small incisions just underneath the dermis of the skin in the arm. Then, using a microscope, we connect a small lymphatic vessel and a small vein to bypass the blockage and allow the excess fluid to drain properly,” Dr. Forte explains.

“Microsurgical treatment of lymphedema allows patients to have improvement of their condition by removing the excessive fluid that accumulates in their limbs,” he says.

Angenette recalls her meeting with Dr. Forte well. “He wants to make sure you understand everything before you walk out of the room,” she says. “He told me, ‘Don’t worry we’re going to take good care of you.’ He gave me hope.”

Feeling confident the procedure would allow her to get back to doing the things she enjoys most, Angenette agreed to undergo the surgery. Dr. Forte performed the five-hour procedure on Aug. 17, 2016, and Angenette went home the same day.

Returning to an active life

Looking back, Angenette says she is amazed at the remarkable difference in how she feels and how she looks.

“This was a long journey," she says. "When I look in the mirror I see a different person. The size of my arm has changed a lot, and it doesn’t look like I have shoulder pads on anymore.”

In addition to being able to do simple things she could not do before — like raise her arm or put it behind her back — Angenette can now use her left arm much more, and she’s back to exercising.

“I can’t thank Dr. Forte enough for this miracle,” she says. “I am so grateful for what he has done for me and my family.”

Angenette says that she’s looking forward to being more physically active and to traveling again.

Given her health care experience, Angenette says she’s keeping an eye out for the right job at Mayo Clinic.

“Being at Mayo, I was able to see a lot of people that are like me, who were going through the same journey. It’s now a part of me and I want to be able to give back,” she says. “Mayo Clinic changed my life.”