Teen Receives Thorough, Compassionate Care Before, During and After a Heart Transplant at Mayo Clinic 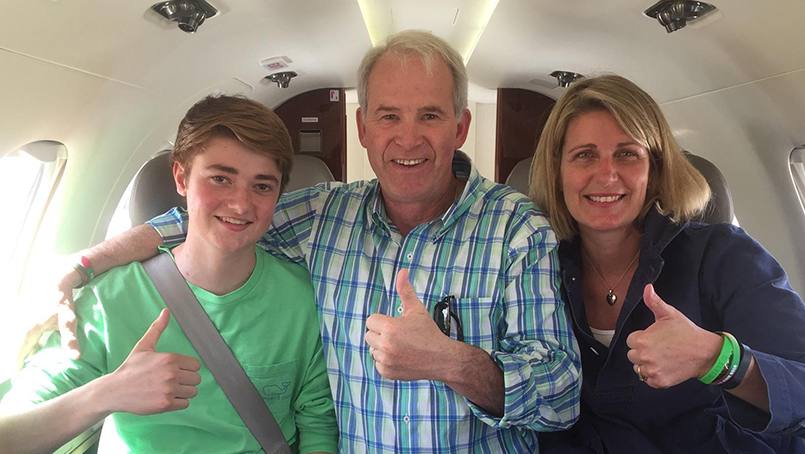 When most people think of their happy place, they envision something like a warm, sunny beach or a cozy mountain cabin. But when Lisa Fairbairn thinks about a place that gives her comfort, Mayo Clinic’s Rochester campus comes to mind.

She’s happiest there because it’s where her son Chase was given a second chance. Not only did he receive a new heart at Mayo Clinic to replace one that was failing, but the family can now rely on ongoing care from Mayo Clinic physicians who understand Chase’s medical concerns and have pledged to do their best to keep him healthy well into the future.

Before coming to Mayo Clinic’s Division of Pediatric Cardiology, Chase’s future appeared bleak. In May 2011, when he was 11 years old, Chase suffered cardiac arrest on a soccer field in his hometown of Harbor Springs, Michigan. He was resuscitated by his father, Paul. During a brief hospitalization, Chase was tested for cardiac issues, but when his test results came back normal, he was released with a diagnosis of dehydration.

Chase’s heart stopped again two months later during another soccer match. His medical providers diagnosed him with cardiomyopathy, a condition in which the heart muscle is abnormal. They implanted a pacemaker and defibrillator. In addition to prescribing Chase a number of heart medications, including beta blockers and anti-arrhythmics, his care team also informed him that he could no longer participate in strenuous activities. The idea of life without participation in sports hit Chase and his family hard.

“For a state-champion swimmer and an avid soccer player, this was certainly more than a minor life interruption,” Lisa says. “This really wasn’t an acceptable option for us.”

"Right from the beginning, Mayo’s approach was, 'Let’s not let the illness define you.'" — Lisa Fairbairn

The family limped along in their new reality for almost a year, until the summer of 2012 when Lisa attended a Mayo Clinic event in Harbor Springs, where she met Mayo Clinic pulmonologist Eric Edell, M.D.

Dr. Edell not only informed her that her son must be seen by one of his colleagues, but proceeded to immediately email that associate, pediatric cardiologist Michael J. Ackerman. M.D., Ph.D. The next morning, the family learned Chase had an appointment with Dr. Ackerman two weeks later.

To Lisa and Paul, who had grown accustomed to waits that sometimes stretched for months to see specialists and to hear about test results, the pace at which Mayo Clinic operated “was almost unbelievable,” Lisa says.

Chase’s first appointment with Dr. Ackerman was no less astonishing to the family.

“One of his first questions for Chase was, ‘How is your quality of life?’ and ‘What can’t you do that you’d like to do?’” Lisa says. “Right from the beginning, Mayo’s approach was, ‘Let’s not let the illness define you.’”

The family spent the entire morning and part of the afternoon with Dr. Ackerman. At one point they asked him whether he had other patients that day, because they felt guilty for taking so much of his time.

“Dr. Ackerman’s response was, ‘No, Chase is my priority today,’” recalls Lisa. “We were sold!”

“Whatever health challenge Chase will have to fight next, we know we are in the best hands: cutting edge research, integrative care, medical excellence and compassion.” — Lisa Fairbairn

To help determine what was causing his heart problems, Chase underwent genetic testing for the genes known to trigger his type of cardiomyopathy. The genetic test came back positive, establishing the genetic defect that was causing the cardiomyopathy. Chase had arrhythmogenic right ventricular cardiomyopathy — the most severe form of the disease. Not only can this heart muscle condition cause heart failure, it can also causes life-threatening, unpredictable electrical malfunctions in the heart.

“We were devastated,” Lisa says. “While he didn’t say it, we were quite sure Dr. Ackerman was too. I remember Chase saying, ‘This isn’t good is it?’ and Dr. Ackerman’s response was, ‘No, it’s not what we were expecting. But I’m only 40-something years old, and God-willing, I am going to spend the rest of my life figuring out this disease. I will be with you every step of the way.’”

Brave-hearted, looking to the future

Under Dr. Ackerman’s care, the family established a long-term treatment plan for Chase. It included the eventual need for a heart transplant. Two years later, during an appointment in late December, Dr. Ackerman informed the family that Chase’s heart was simply too unreliable to count on any longer.

On Christmas Eve, Chase’s name was placed on the national waiting list for a heart transplant. Throughout the wait for a heart to become available, the family says they received unparalleled support from their Mayo Clinic team. But they were equally blessed by Chase’s courage and strength.

“Chase was our rock throughout all of this," Lisa says. "He didn’t feel sorry for himself. He didn’t complain. He simply looked forward to what tomorrow would bring.”

When the family finally received the call they had been waiting for on April 16, 2016, that a heart was available for transplant, it brought with it a wide range of emotions.

“The emotional discord of feeling hopeful for our son’s future, and at the same time knowing that another family was suffering so deeply having just lost their precious child, was almost beyond comprehension,” Lisa says.

The transplant surgery went off without a hitch. Just 18 hours after surgery, Chase was out of bed and sitting in a chair. A few days later, the family saw and listened to his new heart beating strongly in his chest. Seventy-five days after his heart transplant, Chase returned home to Michigan. In September, Chase was healthy enough to return to playing soccer for the first time in five years.

From the family’s first encounter with Mayo Clinic, to diagnosis, transplant and ongoing follow-up care, Chase’s care team has been with them every step of the way, Lisa says.

“The care we’ve received from Dr. Ackerman and the team of doctors at Mayo is beyond words,” she says.

Chase’s medical journey did not end with transplant, however. For the rest of Chase's life, his medical team will work with him to ensure his body doesn’t reject his new heart.

“As daunting as his medical needs are in the future, we know there is no place we would rather be for his care,” says Lisa. “Whatever health challenge Chase will have to fight next, we know we are in the best hands: cutting edge research, integrative care, medical excellence and compassion. What an amazing package. We have hope, thanks to Dr. Ackerman and Mayo Clinic.”