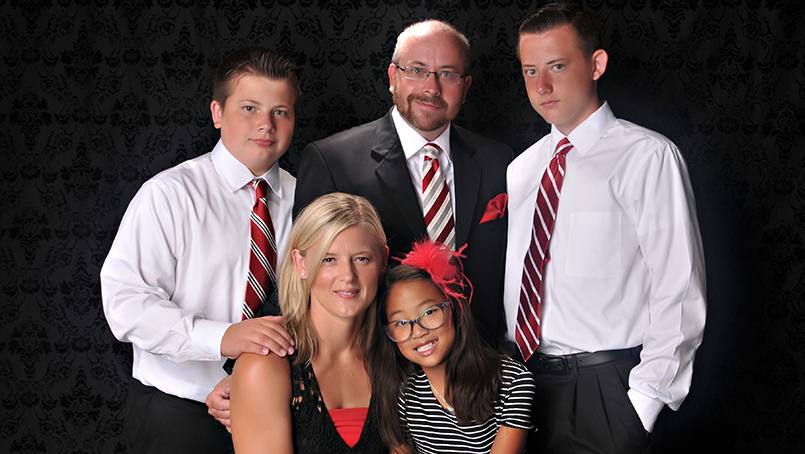 As a father of three and the district manager for 11 large retail stores in Houston, Chad Fogle was used to being tired. But in the spring of 2015, he began experiencing exhaustion far beyond what was typical.

“Two hours of being out doing something would exhaust me as much as working 12 hours,” Chad says.

He also began having memory loss. Sometimes he would drive to one of his stores and not remember how he got there. Some days he’d have to go back to his car four or five times because he kept forgetting things.

“I was living in a constant fog,” he says.

The troubling symptoms triggered a search for answers that eventually led Chad to the Hereditary Hemochromatosis Clinic at Mayo Clinic’s Florida campus. There, he met a team of experts who were able to help him map out a comprehensive plan for monitoring and treating his condition.

When Chad began having serious fatigue and memory loss, he suspected they were more than the effects of a high-stress job. He went to see his primary care physician, who recommended he take some time off. But despite a two-week vacation, the fatigue and forgetfulness continued.

“One morning I had moved my company vehicle out of the driveway, so the kids could play, and then I went to take out the trash,” Chad says. “Seven hours later, I found my car on the street still running with the keys in it.”

“I was living in a constant fog.” — Chad Fogle

After that, his physician recommended Chad have a brain MRI scan, as well as a variety of lab work. When everything came back fine, the physician suggested Chad consult with a neurologist. Chad went to see a neurologist close to his home who, after ordering an electroencephalogram, or EEG, told Chad he may be experiencing the early stages of dementia.

“It was devastating to hear something like that. I was 41 with a wife and three kids,” Chad says. “Given the uncertainty of my condition, I decided to step down from my position at work and run just one store. But I still had these episodes of chronic fatigue.”

Chad followed up with his primary care physician in the fall. Lab work revealed low testosterone levels — something the doctor believed might be causing Chad’s symptoms. He began taking medication for it. But by December, Chad didn’t feel any better.

“I was sharper but still felt very exhausted,” Chad says. “Because the fatigue was so bad, my wife and I decided I should go see an endocrinologist.”

In June 2016, he met with a local endocrinologist who explained that Chad was too young to be on testosterone injections and recommended blood work to test his iron levels. When tests for those levels came back extremely high, the endocrinologist referred Chad to a hematologist.

“By using a comprehensive approach that not only looked at solid organs like Chad’s liver and heart, but also his endocrine system, our multidisciplinary team was able to outline a full plan for treatment and monitoring,” — William Palmer, M.D.

He also recommended a genetic test for the condition hemochromatosis — a hereditary disease that causes the body to absorb too much iron from food. When Chad met with the hematologist, a review of his tests confirmed the diagnosis.

Typically, hemochromatosis affects people of Northern European ancestry and occurs more frequently in men than in women. Over time, the excess iron can interfere with normal functioning of the liver, heart, pancreas and reproductive glands (ovaries in women and testicles in men). If left untreated, hereditary hemochromatosis can cause cirrhosis, liver cancer and heart failure.

It wasn't the answer Chad was hoping for.

“I had not felt well for a year and a half, and then this hematologist told me I have this incurable genetic disease,” says Chad. “I was so upset.”

Chad had no family history of the disease, so he decided he wanted to talk with another specialist about his diagnosis. Earlier in his career, Chad had managed stores in the Jacksonville, Florida, area. Remembering an experience his son had at Mayo Clinic’s Florida campus, Chad decided to seek care there. When he called, Chad was directed to William Palmer, M.D. , a gastroenterologist and hepatologist in the Hereditary Hemochromatosis Clinic.

That was the turning point in his search for answers.

“Our clinic is the only multidisciplinary hemochromatosis clinic in the world,” Dr. Palmer says. “We provide a comprehensive program that includes a consult with a liver-hemochromatosis specialist, a certified nutritionist and genetics specialists. We perform specific genetic tests that aren’t offered at most other places.

“We also have the most advanced imaging tests that in many cases eliminate the need for an invasive liver biopsy to diagnose the stage of the disease,” Dr. Palmer notes.

“I walked into Mayo with butterflies, not knowing what would happen,” Chad says. “My wife couldn’t travel with me, and going through this on my own made it even harder.”

He recalls, though, that it soon became easier, as those he met during his two-day visit were universally welcoming and caring.

“The person at the check-in desk who took my insurance card made me feel like I was the only person in that entire room, even though the lobby was full of people,” Chad says. “The ultrasound tech was very friendly. He shook my hand. He made me feel comfortable. He made me feel important.”

A partner in treatment

When he met with Dr. Palmer, Chad shared his frustration in trying to obtain an accurate diagnosis in Houston.

“I told him about the experiences I’d had with my local neurologist and hematologist, and he said something to me that was very powerful. He said, ‘Well Mr. Fogle, you’re here with me now,’” Chad says. “That really gave me comfort and confidence. I felt it was going to be okay. I now had someone on my side.”

Dr. Palmer gave Chad many of the answers he was looking for, including confirmation that hemochromatosis can cause chronic fatigue, memory loss and low testosterone. Dr. Palmer also explained that Chad’s liver was storing iron.

“He spent a lot of time explaining what hemochromatosis is and how it’s affected me,” Chad says.

At Mayo they truly have an understanding of this disease, what causes it and what effects it has on the body.” — Chad Fogle

Treatment for hereditary hemochromatosis involves removing a pint of blood from the body on a weekly basis, a process called therapeutic phlebotomy. The goal is to reduce iron levels to normal. Dr. Palmer recommended that Chad have a catheter port placed to make weekly blood draws less painful.

Chad also met with the genetics team who, after reviewing his family tree, helped determine what genes had caused the blood disorder.

“By using a comprehensive approach that not only looked at solid organs like Chad’s liver and heart, but also his endocrine system, our multidisciplinary team was able to outline a full plan for treatment and monitoring,” Dr. Palmer says.

“The nutritionists at Mayo provided me with an app and several websites to help me manage this disease. Had I not come to Mayo, I wouldn’t know about diet and how diet affects this disease,” Chad says. “At Mayo they truly have an understanding of this disease, what causes it and what effects it has on the body.”

Although there’s no cure for hemochromatosis, working with the care team at Mayo Clinic, Chad learned how to manage the disease in a way that has allowed him to resume his active life.

How long does it take to reduce fatigue symptoms after blood removal. I have been off work for almost two weeks have tests and still not positively diagnosed with Hemochromatosis. Even just getting up and walking around for ten minutes I feel like going back to bed. I do have type 2 diabetes, clinical depression, erectile dysfunction, low libido, but these last three weeks have been the worst I have felt and I cannot function properly at my job. Should I try and go to work and push through or is it better to stay at home and rest and do mild amount of walking until starting blood removal and fatigue alleviates as sometimes I feel like my body is beginning to shut down. Very concerning. Alec Walker, Perth, Western Australia.

Can you share the name of the app you use?

Is cirrhosis of the liver caused by hereditary hemochromatosis reversible ?

Is there a correlation with abnormal tongue sensations and hemochromotisis?

Thanks for your question. Unfortunately, we cannot diagnose conditions, provide second opinions or make specific treatment recommendations through this website. If you would like to seek help from Mayo Clinic, please call one of our appointment offices (Arizona: 480-301-1735 Florida: 904-953-0853 Minnesota: 507-284-2511) or visit https://www.mayoclinic.org/appointments.

My first hand experience started when I developed small blisters on my hands & feet.

Does the memory loss improve ?