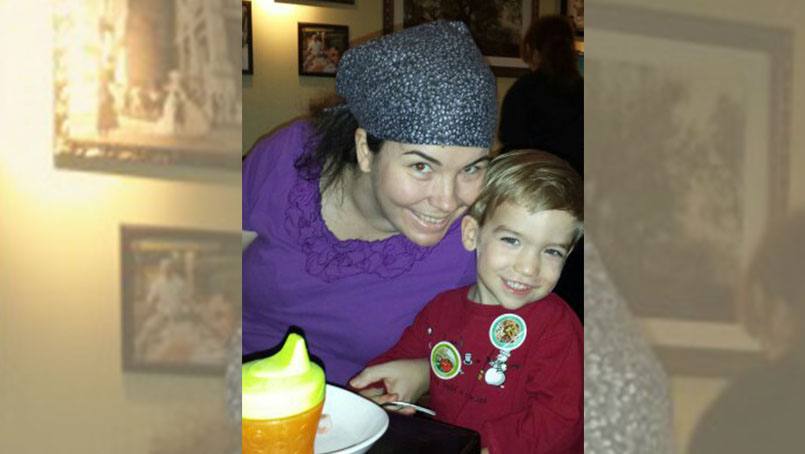 For much of her adolescent and adult life, Erica Laney, 31, had frequent petit mal seizures. Less often, she had grand mal seizures that led to loss of consciousness and violent muscle contractions. The cause of the seizures was abnormal electrical activity throughout her brain.

“The seizures started when I was 11 years old. I would experience three to four a month,” Erica says. “I was unable to talk during these auras and couldn’t remember anything afterwards. I felt like I was on a rollercoaster, and I was heading for the big drop. Then darkness came from behind me, enveloping me in a haze that would lead to a seizure.”

The Mims, Florida, native was diagnosed with seizure disorder and had a series of tests, including MRIs, CT scans, and electroencephalograms, or EEGs. Erica also went through intracarotid sodium amobarbital, or Wada, testing, which looks at language and memory on one side of the brain at a time. While under the care of an Orlando neurologist, Erica took several medications to control her seizures. But she was never fully seizure-free.

“I would take a medicine for a year and then we’d make a switch. All of my MRIs and CT scans would come out normal, so we never knew why I had these breakthrough seizures,” Erica says. “About 99 percent of the time I was still able to have a normal life.”

When Erica enrolled in college at the University of North Florida in Jacksonville, her seizures became more frequent. Erica says stress was one of the main triggers for her seizures. During her freshman year, she lost her dad and grandmother within six months of each other. Her seizures started happening weekly. She received a lot of “incompletes” in her classes and had to retake them the following semester. Despite that, she spent two more years at the university, trying to live as much of a normal life as possible.

Ultimately Erica decided to leave school at the end of her junior year after she completed her associate’s degree. She eventually transferred to a community college near her home, where she earned her nursing degree.

In July 2011, Erica moved back to Jacksonville to live with her fiancé. She got a job at a nursing home and then was hired as a hospice nurse. Unfortunately, the seizures continued and began interfering with her work. At one point, her future husband had to take her to and from work because she was no longer allowed to drive.

“Dr. Tatum and Dr. Wharen gave me hope. They were understanding and showed an expertise that made me confident in their ability to help my situation.”  — Erica Laney

Erica’s local neurologist recommended she be evaluated at Mayo Clinic to see whether alternative therapies were available to help control her seizures, or if surgery was an option. Erica made an appointment to see neurologist William Tatum, D.O., director of the Epilepsy Center and Epilepsy Monitoring Unit at Mayo Clinic’s Florida campus.

In January 2012, Erica completed a sleep study, but Dr. Tatum said she would need additional tests to see if she was a candidate for surgery. With her wedding and honeymoon just a few months away, Erica decided to delay further treatment. She wanted to focus on the joy of her upcoming nuptials.

Later that year Erica became pregnant and gave birth to son Andrew in 2013. Her life was going well. But when Andrew was a year old, Erica’s worst fear became a reality — she had a seizure while she was alone with him.

“I remember putting my son in his crib so he was safe and getting a hold of my husband,” Erica says.

Still, fear of the unknown kept her from moving forward.

“I was worried surgery would worsen my life rather than improve it,” she says.

Hoping for a better future

In 2015, Erica was watching the local news and saw an interview with Dr. Tatum. Coincidentally, around the same time, her neurologist had again suggested she go to Mayo Clinic. Worried about having further seizures while caring for her young son, she decided to make an appointment.

Erica met with Dr. Tatum for a second time in March 2015. He was determined to help her find a treatment plan to manage her epilepsy.

“Our goal at Mayo Clinic is to work with patients to help develop the best treatment plan for each individual,” he says. “For Erica, I recall that the uncertainty of when her seizures might arise had left her feeling depressed.”

Erica underwent extensive evaluations, including additional MRIs, PET scans, CT scans, and a Wada test, as well as continuous EEGs that monitored her seizures over the course of three to five days.

“These tests help us pinpoint a patient’s seizure focus and determine if they are a candidate for surgical intervention,” Dr. Tatum says. “Erica’s brain MRI was normal, and because of her particular situation, she required further investigation with intracranial electrodes that were placed around the language area of the brain to determine the site of seizure onset precisely.”

“Our goal at Mayo Clinic is to work with patients to help develop the best treatment plan for each individual."  — Dr. William Tatum

The approach was reassuring to Erica. “Dr. Tatum has a wonderful personality. He spends time with you and encourages questions,” she says.

Based on the results of her tests, Erica learned that she was indeed a candidate for surgery.

She met with Mayo Clinic neurosurgeon Robert Wharen, M.D., to discuss and learn about a temporal lobectomy. During the procedure, brain tissue in the temporal lobe is resected, or cut away, to remove the seizure focus.

When she first learned about the specifics of the surgery, Erica was nervous. But after doing some research and hearing firsthand from a friend who had a similar procedure, she finally felt confident moving forward.

“After looking at the risks involved, I realized that the benefits were substantial in comparison,” she says. “Both Dr. Tatum and Dr. Wharen gave me hope. They were understanding and showed an expertise that made me confident in their ability to help my situation.”

On Nov. 11, 2015, Erica had an open EEG to determine the part of her brain where her seizures were originating. A month later, Erica underwent the lobectomy procedure, where doctors removed a pea-sized portion of her brain. The surgery was a success. She spent three days in the hospital with only minor discomfort.

“We were fortunate to localize her seizures and successfully removed the area that contained the seizure focus,” Dr. Tatum says.

Today, Erica’s life is better than ever. It has been a year since she has had an aura or seizure, and even though she is still on medication, she is able to drive and enjoys the time she spends with her husband and son.

“It’s so freeing,” she says. “It brings tears to my eyes because I never thought I would be seizure-free.”

Erica is most grateful that her son will not have to witness his mom having a seizure.

“I haven’t lost anything in this experience. I have actually gained everything.” — Erica Laney

“My biggest fear was that at 5 years old, he would have to learn to call 911 when mommy was having a seizure,” she says. “One of the main motivations for having the surgery was not wanting him to get old enough to remember my seizures.”

Thanks to being seizure-free, Erica can now look forward to traveling and experiencing the world with her husband and son. This past September, she went on her first vacation with her family without experiencing a single aura or seizure.

“My life has been changed. The stress that my family has had to endure has disappeared,” Erica says. “I feel wonderful. I get to enjoy the simple things in life now.”

Erica says she is grateful to Dr. Tatum, Dr. Wharen and the entire Mayo Clinic team for their skills that allowed her to regain control of her life.

“I haven’t lost anything in this experience,” she says. “I have actually gained everything.”

What a great story. My son has gone through similar procedure at Mayo and it has really helped his life. I am happy for you and your family.
Ann B. Makena.

Upon reading your story, I couldn’t help but relate to you. I also had petit-mal seizures from the age of 14 to the age of 33. I also went through the study in London Ontario Canada, and was a candidate for the surgery. I had a Right-Lobectomy and had praised God and my miracle Doctor, Dr. Andrew Parrent for giving me my life back. I had been 20 years seizure free until recently (2016) when they started coming back mostly at night in my sleep. I am now going through having to be put back on meds for a security blanket. I truly believe this is hormonal related. About 1-2 months after the birth of both my boys (1984 & 1986), I went in to seizure after seizure, and they put me in the hospital and gave me a shot of valium to put my brain to rest, and they went away. The doctors said it was from my hormones changing back. Like I said since June 06/97 I was seizure free until 2016. I am now going through the change (53 years old) and they have returned, although nothing like before the surgery. I pray they will disappear again, as the stress of this situation doesn’t help, as stress causes seizures. I am posting this so that you watch for signs, especially when your menopausal years come to you. Hopefully you won’t go through this, but it’s worth mentioning. Take care, Kathy