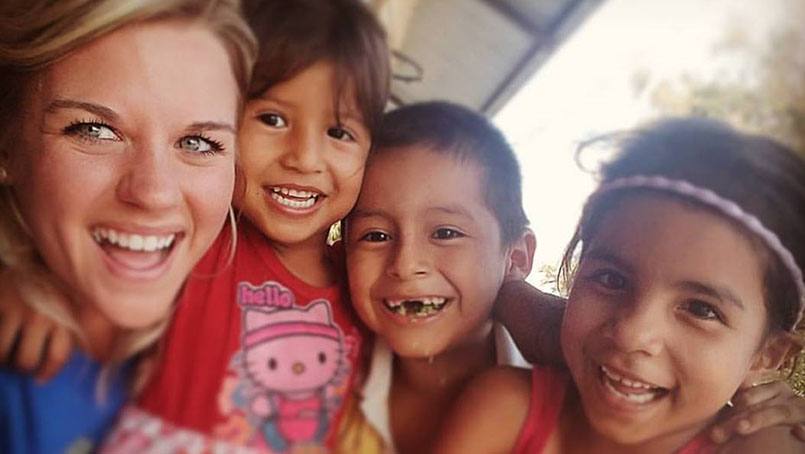 For years, Kallie Howerton and Kate Hudson had been listening to Kate Welp talk about the mission trips to Ecuador she organizes every year. The nurses work together on the Cardiovascular Surgery Progressive Care unit at Mayo Clinic Hospital — Rochester, Saint Marys Campus.

“My preceptor planted the seed,” says Howerton, who has worked at Mayo Clinic for three years. “She raved about the awesome trip experience she had with Kate [Welp], and, working with Kate, I realized that she’s awesome. I can learn from her.” 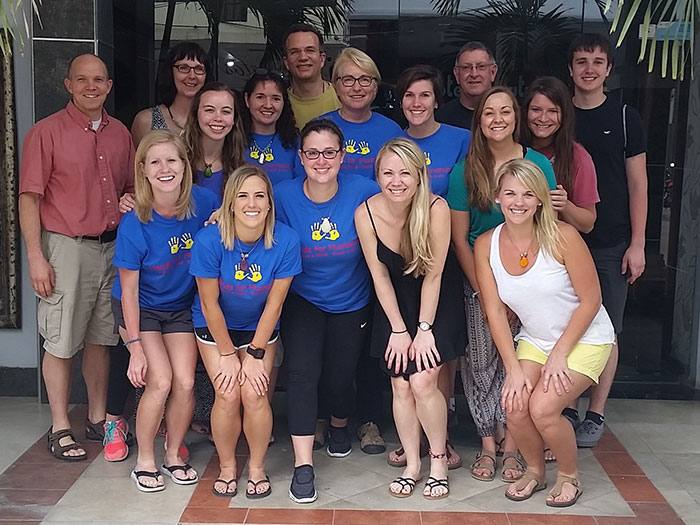 In partnership with the Fundación de Niños San Lucas (San Lucas Foundation) in Portoviejo, Dr. Stans, a pediatric orthopedic surgeon, repaired hips, legs and knees on about 20 children. The Mayo nurses were well-prepared to provide postoperative care, since their units serve pediatric as well as adult patients.

“I had never done a mission trip, and this was eye-opening,” Howerton says. “It’s a very different world than we live in. Being a nurse at Mayo, we work in a premier health care center of the world. Going from that to rural Ecuador where people just use what they have — it was definitely very emotional for us.” 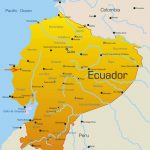 Portoviejo is in western Ecuador near the Pacific coast.

The trip provided growth and education beyond measure, Howerton says. The volunteers immersed themselves in Ecuadorean culture, enjoyed the cuisine, witnessed Ecuadorean health care, volunteered at a leprosy clinic, and spent time with children in an orphanage.

“Our interaction with the people there was what touched us the most,” Howerton says.

Hudson agrees. “I fell in love with the country, but the people — they were so welcoming, so thankful that we were there to help, and so grateful for everything we did.” She was so struck by the experience, Hudson says, that she already was talking to Welp about a return trip during the bumpy, four-hour bus ride to the airport for the flight home. They would return sooner than anyone could have predicted.

On April 16, just days after the group was safely back in Rochester, a catastrophic earthquake struck Ecuador, killing more than 650 people, injuring thousands, and leaving Portoviejo and other cities in shambles. They had to go back. 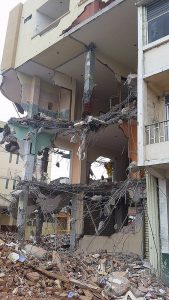 Portoviejo after the earthquake.

Again, using paid time off and paying their own airfare for the 10-hour flights, the nurses returned to Portoviejo. For six days in April, Howerton, Hudson and Welp worked in the shelters, distributed supplies donated by Mayo, passed out hygiene kits, checked on the orphanage, followed up on their patients, and helped where they could.

In the soup kitchen on her first day back, Howerton found the chef who had prepared meals at their hotel in March. “He started crying, overwhelmed with joy at seeing us from America,” Howerton says. “They just felt so isolated and alone in tackling the problems of the earthquake. But it was overwhelming for us, too, to be welcomed back like that.”

All around Portoviejo, buildings had crumbled into piles of rubble. The San Lucas Foundation, where the group performed surgery, had suffered severe structural damage. Many of the patients who received operations were living in tent cities — some in full body casts without access to medical care.

“When we went back, we saw vast destruction,” Howerton says. “But the Ecuadorian people were resilient and displayed this strength. They had nothing, and they were still finding ways to give to each other and to us.

“The attitude of the people is 180 degrees from what we deal with at home, where our patients expect to get the care they need,” she says. “In Ecuador, we are total strangers in their country, and they are so grateful, appreciative, kind and welcoming.”

How it all began

It is the people and their need that has drawn Kate Welp back to Ecuador several times a year for almost 18 years. Welp first went to Portoviejo to adopt a baby girl, her daughter Maya. The process took seven months, and, when the Rochester native returned home, she had a new appreciation for life in Minnesota. 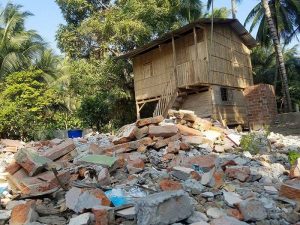 One of the temporary homes built with support from Hands of Humanity.

“I came home grateful to have our daughter, and for the green grass, and being able to turn on the faucet and drink the water,” Welp says. “In Rochester, we have access to food, schools, health care, dentists, safety. When I was first in Ecuador, times were tough. The banks were closing. There was garbage in the streets. Taxis were on strike, and there were riots. It was a tough time; yet, the people supported me. They were doing whatever they could to get my daughter and me home.”

Welp wanted to give back to this community that did so much for her and Maya. Through friends there, she made contact with the San Lucas Foundation and, after “a gazillion phone calls,” rounded up much-needed vaccine, syringes and supplies. “I flew down one day, spent two days working with the foundation to administer vaccines, and came home again,” Welp says. She figured her debt was paid, and she could go on with her life. That idea was short-lived.

“I quickly realized that I’d never be able to pay off that debt, and I decided to go back. And one trip led to another, and more people wanted to get involved,” Welp says. 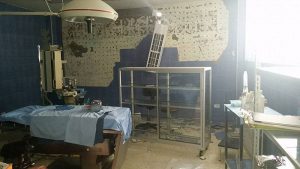 One of those people is Dr. Stans, who has been traveling to Portoviejo to provide pediatric orthopedic surgery for a dozen years — ever since he and his wife, Lena, read an article in the Rochester newspaper about Welp’s efforts in Ecuador. At the time, they were looking for an opportunity to volunteer outside the U.S. to introduce their three young children to other cultures and help them appreciate what they have at home. For the past 10 years, the Stans made annual family trips to Portoviejo, where Dr. Stans would operate on about 20 children a year while the family helped out in the local orphanage. Lena Stans accompanied the nurses in April on their visit after the earthquake.

The operating room set up by the San Lucas Foundation is simple, but sterile and safe, outfitted with operating tables, lights, anesthesia machines and other equipment largely recycled from Mayo Clinic, Dr. Stans says.

“The heartbreaking part when we go down there is that the local physicians have identified maybe 70 patients who might benefit from surgery,” Dr. Stans says. “For the first day and a half, I evaluate patients and identify about 20 or so who would be good candidates for surgery. We only offer it to patients who have high likelihood of success and low complication rates.

“That means we’re turning away 50 or so patients," he says. "Quite a few of them we’d be able to treat very well in Rochester, but they are too sick or have ongoing problems that don’t make this surgery feasible in Portoviejo. That’s the saddest part of the trip.”

Volunteers are grateful, too

Like many volunteers, Dr. Stans says, he feels he gets as much out of the experience as the people he helps. 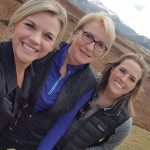 “It’s an opportunity that helps me put things in perspective and helps me see how fortunate we are here and how grateful I am for our life in Rochester and our facilities at Mayo,” Dr. Stans says.

Welp agrees. “It’s a very humbling experience. We are so blessed in the U.S., and then we go there, where there is so little, but there is so much love,” she says. “It’s definitely a win-win situation. We are all getting something out of this.”

In October, the three nurses returned to Portoviejo at their own expense to help equip five temporary homes that had been purchased with $22,000 donated since the earthquake. They enjoyed a housewarming of sorts, sharing a meal of fresh coconut water, mangos, chicken and rice with one family in their new home. For the orphanage, where the staff had been washing laundry for 50 children by hand since the earthquake, they bought two new washing machines. And they began assessing and planning for the next medical trip in spring 2017.

Eyes that melt your heart 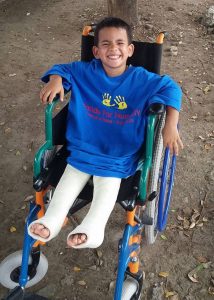 Gabriel had surgery on both knees in March.

On her most recent trip, Hudson says she was especially thrilled to see Gabriel, a 4-year-old who in March had surgery on both knees to straighten his legs and enable him to walk easily and without pain. Gabriel, in casts from his ankles to his belly button, spent days without shelter after the earthquake. When the group found him in April, he was feverish, and his casts were wet. Welp was able to steer the family to a hospital where the casts could be changed.

“He was in a wheelchair, and he was in rough shape,” Hudson says. “This time, it was totally different. He has big brown eyes that just melt your heart. He ran out the door when we came up to the house. He can run and play. He can do everything a normal kid can, where before he was very limited.”

Hudson says she has to adjust to the bounty in the U.S. every time she returns from Ecuador. “I’ve struggled coming from a place where they have so little and are so thankful for everything to being in the U.S., where patients have so many resources and maybe aren’t so appreciative,” Hudson says. 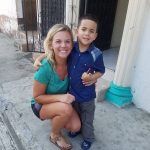 In October, Gabriel ran out to meet Kate Hudson, one of the nurses who cared for him.

But the experience also helps her be a better nurse, Hudson says. “Mayo sees a lot of people from other cultures, and this has really opened my eyes to realize, gosh, maybe they’ve never seen an electronic blood pressure cuff. This has changed me as a person. I can’t put my finger on it. I can’t explain what it is, but it’s opened my eyes to see the world differently.”

Ask Welp what drives her to continue supporting the people of Portoviejo, and she says, “The people down there have such a need, and we are so very blessed here. I have so many people supporting me. They give me confidence to do this work.

“I get a great deal of satisfaction out of being able to help others,” she says. “I love exposing other volunteers to Ecuador and the warm, Ecuadorian culture. I get a lot in return, too.”

Hi , I am a Dr from Ecuador , i am really interested in helping this year if you come back to Ecuador , let me know information about your trip and everything , thanks.