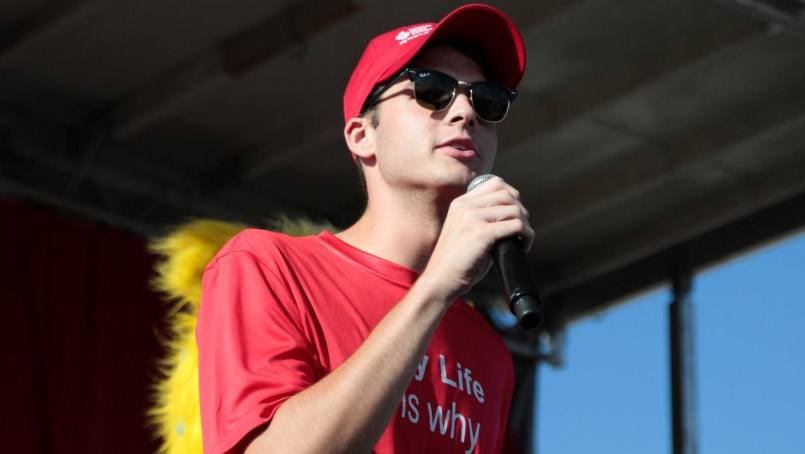 Growing up, Joe Meyer loved sports. In elementary school, he played basketball and baseball. The summer before he entered eighth grade, the Jacksonville, Florida, youth decided to give football a try.

Before he took to the gridiron, Joe visited his pediatrician for sports physical. At that appointment, his doctor noticed a heart murmur. Joe, then 14, couldn’t be cleared to play until he went to a cardiologist.

In August 2011, after seeing a pediatric cardiologist and having an echocardiogram and stress test, Joe was diagnosed with obstructive hypertrophic cardiomyopathy, or HCM — an incurable disease, usually caused by gene mutations, in which the heart muscle becomes abnormally thick.

The diagnosis took Joe away from sports and other physical activity for several years. But under the care of his medical team at Mayo Clinic, Joe is now active again, and he’s working to raise awareness of heart disease, particularly in children and teens.

“If I look back on the entire situation, I wouldn’t change anything,” Joe says. “It’s helped me find my passion and given me a voice to help others.”

Hypertrophic cardiomyopathy affects about 1 in 500 people — about 0.2 percent of the population. It tends to affect men and women equally. The symptoms may include shortness of breath, chest pain, palpitations, fatigue and passing out. A serious condition, the condition is a common cause of sudden cardiac arrest, especially young athletes.

“In Joe’s case the partition between the two bottom chambers was so thick that it caused obstruction within the heart cavity and impeded blood flow out of the heart,” says Mohamad Yamani, M.D., a cardiologist at Mayo Clinic’s Florida campus.

After the diagnosis, Joe was given medication to relax his heart muscle and decrease the obstruction within the cavity of his heart — and he was told not to participate in any sports.

“I know I’m getting the best care from the best group of people that I could possibly be getting.” – Joe Meyer

Once school started in the fall, Joe began having episodes of shortness of breath, chest pain and a racing heartbeat.

“My heart would pound like I had run a mile,” he says. “Most of the time it would happen in class, so we’d have to call the ambulance. This happened 20 to 30 times until the operation.”

That operation was a septal myectomy. In July 2014, after several six-month follow-up appointments, Joe's doctors recommended the surgery to remove the part of his heart that was causing thickness in the left ventricle. Joe missed the first quarter of his junior year, but he didn’t have any more episodes after the surgery.

In early 2015, Joe transitioned his all his medical care from his pediatrician to Mayo Clinic. Dr. Yamani and the team of congenital heart disease experts would work with Joe to help manage his condition as he entered adulthood.

Dr. Yamani expressed concern that Joe had become deconditioned because of lack of exercise, which was not ideal for a growing teen.

“He told me, ‘The one thing I don’t agree with is that you haven’t exercised since 2011 because those puberty years are so essential to building heart strength,’” Joe says. “I had the heart of a much older person because I had not exercised.”

Dr. Yamani told Joe it would take a long time to recondition his heart, but he wanted him to start walking a mile a day and regularly monitor his heart rate. He also adjusted Joe’s medication.

“[Dr. Yamani] is confident. He remembers everything about me,” Joe says. “I know I’m getting the best care from the best group of people that I could possibly be getting.”

“If I look back on the entire situation, I wouldn’t change anything. It’s helped me find my passion and given me a voice to help others.” – Joe Meyer

At 19, Joe now attends the University of North Florida, where he’s studying communications, and he enjoys spending time at the beach and going to the movies.

“He’s been doing very well. His heart function has been stable, which is very encouraging,” Dr. Yamani says. “The main limitation for him at present is that he cannot yet participate in competitive sport activities.”

Joe says he plans to add weight-training twice a week to his exercise routine in 2017 and hopes to do lots of traveling, including visiting Chicago and Seattle.

Joe’s journey from diagnosis to living with a serious heart condition at a young age has turned him into an advocate and spokesperson.

“People don't’ understand how quickly it can change your life,” he says.

In addition to volunteering, he has been interning with a local chapter of the American Heart Association.

“I want to spread awareness about the number one cause of death in the U.S.,” Joe says. “I’m very passionate about letting people know how important it is to get comprehensive sports physicals before participating in team sports. I feel like that saved my life.”

Joe also works on an initiative to get middle and high school students trained to do hands-only CPR. And he is helping the American Heart Association organize Jump Rope for Heart events at local elementary schools.

“The program gets kids excited about exercise and eating right, and gives them information to share with their families,” Joe says. “Heart disease can affect you at any age. The sooner you start eating healthy and exercising, the better the chance you can prevent it when you are older.”