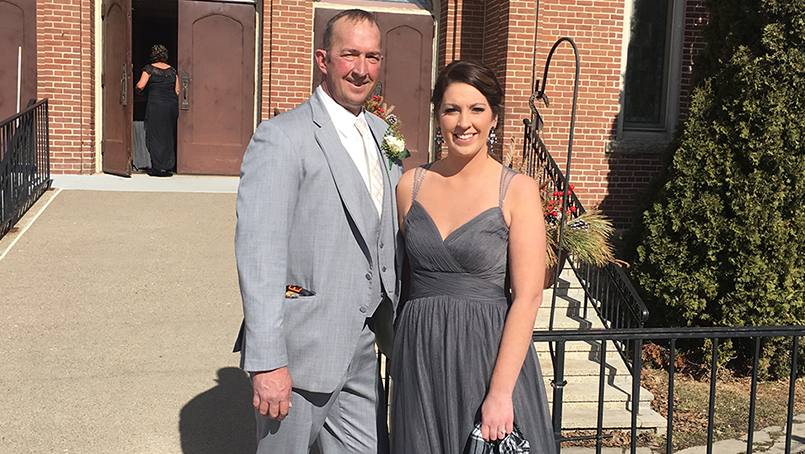 Morgan Burke spent years urging her father, Tony Burke, to make a doctor's appointment. When Tony was 12 years old, he had open-heart surgery at Mayo Clinic to repair aortic stenosis. But as an adult, the 48-year-old avoided most medical care.

"I'm just that type. I don't go to the doctor ever — unless I'm dead," says the farmer from Plainview, Minnesota.

Had Morgan taken no for an answer, that's exactly what Tony would be. But in June 2015, Morgan began working as a medical secretary in Mayo Clinic's Division of Cardiovascular Diseases. After a few months on the job, she persuaded her father to come to Mayo for an echocardiogram, along with an appointment to see a cardiologist.

That decision resulted in a life-saving discovery by Mayo Clinic physicians.

In the weeks leading up to Tony's visit to Mayo Clinic in March 2016, he tried to put the appointment off, Morgan says. But when the day finally arrived, Tony was ready to go.

He had lab tests, then an electrocardiogram, then the echocardiogram. The echo was done just down the hall from Morgan's office in the Gonda Building on Mayo Clinic's Rochester campus. Afterward, the plan was for Tony to call Morgan, and they'd get a cup of coffee together.

"I waited and waited for him to call and never heard anything," Morgan says.

"Right in that echo room, he told us this thing was over 10 centimeters, and they operate on anything over five. … They were concerned that if he overexerted himself at all, it would rupture."  — Morgan Burke

In the test room, Tony was feeling his own distress.

"The young kid who was doing the imaging walked out of the room, and a doctor came in," Tony says. "I said, 'Don't sugar coat it. Just tell me what's going on.'"

The cardiologist, Joseph Maalouf, M.D., told Tony and Morgan, who had joined him, that Tony had a large ascending aortic aneurysm.

"Right in that echo room, he told us this thing was over 10 centimeters, and they operate on anything over five," says Morgan. "They were talking about surgery the next day. They were concerned that if he overexerted himself at all, it would rupture. They literally wouldn't let him walk by himself."

After the conversation with Dr. Maalouf, Morgan and Tony went directly to Mayo Clinic Hospital — Rochester, where Tony was immediately admitted. Within an hour, Tony had a CT scan. Shortly thereafter, he was transferred to a bed in an intensive care unit.

Within minutes of Tony's arrival in intensive care, cardiovascular surgeon Alberto Pochettino, M.D., was in the room explaining the urgency and logistics of the surgery required to remove the aneurysm. The surgery had to be done the following day.

Although Tony and his wife, Brenda — who had joined her husband at the hospital — were anxious and scared of what was ahead, speaking to Dr. Pochettino allayed their fears. "Dr. Pochettino didn't seem too concerned," Tony says. "It sounded like it was just another job to him, and he said they were going to fix it."

Mayo Clinic cardiovascular surgeons typically operate every other day, and Dr. Pochettino was not due in the operating room on the day of Tony's surgery. Despite that, Dr. Pochettino told the family he would make an exception and do the operation himself.

"We couldn't believe he would do that for us," Morgan says. "We knew at that moment, we were with the best of the best."

Tony's surgery was Dr. Pochettino's first of the day. The family initially thought that it would take between four and six hours, but it lasted more than eight.

"We had phone calls every two hours in the waiting room, and Dr. Pochettino came to the waiting room once the surgery was done," Morgan says. "He said everything went well. He said there was no sign of stroke, but the aneurysm was bigger than they thought, measuring 11 centimeters in some dimensions."

Given the size of the aneurysm and the distortion it had caused in his heart, Tony's doctors were amazed at his lack of symptoms. They told the family that people with aneurysms as large as Tony's usually have significant back pain. That made sense to Morgan.

"Dr. Connolly is really great. I really like her. She explains everything to me so well. She's never in a rush."  — Tony Burke

"He's a farmer, so he typically has back pain," she says.

Following the aneurysm removal, Tony required several follow-up procedures. The morning after his operation, he began to bleed and needed an operation to stop it. A few days later, Tony's care team implanted a pacemaker. Following a six-day stint in intensive care, Tony was moved to a surgical floor to continue healing. Twelve days later, he was released from the hospital.

A change of heart

When Tony left the hospital, he departed with more than a healthy heart. He came away from his ordeal with a healthier attitude about taking care of himself. No longer afraid to complain about a minor ache or pain, Tony also is more accepting of going to medical appointments, including follow-up care with his Mayo Clinic cardiologist Heidi Connolly, M.D., who happens to be among the doctors Morgan assists in her job.

"Dr. Connolly is really great. I really like her," Tony says. "She explains everything to me so well. She's never in a rush. I had a few concerns with my pacemaker — it was in my shoulder, and it was causing pain — and she handled that great."

"I could've been gone, and it just makes me really think I'm lucky to be here." — Tony Burke

Tony's experience at Mayo Clinic also impressed upon him the value of slowing down and appreciating the here and now.

"I think I'm trying to enjoy things a little more now," Tony says. "I have a granddaughter that I'm really close to. I have two weddings, my son's and Morgan's, to go to in 2017. I could've been gone, and it just makes me really think I'm lucky to be here."

I practice Pain Management in Bakersfield, CA. I happened to see a patient (70 yr) with more than 10 yrs of back pain treated by multiple doctors with diagnosis of lumbar disc degeneration and arthritis (no MRI). On his first visit with me for exacerbation of his back pain, I happened to find severe sacroiliac arthritis with Lumbar disc degeneration. While patient is under fluoroscopy machine for SI Joint injection, I happened to observe very large Aortic Aneurysm and ended up having emergency surgery for leaking (may be just started) abdominal aneurysm surgery, whcih saved his life. Along with Mayo clinic’s story, this case also cautions us to keep this condition in mind during patient check ups for abdominal and back pain.

Having just had an aortic aneurysm repair am feeling good not having to have surgery that would lead to my healing over a long period of time; however said that wonder about long term restrictions was told that only must restrict my sitting over long periods of time; no heavy lifting or straining; but would love to get back to dancing and playing my instruments; how long should I wait to resume these activities;