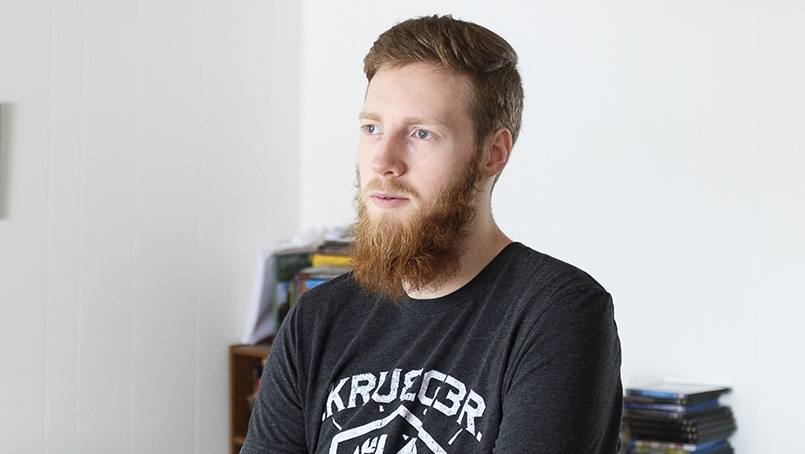 As much as she’d like to forget Sept. 15, 2016, it's a day Julie George will never be able to erase from her memory. That day, the Eau Claire, Wisconsin, woman’s 21-year-old son, Dylan Walling, was riding his motorcycle on a highway en route to his grandmother’s house when the unthinkable occurred.

A slow-moving manure spreader had caused a traffic backup. Dylan passed three cars and then collided with the farm vehicle as it began to turn left into a field. Although he was wearing a helmet, it wasn’t enough to protect him. The right side of Dylan’s body took the impact, leaving him seriously injured. His liver split in two. He had a kidney laceration, a head injury, a broken femur and forearm, an ankle injury and a collapsed lung. His foot was broken, his heel pad torn, and his toes were broken so badly they were almost severed.

“It was literally the worst day of my life,” Julie says, fighting back tears.

Dylan’s outlook was grim. But against the odds, over the course of the next several months, he was able to get on the road to recovery with help from a multidisciplinary Mayo Clinic care team that involved dozens of physicians.

Immediately after the crash, Dylan was transported by Mayo One helicopter to nearby Mayo Clinic Health System in Eau Claire, a Level II trauma center, where he remained for the next month. For the first 10 days of his hospital stay, Dylan was in a coma.

Doctors quickly assessed the severity of Dylan’s injuries and determined his probability of survival to be just 20 percent. His most life-threatening injury was to his liver. His care team sent him to the operating room within 14 minutes of his arrival at the hospital. That was just the beginning.

“Dylan had a total of 14 different surgical procedures over the course of about two weeks, most of them in the first couple of days,” says David Ciresi, M.D., a Mayo Clinic surgeon who was part of Dylan’s care team. “The initial one that we did was to open his abdomen up, in what we call a laparotomy, to control the bleeding from his liver.”

“It was because of the coordination of care and the multitude of different treatments that we have to offer that he survived and did as well as he did.”  — David Ciresi, M.D.

Dr. Ciresi performed three of Dylan’s surgeries — two on his abdomen and one on his trachea — and was one of 40 providers in a variety of disciplines to care for Dylan during his hospitalization. Dr. Ciresi doubts Dylan would have survived had he not come to a multidisciplinary trauma center.

“He would’ve been dead within an hour and a half,” Dr. Ciresi says. “It was because of the coordination of care and the multitude of different treatments that we have to offer that he survived and did as well as he did.”

Following his month-long critical care hospitalization at Mayo Clinic Health System in Eau Claire, Dylan spent three weeks in rehabilitation at another Eau Claire hospital. He continues to receive weekly physical and occupational therapy. According to his care team, Dylan has made steady progress and is expected to make a full recovery.

“I feel pretty good,” says Dylan, who remembers only a small portion of the day of his crash and only segments of his hospitalization. “I’m walking — not like normal — but I’m walking with very little pain.”

James Banich, M.D., a surgeon in Plastic and Reconstructive Surgery , was brought in for a consult early on, when it was still unknown whether Dylan’s right leg would need to be amputated. Doctors debated whether the limb could be salvaged or, in light of his infections, fever and other medical issues, the safest course was to remove it. They decided on surgery to preserve the leg.

“[The medical team was] completely amazing, and the nursing care that he received was phenomenal…They not only took care of Dylan, but they took care of the family.” — Julie George

Dr. Banich performed a two-step procedure in which he applied a skin substitute over Walling’s exposed bone and tendons to create a dermis or deeper layer of the skin. The substitute was covered by a silicone layer that stayed on for four weeks. After that, the wound had healed enough to put a skin graft over the area to further cover and repair it.

“He far exceeded any of our expectations,” Dr. Banich says. “He quickly went from someone who should not have survived to someone who not only survived, but is thriving. The function that he has in the limb that we saved is much better than I thought possible.”

Following Dylan’s progress has been incredibly rewarding, says Dr. Banich, who, over the months, has developed a good-natured rapport with his patient.

“As a physician, I try to individualize each patient’s care. Very early, I realized with Dylan that he had a great sense of humor, and he has a very involved mom who is incredibly devoted to getting him better,” Dr. Banich says. “I think that combo really assisted in getting him miraculous results.”

Julie marvels at how far her son has come. She says she’ll be forever thankful to his medical team.

“They were completely amazing, and the nursing care that he received was phenomenal," she says. "For how unbearable the situation was, they just made it so much easier to get through. They not only took care of Dylan, but they took care of the family.”