After a Liver Transplant, Financial Adviser Turns to Helping Others 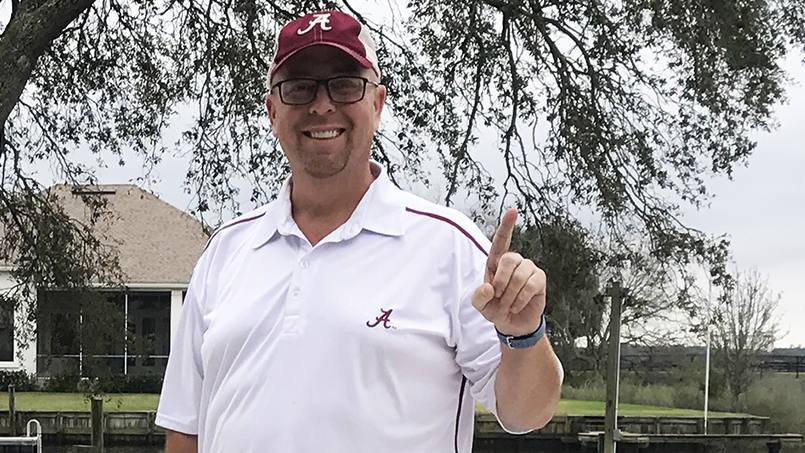 Owning a successful financial planning firm for 20 years taught Terrance McMahon to plan for the future and for the unexpected. On May 26, 2016, all those years of planning became critical for Terrance.

That day, heart palpitations sent him to a local hospital in Manchester, New Hampshire, where he lived. Although he thought he was having a heart attack, he admits later that he hadn't felt well for the previous six months.

"My eyes were bloodshot," Terrance says. "I was jaundiced, and I had bruises."

"The doctor said I could die that night," Terrance says. "I went from being on top of the world to being told, 'You might not make it.'"

But his care team was able to get Terrance's medical situation under control. He was prescribed a heavy dose of steroids and released from the hospital. A week later, Terrance went to see a local liver specialist who told him to come back in 90 days. With that timeline in mind, Terrance left for an African safari in late June. By the end of the trip, he knew something was seriously wrong.

"On the flight home my legs and stomach were very swollen," Terrance says.

In need of a new liver

When he got home, Terrance went to see his primary care physician who performed a paracentesis. During this procedure, fluid is removed from the lining of the abdomen, called the peritoneum. Approximately 13 pounds of fluid were extracted from Terrance's body.

Fluid can accumulate in the abdomen for a variety of reasons, including advanced liver disease, or cirrhosis, which was ultimately found to be the cause of Terrance's condition. After the paracentesis, the doctor put Terrance on a course of diuretics to help his body get rid of extra fluid.

In late October, Terrance met with a Boston-based liver specialist. Terrance was immediately admitted to the hospital due to a severely low level of sodium in his body. It was then that Terrance learned he would need a liver transplant, but it could be a long wait.

"I had a friend who said Mayo had saved his life. It's not a hospital. It's a life center." — Terrance McMahon

Terrance began researching his options and found Mayo Clinic. Mayo Clinic's Liver Transplant program performs more than 300 transplants each year at sites in Minnesota, Arizona and Florida. The week before Thanksgiving, Terrance flew to Mayo Clinic's Florida campus for an appointment at the Gary and Dianne McCalla Transplant Center.

"I had a friend who said Mayo had saved his life," Terrance says. "It's not a hospital. It's a life center."

"The median time to transplant at our center is four months, compared to 15 months nationally," says Andrew Keaveny, M.D., medical director of the Mayo Clinic Liver Transplant Program in Florida. "Patients like Terrance who have higher MELD scores are likely to be transplanted at Mayo Clinic in Florida more quickly."

A MELD score, or Model for End-Stage Liver Disease, is a statistical tool that gauges the survival probability of a patient with end-stage liver disease. It is used to help prioritize allocation of organs for transplants. MELD scores range from 6 to 40. The higher the score, the more dire the situation. Terrance's MELD score was greater than 30.

Hope in the new year

During his first appointment at Mayo Clinic, Terrance met with Sherry Harvey, one of the liver transplant coordinators.

"She made me feel comfortable right away," he says. "Sherry coached me through the whole program and checked in on me several times. Over the course of 40 days, I did all the tests to be approved to be in the transplant program."

"They're not just providing care. They become part of your wellness program. They're so concerned and compassionate." — Terrance McMahon

On New Year's Eve, Terrance was admitted to the hospital once again for dangerously low levels of sodium as a result of the cirrhosis.

"We stopped his diuretics to increase his sodium levels," Dr. Keaveny says.

Less than three weeks later, at 1 a.m. on Jan. 18, 2017, Terrance got the call. A liver had been found. Mayo Clinic surgeon C. Burcin Taner, M.D., performed the transplant the next day.

After the operation, Terrance met with dozens of Mayo Clinic staff members focused on maximizing his recovery. Nutritionists, pharmacists and aids, physical therapists, nurses, laboratory medicine technicians and social workers were all there to support and educate Terrance during and after recovery. He'd have to take immunosuppressive medications for the rest of his life and abstain from alcohol.

"They're not just providing care. They become part of your wellness program. They're so concerned and compassionate," Terrance says. "When you face your mortality, you have to release yourself to someone. And I got lucky choosing Mayo. When I look at the hospital building, it's symbolic of living to me."

Five days after his transplant, Terrance left the hospital with a new liver and a new outlook on life. Since then, he has started a nonprofit organization to help transplant patients find accommodations and support them through the pre- and post-transplant process.

"I have a lot of energy, and I'm doing something good for the world."

Terrance McMahon’s nonprofit is called the Mr. Shuttlesworth’s Foundation and its web page is http://www.mrshuttlesworth.com.

My husband iscearlt stage cerhossis. Family Dr stasted he needs endoscopy and colonoscopy and biopsy, he also tasked blood pressure meds, cholesterol and heartburn. Yet No one is calling us back, where and how fast cans I get my husband seen asap. Im stressed and worried also hid stomach is distended. Direction please, I'm not waiting for my gp to get around to makingv appts.

You might also consider looking into our Mayo Clinic Connect website (http://connect.mayoclinic.org), where you can communicate with and get advice from others who may have had similar experiences. Thank you.