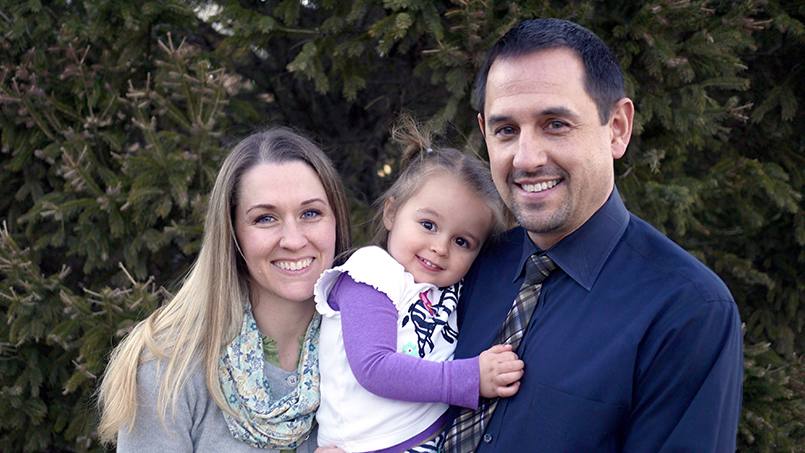 To the delight of everyone who knows 3-year-old Rayna Speary, her head is perfectly round and smooth and average size.

Given that the youngster was diagnosed and treated for an extremely rare brain tumor that caused her head to balloon in size as a 4-month-old, and that she underwent a dramatic surgery at Mayo Clinic to remove a substantial growth that occupied nearly half of her brain space, a perfect aesthetic of her head was not guaranteed. In fact, much about Rayna's development — including her very survival — wasn't assured.

In September 2014, doctors in the Departments of Neurology and Neurosurgery at Mayo Clinic's Rochester campus informed Rayna's parents, Wendy and Bob Speary of Oronoco, Minnesota, that their infant had developed a rare brain tumor called a desmoplastic infantile ganglioglioma, or DIG. Had it not been for the instincts of the resident pediatrician conducting Rayna's four-month well-baby exam and understanding of the condition by Rayna's pediatric neurosurgeon David  Daniels, M.D., Ph.D., Rayna's outcome could have been vastly different.

"She's kind of the benchmark case, as far as I'm aware," Wendy says. "There's not been a case that has had the results she has had."

When the tumor was identified and images were taken of Rayna's head, her care team discovered that a cerebrospinal fluid-filled sac filled nearly the entire space where the right half of her brain should be. Her brain tissue occupied a narrow sliver of space along the perimeter of her brain cavity.

"There was just a thin ribbon of brain pushed off to the side," Dr. Daniels says. "If you look at the scans, you say, 'How is that possible?'"

Before Rayna's diagnosis, she was a normal, happy baby. Having two older children, Wendy and Bob knew that children develop differently. So they weren't initially concerned when, at her well-baby checkup, Rayna's pediatrician from Mayo Clinic's Department of Community Pediatric and Adolescent Medicine told them her head had increased in size from the 50th percentile to the 100th percentile. The following day, however, the pediatrician's office called back requesting that the Spearys return for some imaging.

"One of the amazing things about this story, and one that we're really appreciative of, is that this resident took the time and went the extra step," Bob says. "Her attention to detail and value in placing the needs of our daughter first were some of the things that saved her life."

"One of the amazing things about this story, and one that we're really appreciative of, is that this resident took the time and went the extra step. Her attention to detail and value in placing the needs of our daughter first were some of the things that saved her life." — Bob Speary

Experienced in caring for children with uncommon brain tumors, Dr. Daniels was able to quickly diagnose Rayna's condition. The news that Rayna had an extremely rare brain tumor — according to Dr. Daniels, Mayo Clinic has recorded only six instances of it in the past 20 years — was followed by the alarming information that brain surgery was her only chance at survival.

"It was a lot to digest," Wendy says. "We were shocked and terrified. They were very honest with us with what to expect."

The rarity of the tumor makes it difficult to provide long-term results, says Dr. Daniels, who with his colleagues in the Division of Child and Adolescent Neurology, is in the process of publishing a report on a series of seven DIG patients.

"Half of these tumors occur in outer hemisphere, and the other half occur deep in the brain," Dr. Daniels says. "The kids where it occurs in the hemisphere do well."

In Rayna's case, the tumor was closer to the outside of her brain, making it easier for surgeons to get to. However, given the distortion her brain had suffered, it was unclear how her tissues would arrange themselves after the softball-sized growth was removed. That put her development moving forward in question.

In addition, it was possible that taking out the tumor would cause the infant's skull to sag inward, resulting in her head being misshapen after the surgery. There was also the possibility that Rayna would not survive.

As difficult as that was to consider, "we knew that Dr. Daniels had done this surgery before. He was familiar with these cases," Wendy says. "And we were at Mayo Clinic, and Mayo Clinic had the highest number of cases for this specific tumor. We're at the best place in the world, so that gave us confidence."

Bob adds that he'll never forget a conversation he and Wendy had with Dr. Daniels just prior to surgery.

"He said, 'Don't worry. I have kids, and we've been through hard times, too. I'm going to take care of Rayna just like she was one of my own.' I know he meant it."

"[Dr. Daniels] said, 'Don't worry. I have kids, and we've been through hard times, too. I'm going to take care of Rayna just like she was one of my own.' I know he meant it." — Bob Speary

Waiting out the surgery was the worst experience of their lives, says the Spearys. So when Dr. Daniels emerged from the operating room to report that he was able to completely take out the tumor, they were overjoyed.

Since the surgery, MRI images of Rayna's infant brain reveal that it has found its way back into its designated space and expanded to fill in the cavity.

"It's actually quite shocking," Bob says. "If you compare her post-surgery MRI with an MRI image from today, you would never believe it is the same brain."

While Raya continues to undergo yearly MRIs to monitor her brain development, there's little chance that the tumor will return.

"I think she got a surgical cure," Dr. Daniels says. "We just took it all out, and I don't think there is anything more to do."

When Rayna is older, her parents intend to explain what happened to her when she was an infant.

"It's an encouraging story," Wendy says. "It was scary, but it turned out really good. You just look at her and are reminded that life is fragile. You never know when it's going to change. We are so thankful for every moment we have with our kids."