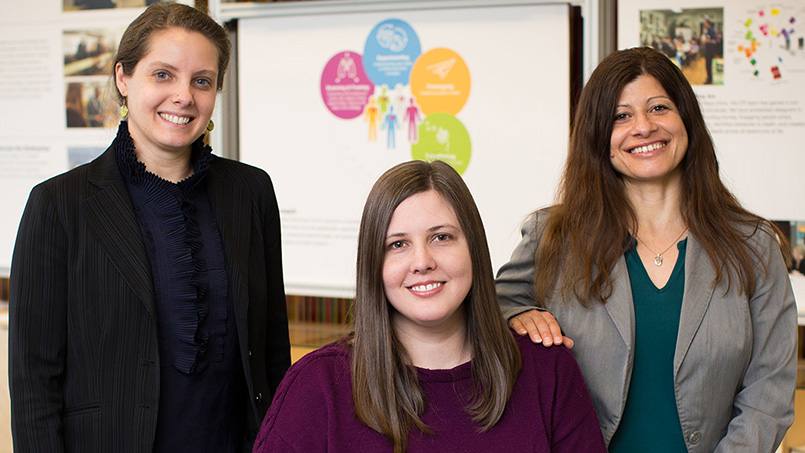 From left to right are Julia-Rose Anderson and Maren Mader — both of Center for Innovation — and Zulbiye Jorgensen, Center for Connected Care.

When Zulbiye Jorgensen, a project manager in Mayo Clinic's Center for Connected Care, began mentoring a team of Byron, Minnesota, high school girls in 2016 as part of the international Technovation Challenge, she asked the girls what careers they were considering.

"Every single one of them said they wanted to do something in medical," she says. "It's a no-brainer with Mayo Clinic right there."

But the girls' sights were set on different employment options by the end of the program. The challenge invites teams of middle and high school girls to identify a community need, develop a mobile app to meet that need, devise a business plan to launch the project, and create a video pitch. It had the intended effect of opening the students' eyes to opportunities in tech careers.

"One of the four decided she was going to be doing something in design, and the other girls said, 'Wait a minute, I could actually have my own business and develop a product, and make an impact in the community,'" Jorgensen says. The team she mentored, which included her daughter, Maia Jorgensen, calls itself Volunteerium.

Brenna Hartman, one of Volunteerium's members and a junior in high school, says she had always been determined to follow her parents' path and become a physician. But after participating in the Technovation Challenge, during which she and her teammates created an app that connects volunteers seeking opportunities with organizations that need help, Hartman is considering other possibilities.

"I've been thinking about careers where I could tie in both health care and this type of computer engineering to become a biomedical engineer," says Hartman, who knew nothing about computer science prior to Technovation.

"We're trying to catch girls in middle school and high school, while they are still receptive, to show them they're good at this." — Virginia McCright

Opening the girls' minds to their potential in computer and technology-based fields is the aim of the challenge, which was established in 2010 and gives teams the chance to compete to win a $10,000 award to fund their product. This year, 16 Mayo Clinic staff members are mentoring Rochester-area teams through the challenge, which runs through the end of July and requires a time commitment of more than 50 hours.

"We're trying to catch girls in middle school and high school, while they are still receptive, to show them they're good at this," says Virginia McCright, who works in Mayo Clinic's Department of Information Technology. She helped bring the program to Mayo Clinic three years ago. "Computer science is a good career, and there are so many girls walking away from it."

"In school in my first programming class, I was the only girl, and that was in 2003," says Technovation mentor Maren Mader, who works in Mayo Clinic's Center for Innovation as an analyst/programmer. "When I first started my career, it really felt that being young and female meant you had to prove yourself a little more. It took a lot of confidence to stand up for myself, which I didn't have at first."

According to Technovation, 26 percent of its participants who go to college major in computer science, which is 65 times higher than the national rate of freshmen college women majoring in computer science. Working alongside teams of girls, mentors help change perceptions that computer science lacks creativity or is better suited for boys.

"I think it comes down to showing the girls that they can have some empowerment and some control in the world." — Julia-Rose Anderson

"There has never been a point where women were not capable, but there's a question of desire and motivation and confidence," Mader says. "I almost didn't go into this field, because I didn't think it would be very rewarding. I thought it was just going to be data entry, which isn't something I have a passion for. I didn't realize how much creativity, how much problem-solving, and how many puzzles there were. I think Technovation is trying to show people that."

The program helps girls understand that if they can't solve a problem, it's OK to try again or try something completely different, says Mader, who mentored a team of high school and middle school students in 2016.

Technovation emphasizes that the girls come up with ideas for their projects, which spurs their creativity, says Technovation mentor Julia-Rose Anderson of Mayo's Center for Innovation. "The girls own their projects, and it's really about helping them figure out how to find the solution themselves rather than showing them the answer or doing it for them."

For the mentors, it's not always easy to let the girls solve their own problems.

"The toughest part for me was to not tell them what they needed to do, but to guide them to the solution," says Jorgensen. "And a lot of times, it wasn't the way I would have done it, so that was surprising."

Witnessing this growth in the girls, say the mentors, is one of the highlights of their involvement in Technovation.

"The thing that has continued to stick out and has hooked me on the program is to see their confidence grow and the reaction on their faces when they put their first piece of code together and activate it on their mobile device," says Anderson, who has been involved with Technovation for three years. "I think it comes down to showing the girls that they can have some empowerment and some control in the world."

"It's a lot of hard work, and you have to be dedicated, but the payoff is amazing." — Brenna Hartman

That sense of purpose has inspired the members of Jorgensen's team to take their product, which, like their team name, is called Volunteerium, beyond the scope of the challenge and begin marketing it in the community. Although the Volunteerium app is not available commercially yet, team members hope to secure investors and begin offering the product sometime in 2017.

"The girls had never even played with the idea that they could build an app," says Jorgensen. "But they not only came up with an idea, they had to touch technology to build something and had to get out into the community to sell that idea and take the criticism."

Jorgensen says these are experiences that no classroom setting can duplicate yet are vital to success in the real world.

"It's a lot of hard work, and you have to be dedicated, but the payoff is amazing," Hartman says. "It has prepared me to graduate high school and go on to college, and to really push myself to better the community and hopefully extend our app to better the world."