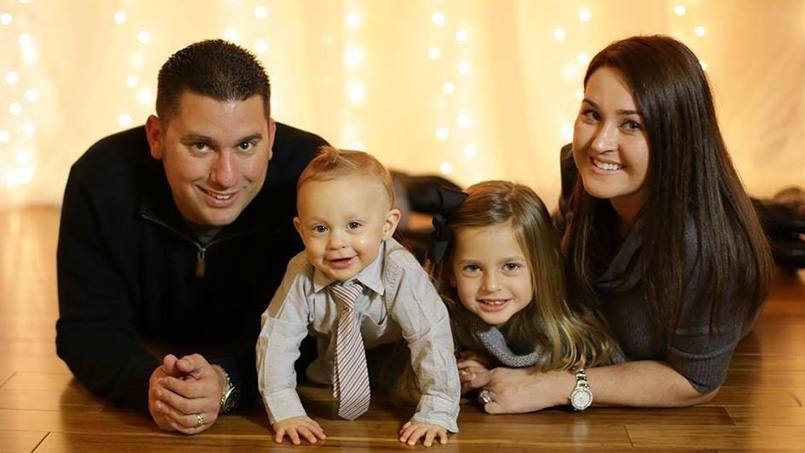 A Mayo Clinic oncology nurse, Nicole Barlanti knew how tough cancer could be. What she didn’t know was that she’d have to face it firsthand, while she was still in her 20s. Here's Nicole's story, in her own words.

Before that day, I was a wife, a mother, an oncology nurse — things I was proud of and worked hard at being. I aimed to be the best version of myself that I could be every day.

My daughter Haylei was 4. My second child, a son, Landon was only 8 weeks old. I'd known my husband Justin since 2001, and the life we had been dreaming of since we were teenagers was becoming a reality.

But life tends to knock things out of focus sometimes.

As I prepared to go back to work after my maternity leave after Landon's birth, I had several episodes of nausea and vomiting, and severe headaches. Numerous doctor visits and several scans later, I learned I had a brain tumor. The irony was not lost of me as the oncology nurse who had spent the last five years caring for cancer patients at Mayo Clinic hospital in Florida.

Sadly, no one could tell me what type of tumor I had until I went into surgery. So in I went on that Thursday. After an eight-hour operation, I waited anxiously for the pathology report to come back. What was the tumor that had been found in my brain?

I remember when the neurosurgeon walked in with a number of other staff around him.

Dr. Ron Reimer would be the bearer of the news that I had a new title, a title that would change our lives forever. At that moment, I became Nicole Barlanti, glioblastoma (stage 4 brain cancer) patient. All of my other titles had to take a back seat as I — and my family and friends — began this new battle. There was never another option.

In the process of deciding on a treatment plan, we were bombarded with options for treatment from all over the country. But because I was an oncology nurse at Mayo Clinic, I felt privileged to know both ends of the care given at Mayo. So there was really no question of where I was going to be treated. It was going to be a very tough road ahead. I knew I wanted my colleagues standing behind me along with my family. It takes an army to battle this, and mine was looking pretty strong.

That isn't to say I always felt empowered. After my surgery — and as my treatment began — I spent hours every day studying things like shapes and colors, and learning how to use my phone again. I had to learn how to write my name at the same time my 4-year-old was across from me learning how to write hers. Chemo and radiation were so tough on my body, especially when my mind no longer could do what it used to be able to. But the drugs and treatment couldn't break my spirit and drive, and the strength behind it. It was tough, almost unbearable at times, but I was not broken. I would fight on.

"It was going to be a very tough road ahead. I knew I wanted my colleagues standing behind me along with my family. It takes an army to battle this, and mine was looking pretty strong." — Nicole Barlanti

Looking back, though, if it weren't for the staff at the clinic, my colleagues, my doctors, all the care providers, I would have never gotten through some of my journey.

As I think about the journey that began that April day, I can't believe it's now four years later. My son is 4 and playing third base in tee ball. My daughter is 8 and in Girl Scouts. This year my husband and I will celebrate 10 years of marriage. I have completed two Gate River Run events.

"I am back at Mayo Clinic working part-time, doing what I love. Only now it takes the role beyond simply doing the work or wanting to help. I have been in my patients' shoes and know how it feels." — Nicole Barlanti

More importantly, I am able to support my family in any way needed.

I am back at Mayo Clinic working part-time, doing what I love. Only now it takes the role beyond simply doing the work or wanting to help. I have been in my patients' shoes and know how it feels. I talk to people who are newly diagnosed or want to meet and talk. I can see their hands tighten around their loved ones when the terms are used. I see that polite smile, but underneath I know there is a cry for help or advice. When I explain to them that they will have good days and bad days, or how important a support system is, when I tell them that they must always fight, no matter what, I'm not sitting there as a nurse, mother or wife. I am sharing my story after four years because I have yet another title now.

Today I share my story or encourage people because I am now "Nicole Barlanti, brain cancer survivor!" It is a title I will proudly wear for the rest of my life, thanks to my family, friends and Mayo Clinic.

Watch this video to learn more about Nicole's story: