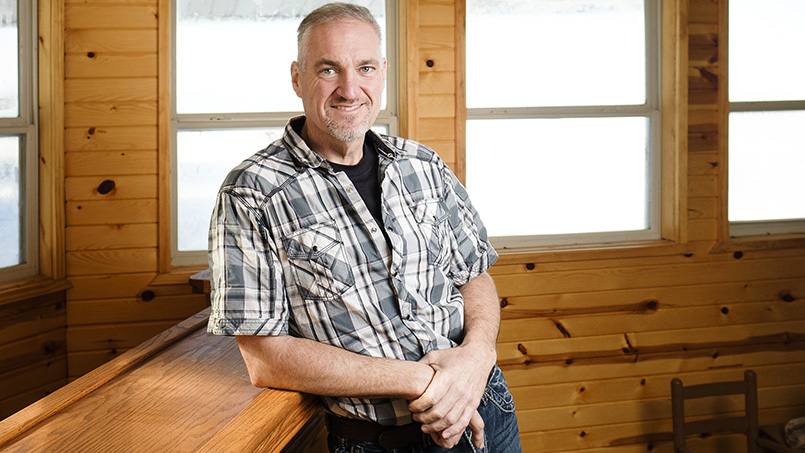 Carrying extra pounds was taking a big financial toll on Scott Decker, of Bloomer, Wisconsin, and the excess weight was on track to cost him a lot more.

"I was spending $1,500 a month on insulin," Scott says. "I had type 2 diabetes, sleep apnea, high blood pressure, joint pain and fibromyalgia."

At 48, Scott says he knew his mounting health problems could shorten his life. He tried multiple diets without lasting success, and he realized he had to make a change. Scott reached out to Mayo Clinic Health System to explore the possibility of bariatric surgery.

"My mother passed away at 68 from diabetes," he says. "I didn't want to be 50 years old and another statistic."

For his evaluation, Scott saw David Ciresi, M.D., a bariatric surgeon at Mayo Clinic Health System in Eau Claire, Wisconsin. Dr. Ciresi found that Scott met the requirements for bariatric surgery established by the National Institutes of Health, which include having a body mass index of 40 or greater, or 35 with obesity-related medical conditions, such as diabetes, high blood pressure or sleep apnea. Just as important, though, was Scott's readiness to do the work required to succeed in his weight loss.

"You're not doing a patient any favors by performing bariatric surgery if they're not prepared to adopt all of the lifestyle changes needed to be successful," Dr. Ciresi says.

"You're not doing a patient any favors by performing bariatric surgery if they're not prepared to adopt all of the lifestyle changes needed to be successful." — David Ciresi, M.D.

To help him get ready, Scott went through a six-month evaluation and education process before the surgery. Then, in February 2016, Scott underwent Roux-en-Y gastric bypass — a minimally invasive, laparoscopic procedure. It involved stapling off the top of the stomach, leaving a pouch about the size of an egg, and then bypassing the first three feet of the small intestine to reduce the calories absorbed as food is digested.

Scott says the results after surgery were dramatic. He lost 130 pounds, most within the first six months, and has now reached his goal weight of 195. As his ailments and need for medication dropped away, his efforts began to pay off, literally.

"The first month, I put $1,500 in my savings," says Scott, who owns and operates his own machine shop. He and his wife of 26 years, Rhonda, raised two sons and recently took temporary placement of two younger relatives. The extra money has been a big help to the small-business owner and family man.

His improved health also has led to a greater enjoyment of life. Scott, an avid outdoorsman, says he used to worry that a low blood sugar incident out in the woods might be the end of him. But while deer hunting last fall, his hunting buddy was the one having trouble keeping up.

"It's amazing how much weight actually changes your health. This has been life-changing. I would do it again tomorrow." — Scott Decker

These days, Scott finds he sometimes has to introduce himself to people he has known for years, as they often don't recognize him due to his weight loss. And he appreciates the simple pleasure of buying a pair of average-sized jeans off the rack. But it was the potential health benefits that originally inspired him to have bariatric surgery, and seeing them become reality, that has been the big payoff.

"It's amazing how much weight actually changes your health," Scott says. "This has been life-changing. I would do it again tomorrow."