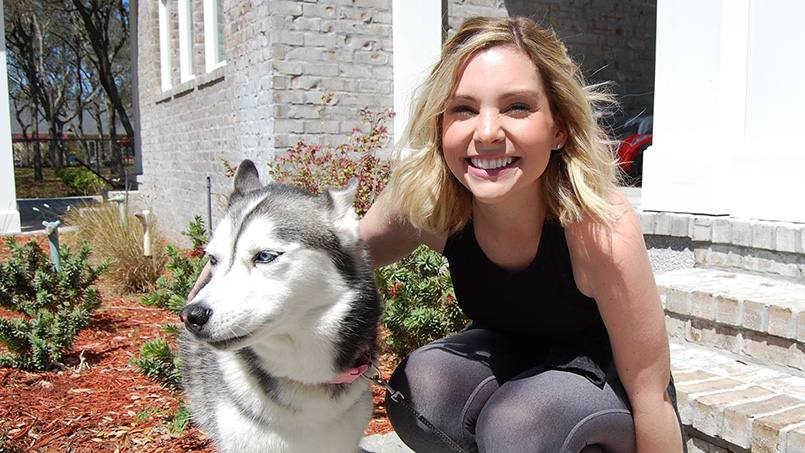 Despite repeated treatment, Taylor Overby's colon cancer kept coming back. Then the 25-year-old's care team at Mayo Clinic offered her a unique surgical option, and that has made a world of difference.

It's been almost four years since Taylor Overby began her tenacious battle with metastatic colon cancer when she was just 21 years old. Despite treatment, the cancer kept coming back.

After trying other options, Taylor and her Mayo Clinic care team decided to try an aggressive and complex surgery called hyperthermic intraperitoneal chemotherapy, or HIPEC. Since that surgery, the Jacksonville, Florida, native is looking forward to a brighter future.

In December 2013, Taylor, then a senior at Florida State University in Tallahassee, began experiencing continuous stomach pain and vomiting. A CT scan at a local hospital revealed a tumor in her colon. Looking back, Taylor says she'd had abdominal cramping and constipation on and off for six months. But the diagnosis of colon cancer was a shock.

Because her bowel was so obstructed, Taylor underwent a procedure in which surgeons removed the right side of her colon, along with the tumor and several lymph nodes. Doctors told Taylor she would need chemotherapy to make sure the cancer was gone.

"I went home back to Jacksonville," Taylor says. "The plan was to go to Mayo Clinic for chemo because of its reputation."

As 2014 began, Taylor started six months of chemotherapy at Mayo Clinic's Florida campus. She felt good afterward. But unfortunately, less than a year later, an MRI revealed a mass on her right ovary. The colon cancer had spread. Surgery to remove the ovary occurred in July 2015. After that, Taylor began more chemotherapy to get rid of any microscopic cancer cells that may have remained.

Through it all, Taylor continued her education, pursuing an MBA at the University of North Florida in Jacksonville.

"It was the most natural next step after already getting a business-related undergrad degree," she says. "I kept going to classes and finished in August of 2016. It kept my mind off of everything else."

Taylor hoped she would be able to move on to the next stage of her life — finding full-time employment. But less than six months later, the cancer returned again, this time in the peritoneum, or lining, of the stomach.

"Colon cancer is often branded as an 'older person's disease.' But I'm hopeful that through advocacy that can be changed, and more people will understand that colon cancer can happen at any age." — Taylor Overby

Through a series of genetic tests, Taylor's care team ruled out the possibility of a genetic cause for her cancer. Mayo Clinic oncologist Pashtoon Kasi, M.D., recommended another four months of chemo, but he began considering other options, too.

"Cancer in the young is increasingly being recognized," Dr. Kasi says. "Looking at data within Mayo Clinic, our rates of seeing young patients have increased several fold, and a lot of other national studies are corroborating these observations."

True to Mayo's model of multidisciplinary care, Taylor's case was reviewed by a group of physician experts in colon cancer, including several surgeons.

"Because of our approach to care, we have a better understanding of the disease and the options to treat people like Taylor," says Mayo Clinic surgical oncologist Sanjay Bagaria, M.D.

An opportunity for a cure

The team felt Taylor would be a good candidate for HIPEC surgery. The procedure involves the removal of all visible cancerous tumors from the abdominal cavity and then bathes the abdomen with hot chemotherapy — heated to 108 degrees Fahrenheit — to kill any microscopic cancer cells.

The technique is used primarily for cancers that have spread through the lining of the abdomen, such as appendix, colon, stomach and ovarian cancers. Mayo Clinic is one of the leaders in the surgery and one of only a few centers in the southeast that perform the complicated procedure.

"Her disease was limited, so I felt like we could get all the cancer out," Dr. Bagaria says. "The goal was to take a very aggressive approach and go for the cure."

"Her disease was limited, so I felt like we could get all the cancer out. The goal was to take a very aggressive approach and go for the cure." — Sanjay Bagaria, M.D.

Taylor underwent the eight-hour procedure in January 2017, and doctors were pleased with her outcome. She will continue to have scans and follow-up visits with Dr. Kasi every few months for the next year.

While she's eager to start enjoying her 20s, Taylor is actively using her experience to educate others. She's a member of a young survivors group known as the Colon Club. The group aims to raise awareness about the risks and symptoms for colon cancer, promote screening and provide support and encouragement. Last year, Taylor attended a Fight Colorectal Cancer Call on Congress in Washington, D.C., with several of the group's members to advocate for more access to colon cancer screening.

"I am passionate about earlier colonoscopy screenings," Taylor says. "Colon cancer is often branded as an 'older person's disease.' But I'm hopeful that through advocacy that can be changed, and more people will understand that colon cancer can happen at any age."

I do agree! thx for the info!

Hey, I wanted to ask you a few questions about your HIPEC procedure. Was this procedure painful? Did you have any complications after surgery? And How long was your recovery period??

This is one of my options of treatment, and I saw your story posted, so I thought I would ask. How have you been doing since your procedure?
Thank you for help, Amy

I found the site for the group mentioned in this article. It’s just the words colonclub followed by dot com. Maybe you can contact her through that site’s message boards or contact information. I might also consider contacting the Mayo Clinic directly to address your questions, or try to contact this woman and/or her survivors’ organization on social media. I hope that you find the answers you’re looking for and the treatment you need!