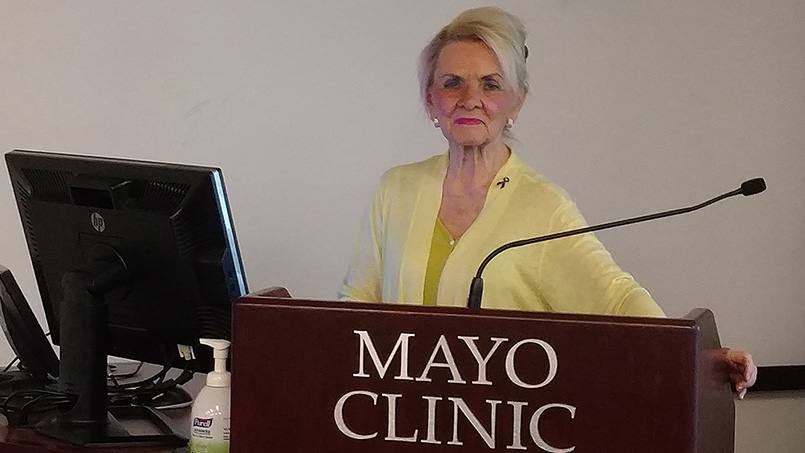 Esophageal cancer can be deadly if it's not caught early. Fortunately for Mary Helen Duggar, her Mayo Clinic doctors found her cancer when it could still be treated. Today she's working to help others learn more about the disease.

It's been more than a decade since Missouri native Mary Helen Duggar received the news that she had esophageal cancer. This often-deadly form of cancer affects about 17,000 people each year in the United States, and it has a five-year survival rate of less than 20 percent.

Mary Helen was diagnosed in 2006. In February 2017, doctors surgically removed her esophagus — the tube that connects the throat to the stomach — and the upper part of her stomach during a procedure called an esophagectomy at Mayo Clinic's Florida campus.

As she began her recovery after surgery, which included learning to eat all over again, Mary Helen wanted to find others who had been through a similar experience.

"It took me two months before I could connect with others who had had these same surgeries," she says. "It's not like having your appendix out."

Today, Mary Helen, now 82, works to create awareness about esophageal cancer and a closely related condition called Barrett's esophagus — a pre-cancerous change in the lining of the lower esophagus. She leads a support group that meets quarterly at Mayo Clinic and visits with people after they've had surgery. In addition, when she and her husband travel, she frequently shares her story.

At risk from reflux

In 1988, Mary Helen started having severe heartburn and went to see a gastroenterologist in Arkansas, where she lived at the time. The doctor prescribed medication for acid reflux. And Mary Helen took that medication regularly for the next 20 years.

"It eased my heartburn, but it did not go away completely," she says.

Although Mary Helen didn't realize it at the time, her condition wasn't just uncomfortable, it was putting her at risk for bigger health concerns. Acid reflux is a significant risk factor for esophageal cancer.

"Dr. Wolfsen is always very thorough, very professional. He's very honest, and he discussed with me all the available treatment options. But I just wanted to get those cancer cells out of there." — Mary Helen Duggar

When the Duggars relocated to Florida in 2006, the retired high school media specialist had a checkup at Mayo Clinic. Gastroenterologist Herbert Wolfsen, M.D., performed an endoscopy. It revealed that Mary Helen had Barrett's esophagus and, in some areas, Barrett's adenocarcinoma, the most common type of esophageal cancer.

"While the vast majority of Barrett's patients never develop cancer, unfortunately, in Mary Helen's case, the Barrett's had progressed into cancer cells that invaded the deeper layers of the esophagus wall," Dr. Wolfsen says.

Mayo Clinic is one of the few centers in the nation that offer all of the available treatments for esophageal cancer. Mary Helen met with a team of experts, including oncologist Elizabeth Johnson, M.D., and now-retired thoracic surgeon John Odell, M.D., to review her treatment options. She chose surgery.

"Dr. Wolfsen is always very thorough, very professional. He's very honest, and he discussed with me all the available treatment options. But I just wanted to get those cancer cells out of there," she says. "They took out 19 lymph nodes during my surgery, and they were all clear. I'm one of the lucky ones."

Until recently, it was unusual to detect early stage cancer that had developed from Barrett's esophagus, as was the case with Mary Helen.

"The aim is for us to identify cancers at much earlier stages and hopefully prevent the cancer before it even develops." — Michael Wallace, M.D.

"Most patients were diagnosed at advanced stages when treatment options are very limited and long-term survival rates are grim," Dr. Wolfsen says.

Research advances, however, have led to improvements in diagnosis and care. Dr. Wolfsen, along with fellow gastroenterologist Michael Wallace, M.D., is currently conducting several clinical trials focused on early detection of cancerous and pre-cancerous cells in patients with Barrett's esophagus.

"This type of cancer is usually detected late because we don't have a good screening method that's universally applied to patients who are at high risk for developing and esophageal cancer," Dr. Wallace says.

"The aim is for us to identify cancers at much earlier stages and hopefully prevent the cancer before it even develops," Dr. Wallace says.

Mary Helen has regular endoscopy examinations to confirm there's no recurrence of the Barrett's esophagus. She also takes medication to ensure her acid reflux is well controlled. She's happy to be able to see her grandchildren and great-grandchildren grow up, and grateful to the doctors who gave her that opportunity.

"Mayo saved my life," she says. "I wouldn't think of going anywhere else."

Thank you so much for sharing! My brother is fighting stage 3 EC. He had surgery 2 weeks ago to do an esophagectomy which was unsuccessful as it had fused to the trachea. Would you have any recommendations on who he should receive. A Sevond opinion from? Thank you!

Thank you for sharing your story. My husband was diagnosed with Barrett’s Esophagus in 2011. The protocol at that time was a follow up endoscopy in 3 years. Exactly 3 years later, the next endoscopy showed cancer cells. In November, 2014 he had his esophagus removed and was diagnosed with stage 1A cancer with a good prognosis. There was no protocol for chemo or radiation at that time. 15 months later, the cancer returned in a nearby area and radiation and chemo were given. Now we go every 5 months or so for scans to see if he is clear of cancer.
We know of a few men who have had this surgery and 3 years later are doing ok. I understand that this type of cancer is on the rise and I admire your work to seek out patients and help them through this. It is one of the most invasive surgeries and recovery is hell. Having someone to be a sounding board is so important. Wishing you the very best on your continuing recovery journey.

Thank you for that article. I just found out I have Barrett’s esophagus. If I didn’t have an ulcer I never would have known. They did an endoscopy to see if ulcer healed and found this. Apparently I have silent reflux disease which caused my ulcer and now the Barrett’s. This site has educated me tremendously. Thank you so much.

My brother just had Esophagectomy Surgery in Mach, He had is feeding tube removed on 4/1 and was doing really good eating small meals every 2 hours. Now, in the last week he is gagging and throwing up some after he eats. I think now its just in his head that he will throw up. Anyone have any suggestion or advise on this? Thanks

Editor’s Note:
Thank you for writing. Unfortunately, we cannot diagnose conditions, provide second opinions or make specific treatment recommendations through this website. If you would like to seek help from Mayo Clinic, please call one of our appointment offices (Arizona: 480-301-1735 Florida: 904-953-0853 Minnesota: 507-284-2511) or visit https://www.mayoclinic.org/appointments.