A Leak in His Brain, Troubling Symptoms, and Finally an Elusive Fix 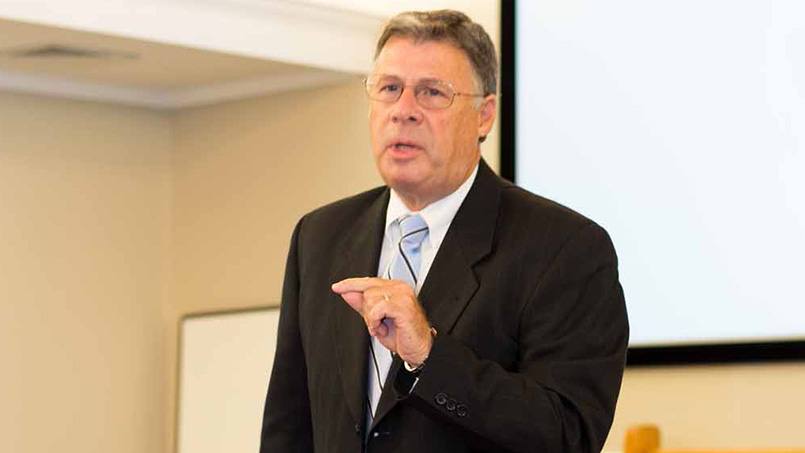 Steve Grinstead was eager to resolve a medical condition causing troubling symptoms. Physicians around the country turned him down for surgery. His team at Mayo Clinic found a solution that put him on the road to recovery.

Steve Grinstead knows how to handle dangerous situations. For more than 20 years, the Winnabow, North Carolina, resident has led crime prevention seminars through a nonprofit organization he founded. So when he was facing a different type of threat — a health scare that left him with a constellation of troubling symptoms — it's no surprise that he confronted it head on.

"First, I lost my sense of smell. Then, my sense of taste," Steve says of the symptoms that surfaced in 2012.

His hearing and balance were the next to be affected. The symptoms got progressively worse and would eventually lead him to a local neurologist, then to a specialist at a nearby university health system, where he was diagnosed with superficial siderosis. The rare, complex condition is caused by iron deposits in the brain and spinal cord. In Steve's case, doctors suspected the iron deposits were a result of a cerebrospinal fluid leak.

"I had a hole in my dura," he explains, referring to one of the membranes surrounding the brain and spinal cord. "Spinal fluid was leaking out and blood was leaking in."

When something leaks, you fix it. At least that's what Steve thought. But as he began investigating treatment options, he discovered not everyone agreed on that approach. He visited a number of major medical centers around the country. None was willing to perform the surgery that would repair the leak. While surgery would not reverse the effects Steve was already experiencing, without a repair, his symptoms were likely to continue to get worse.  Then, he scheduled an appointment at Mayo Clinic's Rochester campus.

"Mayo Clinic was my last resort," Steve says, adding good naturedly that he "really did not want to go to Minnesota in February."

"Mayo had the expertise to solve the problem. I requested that they operate right away … I was shocked and pleasantly surprised that they honored that request." — Steve Grinstead

In spite of his weather-related reservations, he headed north. He met with a team that included neurologist Neeraj Kumar, M.D., neuroradiologist Felix Diehn, M.D., and neurosurgeons David Piepgras, M.D., and Richard Marsh, M.D. After a series of tests — including one called an ultrafast dynamic CT myelogram — the team discovered that the site of the leak in Steve's spine was at a different level than previously suspected. They offered to perform the surgery necessary to stop the leak.

"Mayo had the expertise to solve the problem," Steve says. "I requested that they operate right away, so I wouldn't have to fly home and back to Minnesota again. I was shocked and pleasantly surprised that they honored that request."

They honored another request, as well.

"I'm a Jehovah's Witness, so I can't take blood transfusions," he says. "Mayo was really good about listening to me and respecting that."

Going above and beyond

Dr. Marsh performed Steve's four-hour surgery. The team found a 5/16-inch diameter leak, which was stitched up with silk thread.

The team that performed the procedure and cared for him afterward, Steve recalls, went above and beyond to make him comfortable.

"Dr. Marsh was excellent. He was very humane, considerate and compassionate," Steve says. "He showed great concern about me and had an excellent bedside manner. The nursing staff was absolutely superb, too."

"Going to Mayo Clinic turned out to be the best decision of my life. Mayo is my new favorite hospital." — Steve Grinstead

Less than a week after surgery, Steve left the hospital. He stayed in Rochester a few more days for monitoring, then flew home to North Carolina. Back home, Steve attends physical therapy twice a week to help him regain strength and improve his balance.

"Some of the damage cannot be reversed," he says. "But my balance should get better over time."

He's eager for that to happen, and for other parts of his life to get back in balance, too. "This affected my business, and I'm hoping to get back to work soon," he says.

While most of his follow-up care will take place close to home, Steve made a trip back to Minnesota for one final checkup at Mayo Clinic this spring. And while he no doubt found the weather more appealing, he's grateful he made his winter visit.

"Going to Mayo Clinic turned out to be the best decision of my life," he says. "Mayo is my new favorite hospital."