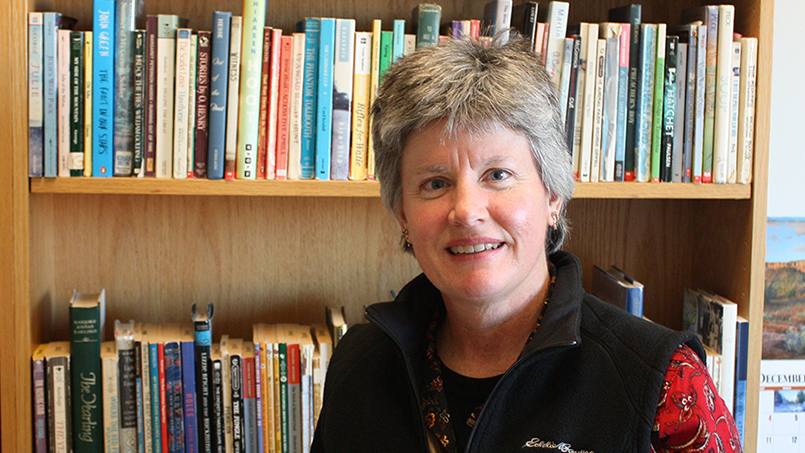 Throughout surgery, chemotherapy and radiation therapy for breast cancer, Polly Browne knew she could rely on the expertise of her multidisciplinary health care team at Mayo Clinic Health System in Mankato.

Polly Browne didn't have any obvious symptoms. But the North Mankato, Minnesota, resident and elementary education college professor, knew something wasn't quite right with one of her breasts.

An otherwise healthy 54-year-old who not long before had received a normal mammography report, Polly decided she needed to see her primary care provider, Susan Laabs, M.D., a family medicine physician with Mayo Clinic Health System in Mankato. Following a conversation and exam, Dr. Laabs recommended Browne undergo another mammogram and a biopsy.

The test results revealed two tumors. It was breast cancer. Browne was understandably apprehensive. Despite those feelings, though, she was confident in her health care team.

"The Mayo name gave me comfort, peace of mind and security that I was in the best hands," she says.

The next step was a treatment plan. Polly first met with surgeon Tara Krosch, M.D., to discuss surgery to remove the tumors.

"Dr. Krosch was incredible," Polly says. "She sat down with me and explained what we were going to talk about. She wrote things down, drew things and described everything sequentially."

Polly also expressed appreciation that Dr. Krosch was engaged with her on a personal level and often called her by name, even in the operating room.

"It's really important to be treated as a person and not just a patient," Polly says.

"The Mayo name gave me comfort, peace of mind and security that I was in the best hands." — Polly Browne

Surgery to remove the tumors took place Nov. 10, 2015, with Dr. Krosch. Breast reconstruction immediately followed, with Albert Harris, M.D., a plastic and reconstructive surgeon. Dr. Harris and his team employed a unique approach to this surgery in Polly's case. Instead of the standard technique that places the implant under the muscle, Dr. Harris — with input from his colleagues at Mayo Clinic's Rochester campus — placed the implant above the muscle, a move that reduced Polly's recovery time.

"Man that was slick," says Polly, confirming that she recovered quickly. She was able to resume her normal physical activities within a couple of weeks, with minimal discomfort and no complications.

Once the surgeries were complete, Polly knew she still had an uphill battle involving chemotherapy and radiation therapy. Medical oncologist Stephan Thomé, M.D., took the lead in planning Polly's chemotherapy treatments, involving her every step of the way.

"I always felt like I was in really good hands," Polly says of Dr. Thomé. "He always referenced results and followed protocols based on sound scientific research with which he was very familiar. He communicated well and was very thorough."

"I always felt like I was in really good hands." — Polly Browne

"I met with Dr. Owens, and we had a conversation about the purpose of radiation and what would happen during my treatment," Polly says. "He used a lot of analogies to explain things and talked about my faith and how it's so important to my recovery."

During chemotherapy treatments at the Andreas Cancer Center at Mayo Clinic Health System in Mankato, Polly felt confident in the nurses' skills and comforted by their personal attention. When she rang the bell to signal her final day of treatment, the entire staff came out and applauded.

"I'm sure they do that for everyone, but that day it felt like it was just for me," Polly says. "It was powerful and touching."

Now, more than a year later, Polly is in remission and recently wrapped up the final phase of her breast reconstruction. She's seen significant health improvements, including an intentional 11-pound weight loss.

Polly credits much of her ongoing recovery to the Livestrong program at the YMCA in Mankato, which helped launch her increased focus on overall fitness. The health and fitness program is designed for chemotherapy patients, recovering cancer patients and cancer survivors. Now an alum of the program, Polly stays active, regularly lifting weights, walking, and playing pickleball, golf and softball.

"I love 'The needs of the patient come first.' That motto was adhered to by everyone who took care of me." — Polly Browne

Polly lauds the Mayo Clinic expertise available in Mankato throughout her journey, and says the health care system lived up to its primary value.

"I love 'The needs of the patient come first.' That motto was adhered to by everyone who took care of me," she says. "I've had the most tremendous team of medical professionals working with me. This Mayo system is exceptional."