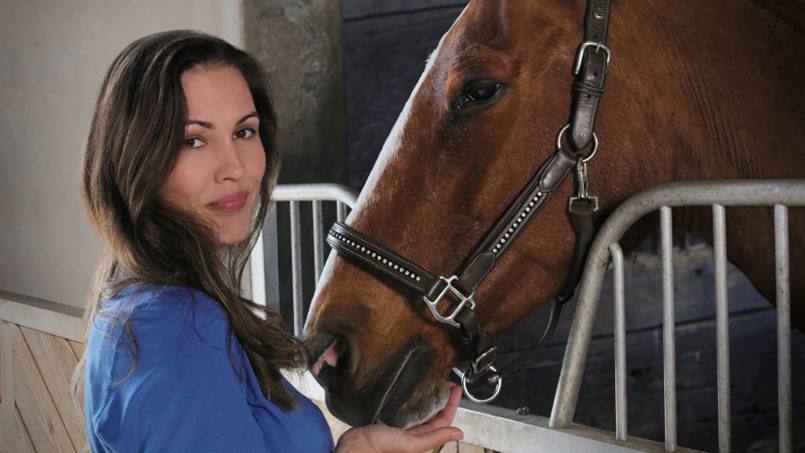 Distressed by the news that she had an inoperable brain tumor, Jessica Kenser sought a second opinion and received life-altering treatment from Mayo Clinic neurosurgeons.

December 2016 brought an end to an eight-day period in Jessica Kenser's life that was bookended by events both devastating and astounding. That span of days began with the news that she had an inoperable brain tumor. It ended with that tumor being completely removed by Mayo Clinic neurosurgeons. Throughout the long week in between, there were many moments Jessica credits for the stunning change of events.

The first came just two days after Jessica, who is a nurse, learned she had a brain tumor deemed too deep to remove. While she was doing online coursework for a doctorate of nursing degree, an advertisement for Mayo Clinic appeared on her monitor. The ad spurred her to action.

Jessica called Mayo Clinic's Rochester campus to request an appointment. She received the welcome news that she could get appointments the next day with physicians in Mayo Clinic's Department of Neurology and Division of Neuro-oncology.

"Talk about by the grace of God," says Jessica, who, with her husband, left her home in Brooklyn Park, Minnesota, immediately after that phone call and spent the night in Rochester to be ready for her 7:30 a.m. meetings.

Another life-changing moment arrived when her Mayo Clinic neurosurgeon Terry Burns, M.D., Ph.D., informed Jessica that her tumor could, in fact, be removed, and the tumor's location actually made surgery a promising treatment option. On Dec. 30, just two days after meeting a team of Mayo Clinic neurosurgeons, Jessica underwent surgery. The tumor, a low-grade noncancerous growth called a pilocytic astrocytoma, and its surrounding tissues were successfully removed.

Six months later, not only has Jessica recovered with minimal side effects, but she says the experience has deepened her faith and an increased her desire to spread goodness in the world.

"Had I not sought another opinion, eventually this tumor would've changed into a higher grade and grown enough to cause permanent damage, and it could've killed me," Jessica says. "God literally answered all my prayers. I prayed that my tumor would be operable, that it would be low grade and that I would be healed."

Jessica discovered she had a mass in her brain in May 2014. An MRI, ordered by a primary care physician who was concerned about symptoms Jessica had experienced, found a 10 millimeter spot in her right temporal lobe. That's the part of the brain responsible for processing and integrating memories with the senses of sight, sound, taste and touch.

Because the spot did not feature signs of having its own blood supply, her neurologist told her it was likely scar tissue.

"I said, 'Wait. Is there a possibility that it's a tumor of some sort? Let's just get it out!'" Jessica recalls. "But he said nobody would even attempt that because of where it's located deep in the temporal lobe. He said, 'We'll monitor it.'"

Accepting her physician's advice to monitor the mass, Jessica underwent twice-yearly MRIs to check the growth. For two and half years, Jessica's brain mass showed no change. But in late 2016, a test revealed that the growth had developed a blood supply. Terrified of what the change could mean, Jessica demanded to know if it was cancer.

"Had I not sought another opinion, eventually this tumor would've changed into a higher grade and grown enough to cause permanent damage." — Jessica Kenser

"My doctor said, 'No, we'll just monitor it a little closer now,"' Jessica recalls. "And I said, 'I want this out of my head.'"

Her physician's response: "No one will touch it."

Devastated by the news, but lacking another option, Jessica began praying, and she immersed herself in her work — until she saw the words 'Mayo Clinic' flash across her computer screen.

"Of course I've heard of Mayo Clinic, but I'm not from Minnesota. I'm from California," Jessica says. "So when the ad went on my screen, I was like, 'Mayo Clinic's here!' I literally called down to Mayo right then. They got me appointments with my neurosurgeon and my neuro-oncologist 12 hours after I called."

When Jessica arrived at Mayo Clinic, she didn't know — and her physicians, including neuro-oncologist Brian O'Neill, M.D., couldn't tell using the MRI scans alone — the type of tumor that had taken up residence in her brain. But Jessica's team was confident they could remove it, and they wasted no time proceeding to treatment.

"I was there on a Wednesday, and Dr. Burns said, 'How about Friday morning?' I was in surgery less than 48 hours later. That's unheard of."

Despite her savvy in the health care field, Jessica had never required surgery and admits being unnerved by what was before her.

"I've always been extremely compassionate, but I've never been the patient before. I didn't fully get how real that fear is," she says, adding that her nurses took extra care to allay her worries.

"The nurses down there were phenomenal," she says. "When I first talked to Dr. Burns, I was just a wreck, and I was crying. His nurse Lucinda cried with me and held my hand."

"I was there on a Wednesday, and Dr. Burns said, 'How about Friday morning?' I was in surgery less than 48 hours later. That's unheard of." — Jessica Kenser

The nurse who wheeled her to surgery was equally comforting and soothed Jessica throughout the trip to the operating room.

After nearly seven hours in the operating room, Jessica's tumor and much of the surrounding tissues were removed. When Jessica woke up, her thoughts immediately went to the code word she and her husband had chosen to indicate she was OK.

"I remember going into surgery. I remember waking up," she says. "I have zero lapse in memory."

Less than 48 hours after waking, Jessica was discharged from the hospital. Eleven days after that, she resumed her studies. Over the course of the next few months, she achieved three As and one B, and completed 150 hours of clinical work. In February, as soon as her driving restriction was lifted, Jessica returned to her job working with patients in need of respiratory therapy.

There were some difficulties along the way, though. Jessica says she struggled with anxiety and fear immediately after her operation. And although she could previously remember her many professional and familial obligations, she must now write things down to keep her busy schedule organized. But on the whole, Jessica says she feels her life has shifted for the better as a result of her ordeal.

"My husband asked me if I could go back and not have the brain tumor, would I? And I honestly can't answer that because my faith and appreciation for life is so different," she says. "My outlook on life is that I am blessed to be sitting in traffic. I'm blessed to be here. The little stuff does matter, and every day I wake up with a positive attitude. My whole goal is to make someone happy today."

So happy that everything worked out this way, Jessica! Will ALWAYS be so grateful and thankful for the care that you provided to BOTH me and Cody when we were all at Bethesda.❤

i too had what was deemed an inoperable brain tumor it was a birth defect .and i had always suffered from sever headaches and one day at work and i suddenly got a searing sharp pain in my head my vision went double . luckily there is a mayo clinic in jacksonville fl. so after meeting with several neurologists at local hospital i mad an appt at mayo fl. where it determined that i had was a very large AVM behind my right eye . it was growing into the frontal lobe of my brain interfering with my 3rd 5th and 6th cranial nerves and was so large it was pushing my right eye up and out of socket . i met with several amazing doctors but then i had the incredible luck of meeting Dr Ricardo Hanel . he had a true gift from God , and he thinks out of the box . i had two procedures both experimental that had never been done before . his P.A. told me she had never seen an OR so crowded . he told me the second procedure would be much more difficult and painful . i should've paid better attention to that part .but after a difficult recovery of several months with my wonderful wife i was deemed ready to rejoin the world again .i am so grateful for the people at the mayo clinic . it is a very unique place ,when you walk in and begin interacting with the people who work there from DR'S nurses technicians support staff the cafe down to the folks watering the plants that everyone has the same goal to make your stay there as comfortable and short as possible