For Jim Heinl, Fighting Cancer is a Team Effort 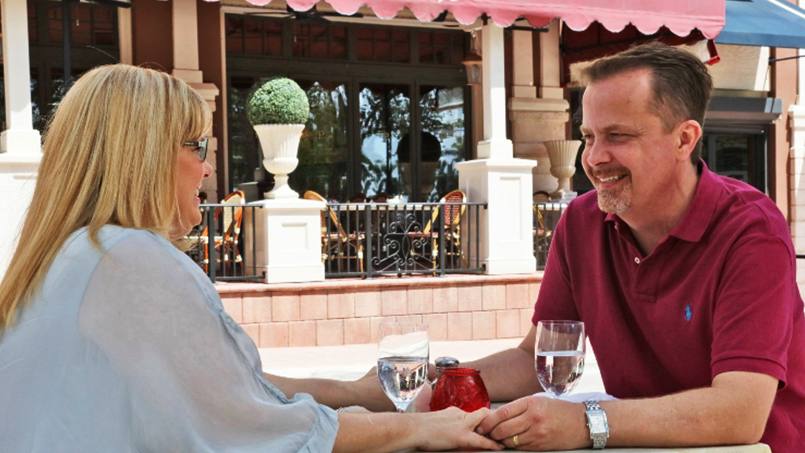 With his wife by his side and a team of experts at Mayo Clinic to help him through, Jim Heinl faced down a cancer recurrence and then went back to a life focused on family.

First diagnosed at age 16, Jim Heinl knows full well what it's like to be forced to deal with cancer. But he's never had to face it alone. Jim's high school sweetheart and wife of 26 years, Tami, has been by his side through it all. And, when the cancer came back decades later, Jim had a team of specialists at Mayo Clinic to depend on, too.

"When your life's at stake, that's where you want to be," Jim says. "That's where everyone is fighting for you."

In 1985, Jim learned he had a rare form of liver cancer called fibrolamellar hepatoma. Treatment involved removing two-thirds of his liver.  But that wasn't enough. The disease returned four years later, and the recurrence required Jim to undergo a liver transplant.

For 25 years after that, all was well. Jim graduated from college in 1990, and he and Tami were married in 1991. Over the next nine years, the couple welcomed four children to their family. They were the center of Jim's world.

"My favorite thing to do is spend time with my wife and kids," he says. "I love making them laugh and hearing them laugh."

"Mayo Clinic was absolutely incredible about making sure that they were not only listening to Jim, but listening to me as well, knowing we were a team." — Tami Heinl

But in 2014, Jim's medical situation took a scary turn. Scans revealed several spots on his left lung, as well as a mass in his pancreas. Jim's physician at Mayo Clinic's Arizona campus, Thomas Byrne, M.D., in the Department of Gastroenterology and Hepatology, decided to take a closer look, and he wanted to get his colleagues involved, too. Dr. Byrne brought Jim's case to a Mayo Clinic tumor board where experts discuss complex cases to determine the best approach for each patient. In Jim's case, the group agreed surgery would be best.

On Oct. 30, 2014, Jim underwent surgery to remove four areas of cancer that had been identified in his pancreas and lung. Afterward, follow-up testing showed no signs of cancer, and none have appeared since then.

Looking back on the experience at Mayo Clinic, Tami is grateful not only for the care Jim received, but for his caregivers' willingness to include her in the process.

"Mayo Clinic was absolutely incredible about making sure that they were not only listening to Jim, but listening to me as well, knowing we were a team," she says. "I love how everyone there has so much energy, so much passion and so much knowledge. They walk into the room, and you are their main focus."

Although he continues to have regular checkups to make sure he remains cancer-free, today the disease is no longer front and center in Jim's life. Instead, he’s back to spending time with and traveling with his family. Jim’s also returned to having fun with his hobbies, including playing billiards, enjoying family game night, listening to music and rooting for his favorite college football team — the Ohio State Buckeyes.

You can hear more about Jim's story in the following video:

Very proud to have Jim Heinl as my nephew and his family as my family. He is the most positive role model I know. He lights up any room he enters. He’s a wonderful husband, father, son, brother, nephew, friend, and above all, fighter. He’s back at Mayo, this time a cancer is at his first vertebrae. Y’all please say a prayer for this awesome human being to get through his next operation, with his family by his side, for those great folks at Mayo, and for Jim to get well soon. Hugs and love from Unk.