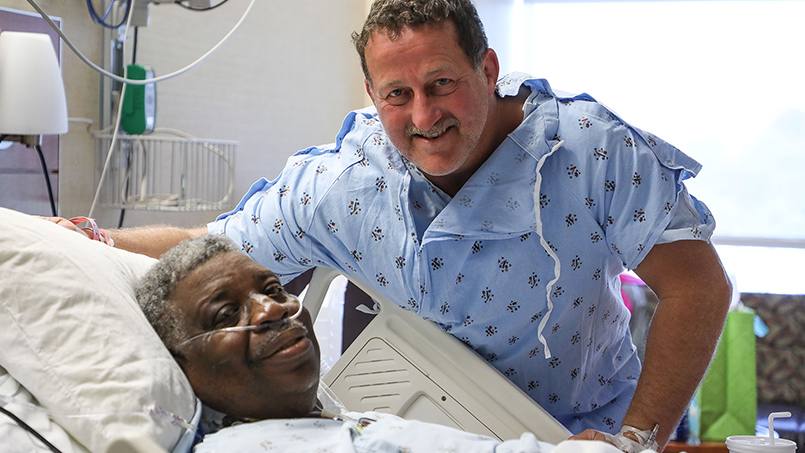 When John Branson struck up a conversation with Edgar Roberts, the two had no way of knowing their chance meeting would motivate John to become Edgar's kidney donor. But that's exactly what happened. Today, Edgar is enjoying renewed health, thanks to John's generosity.

John Branson has saved many a life during his 28 years as a police officer in Anderson, Indiana. And while the lieutenant has performed CPR on several people and stopped a man from jumping off a bridge, he had no idea that a casual conversation while on vacation would become a life-saving encounter.

On April 21, 2016, John was vacationing in Georgia and stopped in a restaurant for dinner. His son was about to graduate from the U.S. Naval Academy, so when John saw an older gentleman wearing a Marine Corps cap, he decided to say hello.

That man was Edgar Roberts, a Vietnam veteran turned pastor from Valdosta, Georgia. The two men talked about Edgar's service in Vietnam. Then the conversation turned to his health. Edgar had lost both kidneys to diabetes, and he had been on dialysis for six years. He'd been waiting for a kidney transplant for two years.

"We got to sharing, and I told him about my many years on dialysis," Edgar says. "He asked me what my blood type was. It turned out we had the same blood type,"

John picked up the breakfast bill, and Edgar recalls, "After he paid, he told me 'I'll give you my kidney.' I was shocked, hoping this was real."

Seeing the benefits of living donation

"I was overjoyed and thanking God for putting John in my life. I was ready to give up before meeting him." — Edgar Roberts

Dr. Mai says that living-donor surgery has also increased with the development of laparoscopic removal of the kidney — a technique that makes recovery quicker for the kidney donor.

At the end of their conversation in the restaurant, Edgar and John exchanged phone numbers. Over the next few months, they spoke regularly. After a call in January 2017, John knew his friend wasn't doing well. He began the process to see if he was a match for Edgar. A few weeks later, John got the news that he was an eligible donor.

"I was overjoyed and thanking God for putting John in my life. I was ready to give up before meeting him," Edgar says of learning his new friend could donate a kidney to him.

"My biggest push for giving Edgar a kidney was thinking, 'What if I don't need my two kidneys, and I die with both of them?' I have the opportunity to change someone's life," says John, who visited Valdosta to meet the pastor's family and congregation. He then came to Mayo Clinic's Florida campus in April for a week of testing.

"I was concerned that my health might not be as good as I thought it was," John says. "It was incredible the time Mayo not only put in to clear me to donate but also to ensure I was healthy enough to give Edgar my kidney."

John was approved to become a donor on May 6. The transplant surgery took place on May 17.

The day after the transplant, the two men had an opportunity to talk.

"I got a little choked up," John says. "I elected to do this because it was the right thing to do. It felt really good to do this. I didn't know when I made the offer what a great person he really is."

John says that since he donated his kidney, he's adopted a healthier diet. He quit drinking soda and walks about 10 miles a day. He's looking forward to getting back to the gym soon, too.

The experience, John says, "makes you realize that you spend your whole youth chasing wealth, and then you chase your health. I don't want to do that."

"I elected to do this because it was the right thing to do. It felt really good to do this. I didn't know when I made the offer what a great person he really is." — John Branson

John adds that the men consider themselves family now. And each is looking forward to a brighter future.

"I get texts from someone in Edgar's family every day. They're putting me on lists for family reunions. I have more family now than I ever had," says John, who now refers to his kidney recipient's three daughters as 'Sis.'

Edgar, of course, is beyond touched.

"What John gave me is priceless. It's a lifeline," he says. "When you have dialysis, there are so many restrictions. I've always been mobile and active. To be able to go see people and talk to folks, that's just a blessing to me. Now I can spend more time with my grandchildren and my wife. I'm excited for the future."