Beating the Odds Against a Deadly Cancer 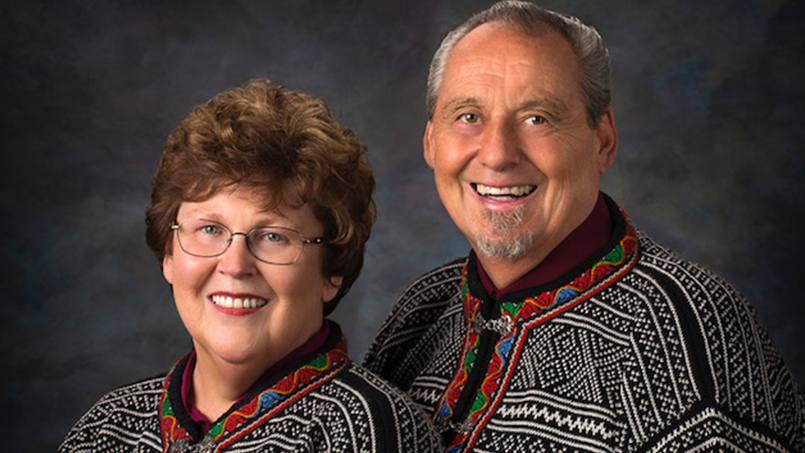 Clyde Erickson didn't exactly look death in the face and laugh. But laughter is one of the tools he has used to stay upbeat and mentally healthy for six years, despite having a blood cancer that claims many victims in a matter of months.

Along with his robust sense of humor, key to Clyde's battle with acute myelogenous leukemia, or AML — which the Duluth, Minnesota, resident was diagnosed with in 2011 — was a bold treatment strategy offered to him by his team of Mayo Clinic physicians.

"When Clyde came to Mayo, we did tell him that AML is a tough diagnosis," says Aref Al-Kali, M.D., of Mayo Clinic's Department of Hematology. "Even with the best chemotherapy, survival is limited. Half of the patients don't live six months."

Clyde cannot explain why his body responded to treatment when so many others don't, other than to say he believes his heritage may play a role. "I'm kind of this big Norwegian who just plods along and just doesn't think about things too much — including my leukemia," he says. "I don't dwell on it, and I don't necessarily believe that it's going to kill me."

"The odds are terrible with this cancer, but there is always a potential for a window of hope." — Aref Al-Kali, M.D.

From the moment Clyde and his wife of 54 years, Lynne, learned from his hometown physician that he had a potentially deadly cancer, the couple has followed a path of positivity that led them straight to Mayo Clinic's Rochester campus.

"I do think that having a positive attitude always helps, being involved in your treatment is great and being mobile and active is very important," Dr. Al-Kali says. "But it's not just one thing, it's the whole package."

In Clyde's case, seeking treatment at Mayo Clinic and being accepted into a clinical trial for AML patients — which was followed by a good response to chemotherapy agents and the ability to continue therapy at home under his Mayo physician's monitoring — are all factors that have played into his amazing success, according to Dr. Al-Kali.

"The odds are terrible with this cancer, but there is always a potential for a window of hope," Dr. Al-Kali says.

Hope was among the things Clyde and Lynne brought with them when they made the 250-mile trek from Duluth to Rochester in early spring 2011 with just overnight bags. Thinking Clyde would have some tests and perhaps speak with one physician, the Ericksons were unprepared for what greeted them at Mayo Clinic.

A range of tests, including a bone marrow biopsy, was followed by an appointment with Dr. Al-Kali. That led to admission the next day to Mayo Clinic Hospital, Methodist Campus, where Clyde spent the better part of the next four months.

Immediately after being admitted to the hospital, Clyde began receiving his first round of chemotherapy as part of the research clinical trial. After that, each month he was in Rochester, Clyde received five consecutive days of IV chemotherapy. As part of the trial, Clyde was first provided with a newer chemotherapy agent called clofarabine and second with an established, maintenance chemotherapy called decitabine.

The initial results looked promising. In September, tests showed the cancer was gone from Clyde's blood. He and Lynne were able to go home to Duluth. Not long after the start of 2012, however, Clyde's energy began to decrease. He returned to Mayo Clinic for additional testing.

"Clyde beats all the odds for relapse and for AML. … This is not impossible, but it's very unusual." — Aref Al-Kali, M.D.

Another bone marrow biopsy showed the cancer had returned.

"When the disease came back, we had only given one cycle of the decitabine, so I thought the best thing was to try it again and see what it would do," says Dr. Al-Kali. "It was a brave decision, because he failed on that drug. But I felt that, from my experience, one cycle wasn't enough. I thought he might get some benefit if he got exposure to more rounds."

So Clyde was given another round of the drug. The response was exactly what Dr. Al-Kali had hoped for. The cancer decreased, and that round of chemotherapy was followed by another and another. Clyde's body continued to respond well, and his cancer currently is in remission. To this day, Clyde receives the maintenance chemotherapy every six weeks at a facility in Duluth.

"The survival for AML patients who receive decitabine is only six months," Dr. Al-Kali says. "The survival for relapse is ... only a few months. Clyde beats all the odds for relapse and for AML. He's responded nicely and has been on it for years. This is not impossible, but it's very unusual."

The extraordinary result of Clyde's treatment is not lost on him and his wife. Although the chemotherapy can cause fatigue, Clyde and Lynne have done their best to take advantage of the years they've been given.

"My family puts all these plans in front of me, just like dangling a carrot in front of an old donkey," Clyde says. "They'll say, 'We've got this planned for three months or this in six months.' I am motivated to sit on the couch a lot, but they suggest all these different things. Sometimes I say, 'No, I'm just too darned tired. I'm not going to do that.' But most often I think, 'How many more times are we going to get to do this?' It does motivate me to do more."

"As long as it keeps working, we're going to keep doing it. That doesn't bother me. Nothing bothers me an awful lot." — Clyde Erickson

Clyde will continue to receive maintenance chemotherapy long-term to keep his leukemia in check. Stopping the therapy would most likely trigger a relapse of the cancer cells, says Dr. Al-Kali.

"As long as it keeps working, we're going to keep doing it," Clyde says. "That doesn't bother me. Nothing bothers me an awful lot."

That calmness is buoyed by an unfailing wit about his circumstances, adds Lynne.

"Clyde has a good sense of humor, and I do too. When we're together with our kids there's a lot of laughter. I really believe that it helps," she says. "It helps with your outlook and your physical well-being. And two of the things that are most important are to stay positive and to laugh when you can — laugh a lot."