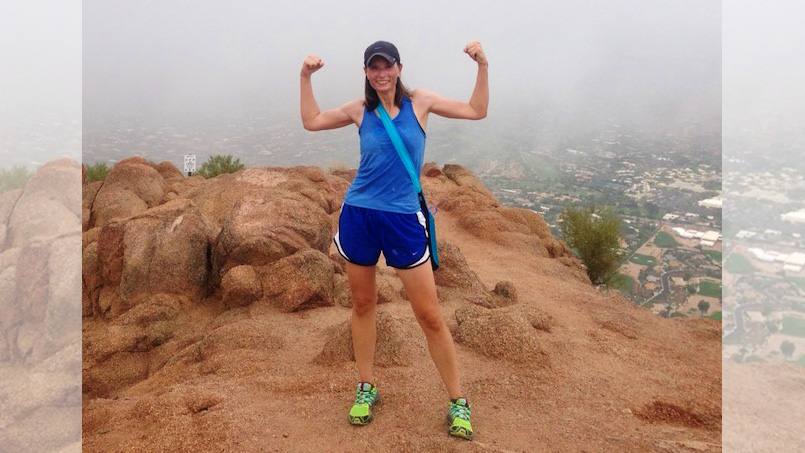 Being diagnosed with a rare, incurable lung disease, known as LAM, has slowed Angela Tewksbury down, but she's not out. By sharing her story, the Mayo Clinic microbiologist hopes to shed light on this uncommon disorder, so others can get prompt diagnosis and treatment.

When fitness enthusiast Angela Tewksbury began experiencing breathing problems during her workouts in May 2017, the 42-year-old guessed she was developing asthma or allergies as part of getting older. She never imagined that seeking advice from a Mayo Clinic pulmonologist about whether she needed an inhaler would lead to the diagnosis of an incurable disease. But that's exactly what happened.

Angela was diagnosed with lymphangioleiomyomatosis, or LAM, a rare lung disease. Now she's hoping her story draws attention to the hard-to-pronounce, progressive disease, which primarily affects women between the ages of 20 to 40.

Looking back, Angela, a microbiologist at Mayo Clinic's Arizona campus, believes the disease began affecting her as early as 2009. At that time she underwent a CT scan for esophageal concerns. The image also featured portions of her lungs, which showed shady spots. The blurry areas were noted as something that should be followed up on. That follow-up didn't occur, and neither did any symptoms, until 2017.

"The sooner you can get on the drug to stop the progression of the disease the better." — Angela Tewksbury

"It makes me wonder how many women are walking around with it and have no idea. They're walking around short of breath and thinking it's an asthma thing or an allergy thing," Angela says. "The sooner you can get on the drug to stop the progression of the disease the better."

While the average age of onset of the disease is 35, improved scanning technology has resulted in more women in their 50s, 60s and 70s being diagnosed, says Mayo Clinic pulmonologist Jay Ryu, M.D., who was chair of the National Heart, Lung and Blood Institute's LAM registry steering committee.

"The reason it affects mainly women is not entirely clear, but most think it has to do with LAM cells, which are the cause of the underlying disease and are thought to proliferate better in an estrogen-rich environment," Dr. Ryu says. "Women with higher levels of estrogen, particularly women in younger years, are more likely to develop the disease and experience progression."

Angela considered herself supremely healthy prior to her diagnosis. She did 60 to 90 minutes of cardio and lifted weights five days a week. Other than some difficulty getting deep breaths at the gym, nothing seemed out of the ordinary.

"I was going back and forth — was it allergies or asthma — I wasn't 100 percent sure, so I went to see a pulmonologist, Dr. Sista, here at Mayo," Angela says. "It wasn't happening a lot. But I thought, let's just go and make sure."

Ramachandra Sista, M.D., of Mayo's Division of  Thoracic Diseases and Critical Care, ordered a CT scan and a pulmonary function test for Angela. The morning of her CT scan, Angela had the test done and then went to work. As a Mayo Clinic employee, she could access her medical record, and she signed into her chart shortly after logging into her computer.

"I really felt fine, there were no red flags at all," she says. "I knew my CT was going to be negative. So I went in to look, and there was this diagnosis. And I was like, 'What's this?' Of course, I looked it up right away, and I was just horrified at what I found online."

Estimated to occur in about five people out of a million, the condition is thought to develop when LAM cells — abnormal, smooth, muscle-like cells — multiply in the body. As that happens, the cells can cause cysts to form in the lungs due to the release of enzymes called proteases. When the disease advances in the lungs, over time the lung tissue becomes replaced by cysts, which prevent oxygenated air from moving freely into the body and carbon dioxide from moving out. The cysts also can rupture, causing the lungs to collapse. Some people with LAM require oxygen therapy and others need a lung transplant.

"So oddly enough, as I'm finding out about my diagnosis and literally going through the emotions of learning about this ridiculous disease, I'm at the same time feeling like this is what's ahead in my life." — Angela Tewksbury

A few minutes after Angela read the word "lymphangioleiomyomatosis," her horror morphed into physical pain. With her thoughts racing as she tried to wrap her mind around diagnosis, she began having chest and back discomfort.

"I thought I might be having angina. I thought it might be from finding out about my diagnosis," Angela says. "But I was in terrible pain, and I told my boss I had to go home."

The next day, still suffering from significant pain in her chest, she set out for her pulmonary function test.

"I'm on my way there and in so much pain, thinking, 'How am I going to do this?' and my doctor called me."

Dr. Sista told Angela that the pain was a red flag. He directed her to skip the test and go straight to the Emergency Department for X-rays. When Angela walked into the hospital, a technician had her orders in hand and took her to Radiology. The X-rays revealed that her pain was due to a collapsed lung. The day earlier, just as she was learning the name of her condition and its grim prognosis, a cyst burst and the rush of air it released deflated her lung.

"So oddly enough, as I'm finding out about my diagnosis and literally going through the emotions of learning about this ridiculous disease, I'm at the same time feeling like this is what's ahead in my life," she says.

After reviewing the X-rays, Angela's care team decided to closely watch her lung to see if it would re-expand without an invasive procedure, such as inserting a chest tube. With that in mind, Angela was sent home. Over the course of the next few weeks, her lung did begin to re-inflate on its own.

She also started taking medication to slow down the disease progression. Now every two weeks, Angela is tested for how well the drug is working in her body.

"My hope is that this drug will keep me where I'm at pulmonary-wise, so I don't have to go on oxygen or get a lung transplant," Angela says. "I've been told if you do the right thing nutritionally and physically and take the medication, you are going to have a full life."

"You get the good and the bad. But you have to take the good as far as you can." — Angela Tewksbury

Keeping a good attitude and surrounding herself with supportive people has also helped her deal with her diagnosis, says Angela, adding that discovering the LAM Foundation and connecting with women like her was hugely helpful. She also feels that having a diagnosis, so she can manage her condition, gives her an advantage.

"I'm very fortunate that Dr. Sista went the extra step to do the CT test scan because a lot of doctors don't do that when you go in for asthma," she says. "I've read countless stories of women who have lungs collapse and the disease still isn't found. Mayo caught it immediately."

Although Angela hasn't been able to resume the intense workout regimen she maintained prior to her lung collapse, she still goes to the gym three times a week to perform light cardio and weight training. She has plans to travel to Vancouver, Canada, and intends on living as normal a life as possible.

"You get the good and the bad," she says. "But you have to take the good as far as you can."