Ankle Surgery Gives Swimmer Another Chance to Pursue Her Dreams 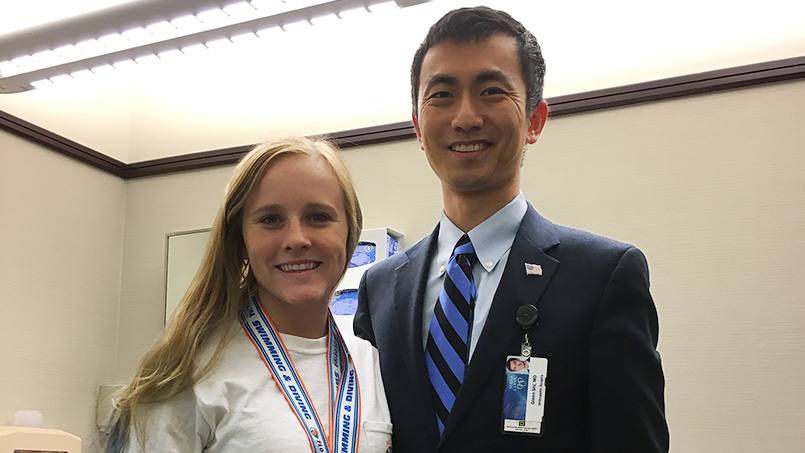 Frustrated by ongoing pain, Lexi Riley considered giving up on swimming — a sport she loves. But ankle surgery at Mayo Clinic solved the problem, and now Lexi is thrilled to be back in the pool.

Swimming means the world to Alexis "Lexi" Riley. But when an ankle injury left her with significant ongoing pain and made swimming difficult, she wasn't sure if she would be able to compete again, and she was devastated.

"I became extremely discouraged with the whole sport," she says. "I wasn't sure if I even wanted to continue swimming anymore."

But then Lexi's family sought care for her at Mayo Clinic's Florida campus with orthopedic surgeon Glenn Shi, M.D. And that has made all the difference. Today, Lexi is back in the pool, working hard and swimming at the collegiate level.

"Without Dr. Shi, she could not have done this. He was very much thinking long-term. We appreciate that because this is not something we want to do again," says Lexi's mom, Sara Dipaolo. "He had such a calming presence. You just trust him. If I were an athlete, I would go to him."

Lexi's connection to Mayo Clinic began at an early age when her mom established care at Beaches Primary Care Center in Jacksonville Beach, Florida. With a love for soccer and flag football, Lexi began seeing Jennifer Maynard, M.D., a family practitioner with a specialty in sports medicine.

After a concussion when she was 11 and another a short time later, Lexi was forced to seek out noncontact pursuits. She took up biking and running, though ultimately swimming became her focus. So much so that she set a goal of swimming in college and dreamed of making it to the Olympics.

"Without Dr. Shi, she could not have done this. He was very much thinking long-term." — Sara Dipaolo

But Lexi soon realized something else was putting her dreams at risk. Over the years, Lexi had bouts of pain when kicking in the pool. After a visit with a local orthopedist, Lexi learned that she had a rare ankle condition known as a peroneal tendon subluxation. The condition develops when the structures that form and support the tunnel housing the peroneal muscles of the leg are damaged or injured. This causes the peroneal tendons to snap out of place.

Lexi underwent several surgeries at another local hospital in attempt to correct the disorder. After a surgery in 2013, Lexi was able to participate on her high school swim team for three years without any issues.

The relief from pain was, unfortunately, not permanent. In January 2016, Lexi rolled her right ankle, and the condition resurfaced.

"I felt a sharp pain when the tendon would snap, and walking was very painful," Lexi says. "It started hurting worse and worse over the summer. It was keeping me up at night because it was so painful." 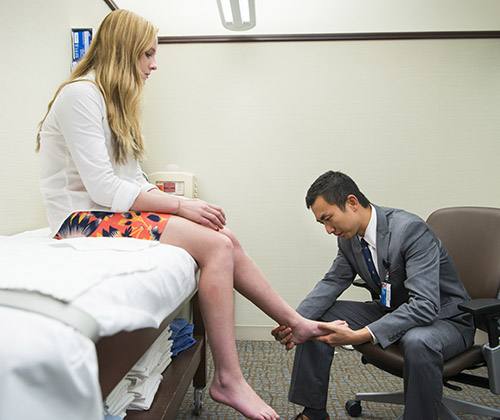 Still the dedicated athlete continued her two practices a day, six times a week. But her discomfort got worse. In time, she couldn't kick or push off the wall while she was swimming, due to the pain. At that point, she was certain her swimming career was over.

That's when Lexi and her family turned to the expertise of Mayo Clinic and Dr. Shi. He confirmed that the bony shape of Lexi's ankle was causing the ongoing problem. The earlier procedures hadn't addressed the fact that due to its shape, her ankle didn't have enough space for the tendons. That was having a direct effect on her performance in the pool.

"When swimmers kick, they are placed in position where the tendons are prone to subluxation," Dr. Shi explains. "The pain and inflammation affects their ability to produce a powerful kick."

In August 2016, Lexi underwent groove reconstruction surgery on her right ankle. During the two-hour procedure, Dr. Shi deepened the groove through which the tendons of the peroneal muscles pass, so they would stay in place.

"We go in and shave the bone to create space for the tendon, so it stabilizes," Dr. Shi says.

A few weeks after surgery, Lexi got back in the water. It was her senior year, and she dreamed of competing in the state swimming championship. To qualify, she'd need to participate in the district and regional competitions. With Dr. Shi's blessing, she signed up to race in an October meet. Then in early November, Lexi swam in the regional competition.

"It was my first real meet when I was going full speed, and I qualified for the state competition," Lexi says.

That competition was just a week later on Nov. 11. Lexi swam in the 400-free relay. Her performance helped her high school team win its 27th consecutive state title.

"For her to be on that relay was amazing. It was epic!" Sara says. "She burst into tears when she realized they won."

"It was amazing when we realized we'd won, and it was the final event of my high school swimming career. It was a very awe-inspiring moment," says Lexi, who adds that she is grateful to Dr. Shi for making her return to competitive swimming a reality.

"He knows what he's doing," she says. "He's very confident and kind. He was very supportive."

When Dr. Shi learned of the victory, even the doctor was impressed.

"She went above and beyond my expectations," he says. "I am overjoyed."

In December 2016, Dr. Shi performed the same groove reconstruction surgery on Lexi's left ankle. Since then, Lexi has healed well. Now she's on the swim team at the College of Wooster in Ohio. She's looking forward to participating in the college's conference championships and is working toward her goal of making the NCAA national championships.

Learn more about Lexi's story in this video: