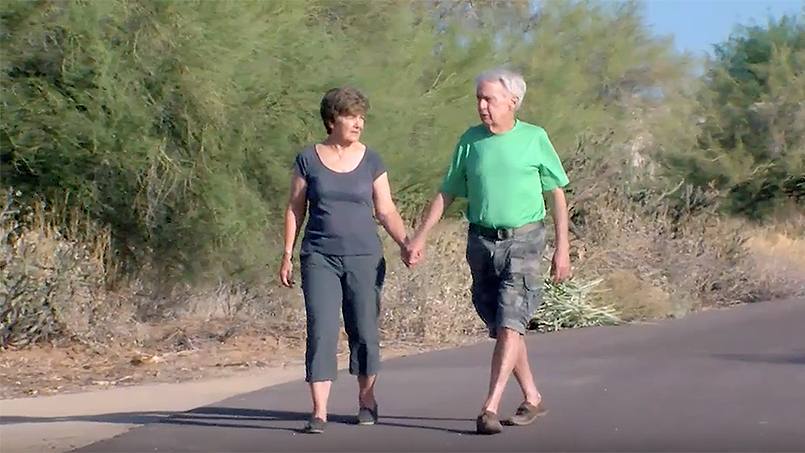 When Vincent and Sandra Streech were diagnosed with cancer, the husband and wife turned to Mayo Clinic. The pair each received treatment through clinical trials, and today the future looks more promising for both of them.

When Vincent Streech was diagnosed with lung cancer, he knew he would be in for the fight of his life. After his initial treatment failed, doctors gave him one year to live. Refusing to give up hope, however, he searched for other treatment options, which led him to Mayo Clinic.

"For me, it would be reputation more than anything else. Mayo Clinic is very well known worldwide," says Vincent, reflecting on his decision to seek care at Mayo Clinic's Arizona campus, where he met oncologist Helen Ross, M.D.

"Vincent had some treatment elsewhere before he came to see me. So his cancer had initially been operated on, and they were hoping that that would solve the problem," Dr. Ross says. "But unfortunately, he had some little, tiny other spots in his lungs that over time developed into other tumors, a sign of metastatic disease."

Based on Vincent's situation, Dr. Ross felt he would be a good candidate to participate in a clinical trial.

"He had already had some chemotherapy after the initial surgery. So this was the next type of treatment to do," says Dr. Ross. "He was an excellent candidate to go on to something new, especially something that was targeted exactly toward cancers like his."

Vincent says he and his wife, Sandra, appreciated having Dr. Ross and an integrated team of specialists working together on his treatment options. The depth of clinical trials offered at Mayo Clinic's Arizona campus was a big factor in their decision to choose treatment at Mayo Clinic.

"I don't think we could have gotten the same treatment, the same care, that we got at Mayo anywhere else. I think we're right where we need to be." — Sandra Streech

"The way I look at a clinical trial is that you've got great minds that are exploring different ways of treating things," Sandra says. "Vincent has been through three of them. The first two were not effective. The one that he's on now is. It's stabilized his tumors."

As Vincent continued his treatment, the couple was dealt another tough blow. Sandra felt a lump in her breast and was diagnosed with stage 2 breast cancer. She also sought care at Mayo Clinic's Arizona campus. Her oncologist, Donald Northfelt, M.D., told her she, too, qualified to participate in a clinical trial. The treatment could potentially shrink her tumor.

"At the time that she came for consultation, we happened to have clinical trials available that were testing new preoperative antiestrogen strategies for the care of her condition," says Dr. Northfelt, associate medical director of Mayo's Breast Clinic in Arizona. "We felt that as a result of her participation in this study, her tumor got smaller. That allowed for an easier, more successful surgery to be accomplished."

Sandra says she was relieved her tumor shrank, so she was able to opt for a lumpectomy procedure.

"I was fortunate to have access to researchers and fortunate enough to have an artist of a surgeon in Dr. Barbara Pockaj," Sandra says. "It's just been a wonderful experience at Mayo. I don't think we could have gotten the same treatment, the same care, that we got at Mayo anywhere else. I think we're right where we need to be."

Learn more about Vincent and Sandra Streech's story in the video below.