Halfway Around the World and in Need of a New Liver 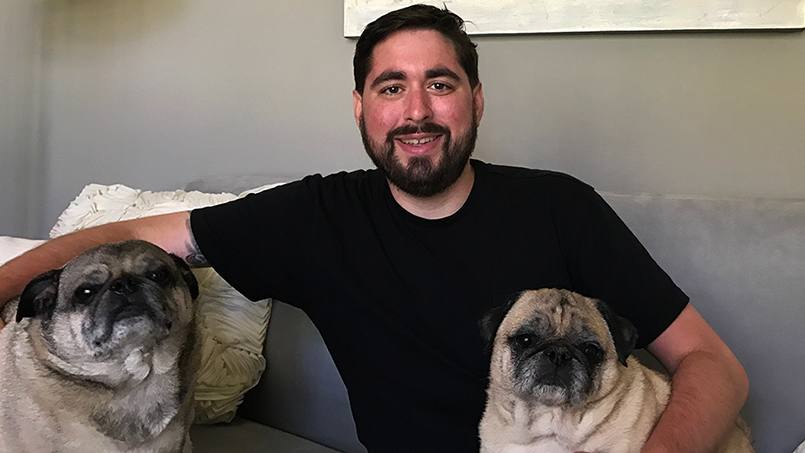 After an extended hospital stay followed by a flight across the globe with his survival in question, Tom Walsh came to Mayo Clinic, where he received a lifesaving transplant.

When Tom Walsh went to teach English in Japan, he couldn’t have imagined the odyssey that lay ahead of him. A trip to the doctor due to abdominal pain ended up landing the 25-year-old from St. Augustine, Florida, in an Osaka hospital for a month. His condition mushroomed into liver failure that eventually required a trip to the other side of the globe for a liver transplant. But getting there would not be easy.

Key to a happy ending to Tom's ordeal was his father, John Walsh. Determined to get Tom home, John traveled from Florida to Japan twice in two months. He was eventually able to return to the United States with his son, so Tom could receive the medical treatment he needed to stay alive. Today, John credits Tom's care team at Mayo Clinic for his son's return to good health.

"He was basically dying the first week in June, and thanks to the Mayo doctors and the staff he's sitting here right now," John says.

Although he wasn't diagnosed until age 17, Tom was born with a condition known as alpha-1 antitrypsin (AAt) deficiency, a genetic disorder that can cause lung or liver disease. Alpha-1 antitrypsin is a protein made in the liver that helps protect the lungs and other organs.

"AAt deficiency is not very common" says Andrew Keaveny, M.D., medical director of the Liver Transplant Program at Mayo Clinic's Florida campus. And among the small group with the deficiency, he says, "liver disease only occurs in about 15 percent of patients with the appropriate genetic makeup."

Unfortunately, Tom didn't get the benefit of those odds.

"He was basically dying the first week in June, and thanks to the Mayo doctors and the staff he's sitting here right now." — John Walsh

When he went to the hospital in Japan, Tom quickly learned he was dealing with much more than just abdominal pain. His medical situation was serious. The doctors told Tom his liver enzymes were elevated. That can indicate inflammation or damage to cells in the liver. In his case, they indicated a serious liver problem, and doctors warned him he was at high risk for internal bleeding and potentially a coma.

Tom's father flew to see him in late April 2017, hoping to bring him back to the U.S. for care. The Japanese physicians warned it was too dangerous for Tom to travel or even to be moved to another medical facility. At that time, John returned to the U.S.

After several more weeks without any improvement in Tom's condition, John sought a review of his scans and lab work from Tom's primary care doctor in St. Augustine, Florida. The physician advised John that although it was risky for Tom to travel, if his son stayed in Japan, it was unlikely that he would survive.

In early May, John flew back to Osaka — this time to bring his son home. To reduce the risk of medical complications during the long flight back to Florida, Tom took blood thinners to help prevent a pulmonary embolism. When they arrived in Jacksonville, a local liver specialist performed a liver biopsy, as well as paracentesis — a procedure to remove the fluid that had accumulated in Tom's body due to advanced liver disease.

Several days later, over Memorial Day weekend, Tom ballooned up again due to excess fluid. He was feeling increasing pain and taken to a different health care center for another paracentesis. Recognizing Tom would need a liver transplant, doctors there referred him to Mayo Clinic.

On May 31, Tom met with Mayo Clinic gastroenterologist Barry Rosser, M.D. By June 8, he was on the national transplant waiting list. A liver became available for Tom the next day. Transplant surgeon Justin Burns, M.D., performed the surgery, and it was a success.

"From the patient care techs to the world-class surgeons, the patient care was amazing. And for me, the biggest thing was that they were really kind and helpful to me and my family." — Tom Walsh

Today, several months after his transplant, Tom is doing well and says he feels better physically than he has in quite a while. He's now looking forward to becoming a high school social studies teacher.

Reflecting on his experience, Tom says he is particularly grateful for the personal attention he and his family received from his care team at Mayo Clinic.

"When I woke up from the surgery and my eyes were already clearing of jaundice, I felt everything was going to be okay," he says. "From the patient care techs to the world-class surgeons, the patient care was amazing. And for me, the biggest thing was that they were really kind and helpful to me and my family."

Just like Jacksonville and St Augustine recover from hurricanes, so will you. I am a Mayo JAX patient too, but to early for a transplant.