Finding Blessings in My Battle With Leukemia 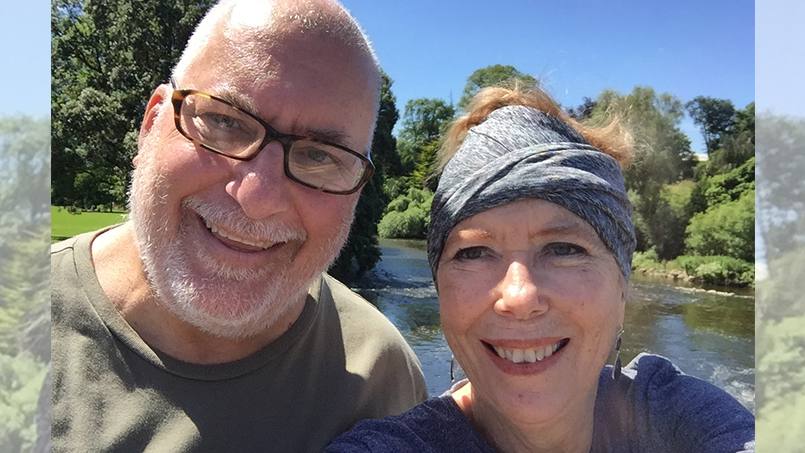 Janie Magruder reflects on her cancer diagnosis and treatment, including a crucial stem cell donation from an unlikely source that helped to save her life.

I must have looked like a deer caught in the headlights.

"You're going to be fine," whispered my nurse after getting me settled in my hospital room at Mayo Clinic in Phoenix, Arizona, on Feb. 20, 2016.

"This is a marathon — an ultra-marathon — but it is curable," reassured one of my doctors.

"We're going to get you through this."

"This" was acute myelogenous leukemia, a blood cancer that I knew little about, and that, as risk factors go, I wasn't likely to get. I wasn't old enough. (Most patients are at least 65.) I was the wrong gender. (Men are more likely to be diagnosed with AML.) I had no other blood disorders. I'd never been treated for previous cancer with radiation or chemotherapy. I hadn't been around benzene or other dangerous chemicals, and there was no exposure to a nuclear reactor incident in my past. In fact, I'd been so healthy all my life, I could count on one hand the times I'd been hospitalized.

My husband, Jack, and I were shocked and terrified at the news. But it turned out I was very blessed. Here's how …

My parents raised me to believe in God, and I've never lost that faith. I believed, too, that he had a plan for my life, that he was the ultimate healer, and that he would never leave my side. Many nights in my hospital room, I clutched my late mother's "Jesus rock," as she called it. It just fit in the palm of my hand, as it had in hers. I prayed a lot, and I had a team of prayer warriors in my family, my church and around the country who were praying for me, too. I clung to my faith.

My family and friends

Nobody diagnosed with cancer knows how to deal with it, nor do their family members or friends. There's no training for such devastating news. What do you do, say, think? What should you read and what should be avoided?

That said, you would not have known that my husband, Jack, was not schooled in cancer-patient caregiving. From the first, Jack didn't let on how scared he was. He simply bravely carried on. He kept working. He kept caring for our home, our youngest son, and our two dogs. Jack kept showing up. I don't know how he did it.

"Nobody diagnosed with cancer knows how to deal with it, nor do their family members or friends. There's no training for such devastating news." — Janie Magruder

He and I agreed we would take everything one day — sometimes one hour — at a time. He visited me every day, sometimes twice a day, and kept in touch with our family members and friends. We promised we would try to maintain a positive outlook about my treatment and recovery, not just to convince ourselves that things were going to be OK, but also for our children.

Our three sons bolstered us with funny texts and snippets of news from their busy lives. For my birthday, which fell after three rounds of chemotherapy, they gathered at our home in Tempe. I was home from the hospital, and we played board games. I was struggling with pleurisy at the time and had to stand up most of the time to make the laughing at their jokes less painful. My guys colored pages in coloring books with me — something none had embraced much when they were young — and I hung the resulting art in my hospital room when I had to go back.

Mayo Clinic's reputation for being the best in the world, for focusing on the patient and providing comprehensive care, is deserved. I was so blessed by a rock star team of hematologists, compassionate nurses and accommodating, kind, staff members.

I met my primary hematologist, Dr. Jeanne Palmer, on Feb. 22, 2016. She wrote on the white board in my room the details of my induction and consolidation therapies in which chemotherapy would be used to kill every leukemia cell in my blood and bone marrow. I looked at that board a dozen or more times a day, trying to reassure myself about what was to come.

Dr. Palmer informed us that the best chance for my recovery was to have a stem cell transplant, and we didn't second guess her. There would be more on that later, Dr. Palmer said. But for now, it was one day at a time. My first chemotherapy treatment began at 5:15 p.m. on Wednesday, Feb. 24.

When side effects from the chemotherapy struck, whether skin rashes or mouth sores or stomach pain, Mayo physicians arrived immediately to diagnose and treat. A Mayo ophthalmologist visited me in my hospital room on a Friday night to test my eyesight. An added bonus: he prayed for me after asking my permission. The nurses demonstrated their dedication every day. There are really too many examples to include here, but a few stand out.

"I was so blessed by a rock star team of hematologists, compassionate nurses and accommodating, kind, staff members." — Janie Magruder

My first room had a small window with just a sliver view of a concrete courtyard below. When one of my nurses learned my initial stay would be for more than 30 days, she asked if I would like a room with a better view. I jumped at the chance. The next morning, the nurse manager wheeled me into a room with a window pointed at the McDowell Mountains. I sat in front of that window for hours, watching the birds in the mornings, the clouds roll in in the afternoons, and the headlights of cars on the freeway at night.

My nurses cheerfully cleaned me up when I got sick, or when I was too weak to take a shower or get to the toilet. They were attentive to my IV, and ultra-careful with my infusions and medication needs. Several noticed posters on my wall that were created by colleagues at Grand Canyon University. They shared stories of being a graduate of, or enrolled at, GCU's fine nursing school. Some prayed over me, which meant everything.

When my long red hair began falling out on my pillow, a nurse gave me a buzz cut by the mirror in my room so that I could get used to my baldness gradually. They came when I called, and let me be when I needed it. They were attentive to Jack and our sons, offering warm blankets, crackers and juice, not just to me, but for them, too.

I can't say enough about the staff at Mayo. The chaplain's office offered spiritual guidance and blessed my transplant procedure. The young men who piloted me in my wheelchair to various procedures and tests were kind and funny. The people who cleaned my room were respectful and sweet. The business office patiently helped with insurance, and the bone marrow transplant office gave us a thorough tutorial on how they would find me a donor.

Mayo Clinic worked to find the best possible peripheral stem cells donor for me, first ruling out family members and then accessing Be the Match, the national bone marrow registry. By early spring, we found a donor candidate. His selection was based on HLA, human leukocyte antigens, that are markers on most cells in a person's body. The immune system uses them to determine which cells belong in the body and which do not. My potential donor was a perfect match based on 10 HLA markers.

Following a series of tests that confirmed he was healthy enough, my donor received injections to increase his blood-forming cells. He later went to a hospital to have blood removed from one arm. The blood then passed through a machine that separated out those blood-forming cells. The remaining blood was returned to him through the other arm.

His bag of cells was transported to Phoenix, and, following a blessing ceremony by the chaplain, the contents were infused into the central line in my chest. About 100 days later, a blood test revealed that my donor's cells were thriving in my body.

For more than a year, I knew very little about the young man who helped save my life because of Be the Match privacy requirements that protect the patient and the donor. But last July, he consented to sharing information, and that same month, we spoke on the phone. I didn't know what to say, which doesn't happen often.

Jack Milligan, now 21, is a senior at Texas A&M University in College Station, where he will graduate with a degree in economics this spring. He signed up with Be the Match in the fall of 2014 because it was the charitable cause of Delta Tau Delta, the fraternity for which he was pledging.

"As I approach the 18-month anniversary of my second chance at life, I am so grateful to God, my family and friends, my donor and Mayo Clinic. Every day being cancer-free is a gift." — Janie Magruder

Jack, now president of Delta Tau Delta at A&M, told me recently that six other young men in the chapter have donated bone marrow to save people's lives, and dozens more Aggie Delts have added their names to Be the Match. The fraternity's commitment to saving lives is so extraordinary that Be the Match is planning to erect a billboard in honor of Jack and his brothers later this year in College Station.

"We are blessed. We are lucky," Jack said about his fraternity. "This definitely feels like there's some kind of magic to it."

Jack said he was moved to donate his cells because of his mother.

"My mom is the most compassionate person I've ever met, and I've learned how to be more compassionate from her," he says. "If this was to happen to my mom, I'd be devastated.

But I'd want to know that someone was there who was willing and able to save her life. Why would you not do that if you could?"

As I approach the 18-month anniversary of my second chance at life, I am so grateful to God, my family and friends, my donor and Mayo Clinic. Every day being cancer-free is a gift.